What’s So Special About the Deathstalker Scorpion?

How an obscure arachnid from the deserts of the Middle East and Northern Africa rocketed to media stardom, and has even saved lives. 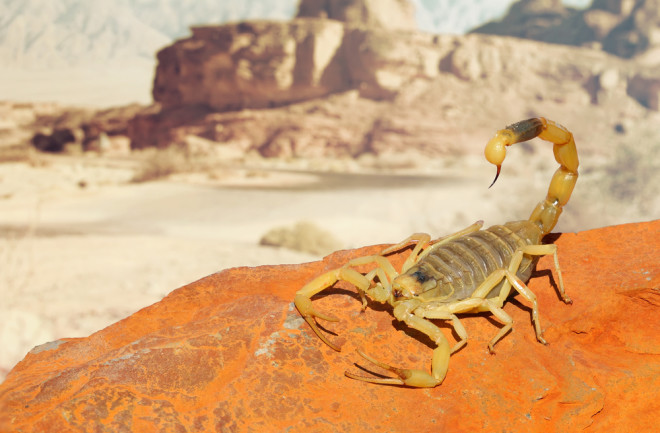 Its venom has been called the most expensive liquid in the world — also one of the deadliest. Does the deathstalker scorpion live up to the international hype, or is it just another victim of popular science exaggeration?

As it turns out, its reputation is probably deserved. But it’s been amplified by a generous dose of PR magic and some sloppy reporting.

Known until relatively recently as the yellow scorpion, the deathstalker was just a desert-dwelling arthropod, picking off insects with its lethal sting and spending the rest of its time hiding under rocks. Then, the use of its venom in a series of remarkable cancer treatment innovations catapulted it to greater renown. Likely because the name “yellow scorpion” isn’t particularly attention-grabbing, it eventually became known as the deathstalker instead. A deadly scorpion saving lives? Click. So far, so good. Nothing wrong with a sprinkling of stardust in the name of promoting science literacy.

Then, the press got its scorpions scrambled. “By volume, scorpion venom is one of the most precious materials in the world. It would cost $39 million to produce a gallon of it,” Stanford University chemist Richard Zare said in 2019. Popular coverage soon claimed that this figure was specific to deathstalker venom. But Zare was actually discussing an unrelated study on the applications of venom from the Diplocentrus melici scorpion, which is found in Mexico. He was referring, in any case, to scorpion venom more broadly.

“If it was the most expensive liquid in the world, I'd be driving a Ferrari and not an old Ford truck,” says Nathaniel Fränk of MToxins Venom Lab in Oshkosh, Wisconsin, one of the world’s few suppliers of pure, research-grade venom.

Scorpion venom is costly to produce because it requires painstaking and risky labor, Fränk says, resulting in only a tiny output from each scorpion. While the venom does go for a premium, that’s true of venom from all scorpions.

Compared to other species, deathstalkers aren’t particularly rare. Easy to maintain and breed in captivity, they happily subsist in tanks and feed on crickets. Despite the high price, venom labs typically only purchase tiny quantities of venom — so it isn’t very profitable. The rest goes toward nutraceutical and antivenom applications, which are far cheaper due to volume discounts.

The misunderstanding that deathstalker venom was a goldmine waiting to be exploited unfortunately led to a scam industry based in the Middle East. Misguided entrepreneurs gathered hundreds of scorpions and bred thousands more in the hopes of selling their venom to labs. In addition to depleting populations in some areas, these efforts have typically ended in financial ruin: Reliable labs only buy or sell venom if it’s been harvested in sterile conditions by professionals. Frank notes that his pharma clients have occasionally gotten scammed by these suppliers. Commonly full of dirt and scorpion parts, the improperly harvested venom has to be discarded.

Ultimately, the viral claim that the deathstalker is among the world’s deadliest scorpions appears to have some validity. While most people recover from deathstalker stings following the administration of antivenom, they can be lethal, especially in children. Mild cases may result in elevated heart rate and sweating, among other symptoms, while fatalities typically result from cardiac and respiratory failure.

Rigorous statistics are hard to come by, though. Because much of its range is remote and identification is not always certain, encounters are not systematically recorded. And there’s another wrinkle: Originally categorized as a single species, Leiurus quinquestriatus, certain deathstalkers have now been reclassified into as many as twelve different species spread across the Middle East and Northern Africa, where half of the world’s scorpion deaths occur.

As dangerous as they are, these scorpions have actually saved lives, too. Like all venoms, the toxic substance produced by deathstalkers contains a multitude of compounds. Most significant among them: amino acid chains known as peptides, which interfere with cellular processes by interacting with ion channels. These channels regulate cell volume and are crucial to the nervous system and muscular functioning. Altering their function can cause paralysis — allowing the scorpion to dine on its immobilized insect prey at leisure.

A 1993 paper described one such peptide, called chlorotoxin due to its ability to inactivate chloride ion channels. A researcher had found that chloride channels were interfering with his observations on separate sodium channels. “On a long shot, we took some of [the deathstalker] venom, and tossed that in. We were able to get rid of the chloride channels,” recalls coauthor Gary Strichartz, director of the Pain Research Center at Harvard Medical School’s Brigham and Women's Hospital. Having previously detected that the venom blocked chloride channel functioning, the team isolated the compound responsible. They noted the finding and returned to other nervous system research.

Two years later, Strichartz heard from neuroscientist Harald Sontheimer, then at the University of Alabama. Sontheimer was studying an aggressive brain cancer called glioma. His team had discovered that the scorpion-derived chlorotoxin would bind to glioma cells and could potentially slow the cancer. He wanted to know whether the compound had been patented. It hadn’t. They had the go-ahead to use it.

Though chlorotoxin inhibited tumor growth on its own, Sontheimer and his collaborators decided to enhance its effect by adding a radioactive iodine molecule. “If the peptide binds to the tumor cell, it will strategically deliver radiation just to the tumor,” he explains. They used a synthesized version of chlorotoxin, yet another blow to the notion that pure deathstalker venom is liquid gold.

Because most other mammal cells lack chloride channels on their surfaces, chlorotoxin only latched on to the glioma cells. They encountered remarkable results: in clinical trials, the treatment nearly doubled the life expectancy of participants. Unfortunately, the next phase of the trials coincided with the 2008 stock market crash fallout. The company founded by Sontheimer to subsidize the research sold the drug rights in 2011, and further trials of the treatment have since stalled.

Chlorotoxin research has continued, though. Jim Olson of the Fred Hutchinson Cancer Research Center in Seattle found a way to attach fluorescent molecules to chlorotoxin — an innovation known as ‘tumor paint.’ When the modified chlorotoxin binds to tumor cells, imaging techniques can illuminate them.

Because gliomas can be hard to distinguish from healthy brain tissue with the naked eye, lighting them up allows for greater surgical precision. The technology is now undergoing FDA review. “It would be lovely to see this expanded for other kinds of cancer and someday used for screening for cancer,” Olson enthuses.

Other scientists are now using chlorotoxin to target cancer cells with innovative gene therapy and immunotherapy techniques. With contributions like these to its credit, it’s only a matter of time until the deathstalker storms the headlines again.