Fluorescent Dye for Tumors Is Now Being Tested in People 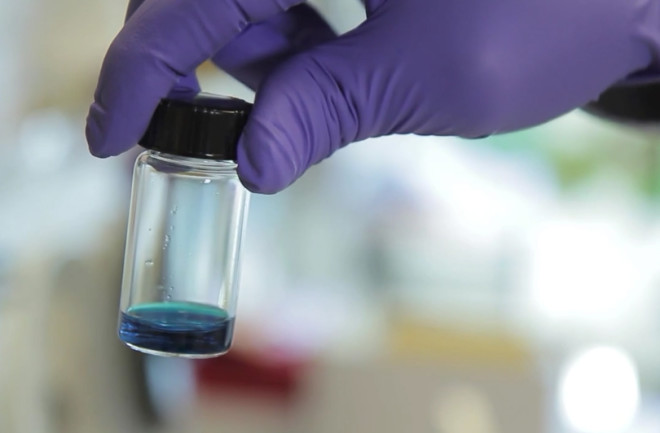 A vial of Tumor Paint. (Credit: Blaze Bioscience) Venom from one the world’s most dangerous species, the Israeli deathstalker scorpion, could someday save cancer patients’ lives. A cancer-detecting molecule found in the venom, when paired with a glowing dye, is providing scientists a new way to see tumors during surgery. The experimental product, called Tumor Paint, could someday help doctors locate and excise deadly tumors with precision. Now, the company has begun testing the paint in a small group of human patients for the first time.

Brain tumors are among the most problematic for doctors to remove. A brain tumor can often be detected with an MRI but surgery becomes much more complicated. It’s incredibly difficult for doctors to tell the difference between healthy brain tissue and cancerous tissue; and they rely on their eyes, fingers and thumbs to search for their target. The stakes are high: If a tiny bit of healthy brain tissue is mistakenly sliced away, the patient could wake up from surgery an entirely different person. But if cancer is left behind it could again spread. So Jim Olson and his colleagues at the Fred Hutchinson Cancer Center in Seattle devised an unorthodox solution: make the tumors glow. And deathstalker venom was the perfect molecular matchmaker for the purpose.

Deathstalker venom contains a molecule called chlorotoxin which, on its own, is harmless to humans and has an interesting side talent: if injected into the body, chlorotoxin binds onto cancer cells and absolutely nothing else. To this molecule researchers attached a dye that glows under near-infrared light. The resulting Tumor Paint can be used during surgery to make tumors glow a brilliant green, making it easy for doctors to see cancerous tissues in real time.

On to Human Trials

The tumor paint has already been shown to work well in mice and dogs, and now clinical trials will begin with humans at Cedars Sinai Medical Center in Los Angeles. Chirag Patil, one of the medical center’s surgeons, told NPR they’ve used tumor paint in about six patients with brain tumors. The goal of this first human study is simply to see if the paint reaches tumors and if they actually light up. Based on what Patil told NPR, it appears to be working:

"The first case we did was a deep tumor," says Patil. "So with the camera, we couldn't really shine it into this deep small cavity. But when we took that first piece out and we put it on the table. And the question was, 'Does it glow?' And when we saw that it glows, it was just one of those moments ...'Wow, this works.' "

Blaze Bioscience, the company Olson founded to manufacture tumor paint, says it can be used to detect breast, prostate, lung, colon and solid tumor cancers as well. Future studies of tumor paint will determine whether the paint helps surgeons and leads to better outcomes for patients. While using molecular beacons to light tumors is a step in the right direction, the ultimate goal is to cure cancer without invasive surgery. Perhaps, rather than dye, a cancer-fighting drug could hitch a ride on a tumor-targeting protein. That, according to NPR, is something several research groups, along with Olson, are working on.