The sailfish is the fastest fish in the ocean and it uses its dorsal fin for speed and hunting. 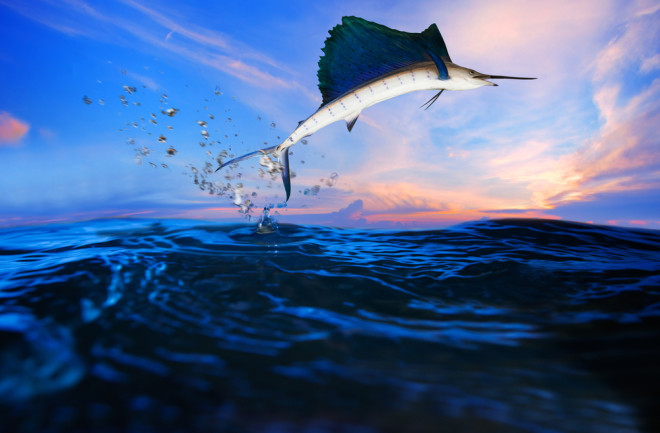 While fishing off the coast of Florida, a 73-year-old-woman was injured by a sailfish. Caught on the line, the near 100-pound sailfish changed the boat, lept from the water and stabbed the woman in the groin area. She was taken to a hospital and is expected to recover.

The sailfish is a large, blue-gray fish found in the warmer waters of the Atlantic, Pacific and Indian oceans. Broken into two subspecies, Istiophorus platypterus and Istiophorus albicans, they get their names from the sail-like dorsal fin on their back. Like the swordfish and striped marlin, I. platypterus and albicans are members of the billfish family. They have a sharp bill they use to slash and stun prey. While their meat has little value to consumer markets, they are a favorite catch in recreational fishing (catch-and-release).

Fastest Fish in the Ocean

Researchers dub the sailfish as the “fastest fish in the ocean,” since they can reach speeds of nearly 70 miles per hour. When flattened, their dorsal fin can help turn the sailfish into a torpedo that shoots through the water.

The sailfish’s speed allows it to jump great lengths out of the water. This also helps them move faster because they are moving through the air instead of water. Air is much less dense than water so it is easier to move through, conserving energy.

Their Dorsal Fin is a Tool

It’s clear that the sailfish’s dorsal fin looks like an actual sail. The dorsal fin runs nearly the length of a sailfish’s back, and in most cases, it’s taller than the width of their body. Sailfish have an average weight of about 120 pounds — experts recorded their heaviest weight at 220 pounds.

They spend most of their time in the warmer surface waters, though it’s believed that they can dive up to 1,100 feet to find prey. Sailfish work together in a group to catch prey — boxing in a school of fish with their dorsal fin until the school forms into a tight ball.

Then, using their long bill, the sailfish will slash at their prey, stunning or injuring it. Once the prey fish is away from the school, they swoop in to consume it.