What Old Dogs Can Teach Us About Aging

Scientists are studying different dog breeds to gain new insights into the aging process — both for them, and for us. 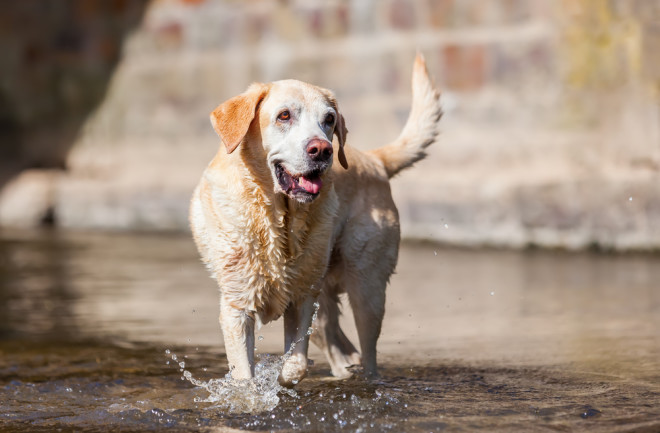 For many of us, our dogs are our constant companions. Whether collie or retriever, purebred or mutt, dogs climb mountains with us, travel on airplanes with us, and eat the scraps off our plate.

And as we get older, so do they. In fact, dogs experience a lot of the same age-related changes that humans do, from greying hair and creaky joints to more serious conditions like cancer or cognitive decline. Today, scientists are learning how comparing different dog breeds can give us new insights into the aging process — for both our canine companions and their owners.

One major project currently underway is the Dog Aging Project. Headquartered at the University of Washington, the project is working with dogowners across the country, gathering info about their pets’ lives, lifespans and medical ailments.

The project has more than 32,000 dogs already enrolled, though co-director Daniel Promislow says it’s kind of just getting started. “Over this past year, we've sort of launched into the next phase, which is pretty exciting,” says Promislow. One key development: Building out their logistics network, like where to store computer data and physical samples and how to make that data easy to sort through. The second development? Time.

The scientists behind the project hope that this wealth of data could soon be used to see which health problems are commonly found together, and even figure out how long problem may lead to another. “Once we move into this longitudinal phase, which we're now doing, we can identify how something that happens early in a dog's life eventually impact his health late in life. That's the real power of discovery,” says Promislow. “Years in the future, a veterinarian could enter some information about the clinical history of a dog and know that a particular diagnosis was more or less likely.”

They’re also collecting DNA samples from the dogs, which could help reveal the underlying genetic causes of disease. Beyond that, dogs in particular present a rare opportunity for researchers thanks to the artificial selection pressures that have shaped them.

It's All in the Genes

Exactly when and where dogs were first domesticated is a matter of debate, but scientists think it was at least 14,000 years ago. Since that fateful day, breeders have shaped our canine companions by repeatedly choosing for specific traits like intelligence, attitude, or speed.

Read More: Dogs Have Co-Evolved with Humans Like No Other Species

The signs of this artificial selection and in-breeding are visible in dogs genetics or, more specifically, the amount of variation in their genetics. “Across all dogs, it's about the same as us genetically,” says Promislow. “But within a single breed it’s like having a whole bunch of full siblings. Or even closer.” This means that specific breeds of dogs may have traits built into their genes. Variation in a gene known as IGF1, for instance, accounts for nearly half of all size differences between breeds.

What does this actually mean for researchers, though? Essentially, if a particular problem shows up frequently in a given breed, it may be due to something in that breed's genes. The IGF1 gene has been implicated as influencing both size and lifespan, possibly helping explain why large dogs tend to die younger than small ones, though it’s still being researched. Meanwhile, variants in a gene called SLC2A9 may be behind the high rate of urinary problems in Dalmatians, whereas a gene region called CDKN2A/B could contribute to the high rate of certain cancers in Bernese Mountain Dogs.

Looking at cancer in particular helped kickstart another major project, the Golden Retriever Lifetime Study, says pathologist Janet Patterson-Kane, the project’s principal investigator. The research team has recruited a one-time cohort of over 3,000 golden retrievers and have been going since 2012. By looking at just one specific breed, they can zero in on the effects of individual genes.

Plus, the fact that researchers are studying one breed helps them see things beyond just genetics, as well. Because the dogs are quite similar genetically, you may be more likey to tease out the influence of something environmental or dietary to their health, says Patterson-Kane. "There's a power in taking dogs that are quite similar to each other, and then you're looking at the factors acting upon that,” says Patterson-Kane.

What’s more, studying how dogs age could help us not only help our pets, but ourselves, too. The SLC2A9 gene that causes Dalmatian urinary problems also exists in humans, for example, and could be the target of future research.

And with regards to environmental exposure, because our canine companions get exposed to a lot of what humans do — like home pesticides, second-hand smoke, or even asbestos — and suffer the same problems humans do, a dog’s health may serve as warnings for their owners. Studies suggest that a pet dog contracting a type of lung cancer called mesothelioma could be an early warning sign of asbestos exposure for the humans in the household.

Both The Dog Aging Project and The Golden Retriever Lifetime Study are still ongoing, though the researchers behind the latter say they’re now coming to the end of many of their enrollee dogs’ natural lifespan. “We are losing a lot of dogs right now. It's just one of those sobering things,” says Patterson-Kane. “But those samples from those dogs are a legacy to those dog’s lives. And after they're gone, we're still going to be getting those samples out looking at that data.” The hope is that more researchers, not just veterinarians but also people in other fields, will be able to use the group's data.

The Dog Aging Project, meanwhile, is continuing to recruit new dogs. “The Dog Aging Project welcomes dogs of all ages, from puppies to geriatric dogs,” says Promislow, adding that the research project takes dogs from all around the country. “What better way to discover the cool things that science can do then, by doing it through this dog who you love and who's a part of the family?”