What is Rewilding? Scientists' New Roadmap For Restoring Ecosystems 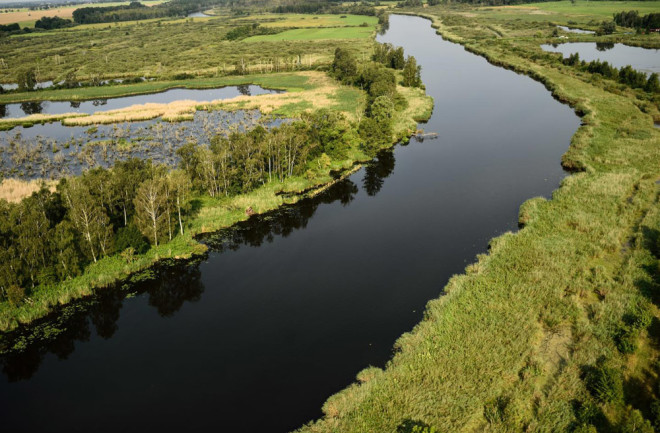 Peene river and flooded lands near Anklamer Stadtbruch, Germany. (Credit: Solvin Zankl/Rewilding Europe) The human imprint on Earth is undeniable. Everywhere you look, you can find traces of our species’ short time on our roughly 4.5 billion-year-old planet. Often, those stamps are visible, like roads cutting through a forest or a patchwork of farmland covering what was once prairie. These marks can hinder the natural biodiversity of ecosystems, suffocating plant and animal species that once had a happy niche. One way to undo some of this damage is to follow a conservation practice called rewilding, which some experts have criticized, often because of the concept’s ever-evolving nature. Now, the authors of a paper out in the journal Science have outlined what they say is a framework for rewilding that addresses those concern. It also identifies key ecosystem factors for experts to home in on.

The definition of rewilding has shifted over the years. Generally, though, it involves humans essentially backing off from an area and letting it do its thing. Chernobyl is probably the most well-known example of rewilding. Once humans abandoned the area due to the devastation of the 1986 nuclear blast and resulting radiation, the ecosystem slowly rebalanced itself. Now, even though the effects of the radiation linger, flora and fauna are thriving; the area even boasts rare and endangered species. Though the rewilding gold standard is to have as little human involvement as possible, other variations of the practice call for us guiding things a little bit. Sometimes, this means breaking down humanmade barriers, like dams, and letting an area revert back to its natural state. Other times, experts might have to give things more of a jump start, reintroducing species that once flourished in a region. And if those once-present species have gone extinct, researchers will sometimes use the next-best species, introducing it in the original’s place.

Read more: How Scientists Are Resurrecting the First Recorded Animal to Go Extinct

But there are some concerns about rewilding. One big sticking point is that the definition of rewilding has evolved from when it was first came about 20 years ago. Back then, it described efforts to reintroduce large predators and so-called keystone species into their native regions. These keystone species help regulate ecosystems’ diversity and resilience. (Think of reintroducing the gray wolf

.) But over the years, that definition has expanded to include other, sometimes more passive methods, like creating protected areas or no-hunt zones. So figuring out what someone means by rewilding can be tricky. Another concern is how hard it is to predict what will happen once humans withdraw from an area; there’s no real way to know if there will be any negative ramifications. In addition, some critics worry that experts will plan out rewilding efforts in a way that totally cuts humans out of the equation, neglecting to get support and buy-in from locals. However, the Science paper’s framework, the authors claim, address these concerns. Specifically, the international team researchers walk through three main factors they say are key in rewilding efforts: the complexity of the area’s food chain, how to handle so-called natural disturbances and how species are spread out.

Tourists stop for pictures as an elephant crosses a road. (Credit: Jakub Barzycki/shutterstock)

A Trio of Key Factors

Perhaps the most important factor of the three is the complexity of the food chain. For instance, having more large herbivores in an area means they’ll produce more dung, which will help fertilize and perpetuate plant growth to sustain other plant-eaters. Plus, more herbivores hanging around means more food for carnivorous hunters and scavengers. And having more animals roaming around in general means they’ll carry more pollen through the region to help the plants reproduce and … you get the picture. It’s all interconnected

. The more critters and plants around that do different things, the better the ecosystem will be able to keep itself in check. As for natural disturbances, the writers describe how we humans have almost a knee-jerk reaction to stamping them out. Take wildfires. Small fires are actually a good thing

for many forest ecosystems. They can boost soil nutrients and help young trees establish themselves in the aftermath, which can prevent future fires from spreading. But if those fires are too close to places where humans frequent, we’ll put them out, upping the potential for bigger, more devastating fires down the line. Plus, cleaning up the aftermath of natural disturbances can deny opportunities for species that usually capitalize on these events, like beetles and other insects that might claim a tree felled by a fire as a new home. Lastly, there’s the distribution of these creatures to consider. Animals who can move freely within their ecosystem and are better able to avoid other animals that they might have to compete with for resources. Relatedly, they usually have more options for potential mates, which increases their species’ genetic diversity. But more and more, humans are encroaching on this space, interrupting animals’ natural ranges with things like freeways and fences or altering an area’s defining features, like damming up flood zones to make way for farmland or housing plots.

The authors argue that anyone pursuing rewilding projects should make this trio of traits their focus, adding that how to address them is going to be a case-by-case issue. And not all areas may lend themselves to project leaders being able to focus on all three of those ecosystem traits. “It is not about directing all your energies toward the specific objective of creating an ideal ecosystem,” says Andrea Perino, a graduate student at the German Center for Integrative Biodiversity Research and the paper’s lead author, in a press release. “Ecosystems are dynamic and therefore, measures also have to be dynamic.” However, Perino and her colleagues do provide some general recommendations. For instance, in order to boost food-chain diversity, you’d need to first figure out which species are missing from an area. They point to paleoecological data like fossils as one source for that sort of information. The blueprint also suggests collaborating with the public and local experts to figure out points where humans might get in the way of an ecosystem’s natural flow. And those points might not just be physical obstacles like roads — the authors also recommend identifying things like potential risks to nearby human-inhabited areas from letting natural disturbances like floods or fires play out on their own. Finally, when rewilding managers finally start putting their plans in place, the scientists advise pushing to figure out just how much human monitoring the area will need and working with the public to get them on board with the efforts. The authors get at the fact that, though as little human involvement as possible is the goal, some areas may need more management than others. All of these things might seem obvious, but just having the information laid out could help experts find a workable game plan for a practice that’s been tricky to nail down. But it’s not like these methods haven’t worked elsewhere, the authors point out. Rewilding IRL One real-world example is the Leipziger Auwald forest in Germany. The forest used to naturally flood, but humans started suppressing those inundations starting in the mid-nineteenth century. As a result, the composition of the forest’s tree community shifted; flood-tolerating oak and hornbeam trees, once the dominant species, gave way to trees that fared better in drier conditions, like the sycamore and common ash. But starting in the 1990s, city managers began flooding a test area of the forest each year. After monitoring the region for several years, the group noticed that oak and hornbeam trees started reappearing in greater numbers, as did some water-loving critters, like certain species of slugs and beetles. Now, local experts are using what they observed in that pilot test to implement a rewilding project for more sections of the forest. And they’re making sure to include the local community, running outreach programs to get the public invested. Overall, especially given the fact that the United Nations declared in March

that 2021-2030 is the “UN Decade of Ecosystem Restoration,” the researchers hope their blueprint will pave the way for more rewilding wins in the future.