Yellowstone is one of the most active (and unjustly feared) volcanic calderas on Earth. What does the activity at Yellowstone look like on your average year? 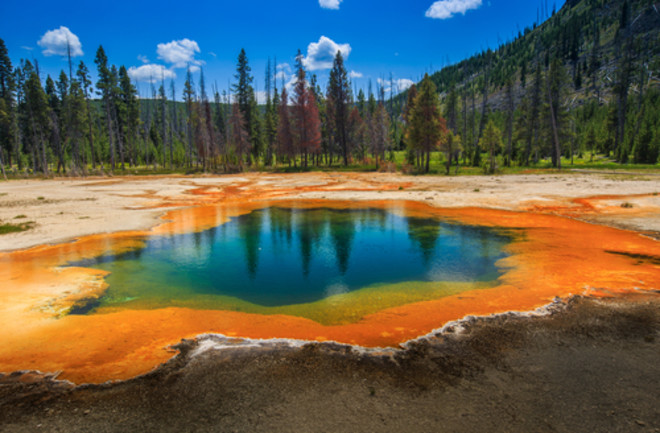 Yet, Yellowstone is not on the brink of some cataclysmic eruption. To understand why, it helps to look at what the typical year at Yellowstone is like (volcanically-speaking). When you do, you quickly see how much (and how little) is going on during any given year.

Luckily for us, the job is made easier by the annual report of the activity and research at Yellowstone put together by the US Geological Survey. The Yellowstone Volcano Observatory staff (both of them) carefully lay out all the ins and outs of earthquakes, ground motion, water chemistry, geyser activity and more. 2021 was a pretty average year at the caldera, so what’s that look like?

One of the features that volcanologists watch at many potentially active volcanoes is how the ground level rises and falls. This can give us clues to whether magma is entering or leaving the system many miles underground. However, the up and down of the ground can also be linked to groundwater and heated fluids. Overall, much of the caldera floor continued its downward trip, sinking 1-2 inches (3-5 cm) as measured by GPS stations across the area.

That being said, one spot that started to go up a tiny bit is the northern rim near Norris Geyser Basin. That area saw the surface rise about 1/2” (1 cm), the first such uplift since 2016. This isn’t troubling news as that whole area saw uplift earlier in the century that raised the ground almost 5 inches (12 cm).

Again, without context, that might seem like a lot of carbon dioxide. However, your average coal-fired power plant might emit up to 10,000 metric tonnes per day, so even a massive restless volcano like Yellowstone doesn’t add anything to the atmosphere compared to people.

At any given moment, Yellowstone emits enough geothermal energy (in the form of heat) to get Marty back and forth from 1955. This sort of energy, created by the magma many miles down, is exactly why volcanoes are so appealing as potential sources of energy to replace fossil fuels.

All this energy drives the geothermal features at Yellowstone, like the hot springs, mud pots, geysers and fumaroles (steam vents). These features aren’t permanent either. In 2018, a new geothermal area appeared near Tern Lake while another went dry.

OK, so that’s not the most exciting headline but Steamboat Geyser — the tallest active geyser on Earth — saw 20 eruptions over the year. That’s fewer than it experienced in 2020, so maybe this recent spate of activity at the geyser is waning. However, Sawmill Geyser saw its first activity in 4 and a half years.

You might look at all this action at Yellowstone and think that the Yellowstone Volcano Observatory might be nervous about it. Maybe at another volcano all the earthquakes, uplift and heat could raise alerts, but at Yellowstone, it is business as usual. The USGS never raised the alert status at Yellowstone above “green,” which is more or less background levels for a restless caldera.

At some point, Yellowstone will likely act up again. It could be in our lifetime (although this is very unlikely) or it could be tens of thousands of years from now. Even if it does erupt, it is most likely to be a hydrothermal explosion or an eruption of a lava dome or flow rather than the giant blast most people associate with Yellowstone.

In fact, it is the impacts of climate change that might be the biggest hazard at Yellowstone. The unique nature of Yellowstone means that every rumble and burp will get watched closely, but no one should be feeling much panic about the one of world’s most impressive volcanic areas.