What Color Were Feathered Dinosaurs and Prehistoric Birds? 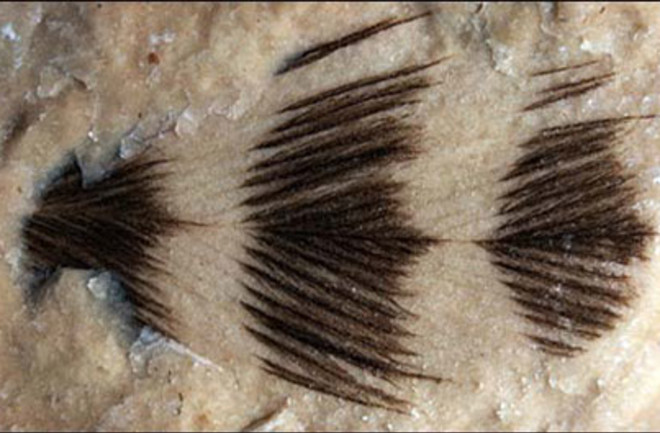 A new study of fossilized bird feathers from 100 million years ago has determined that the broad stripes visible on the feathers do indicate the color of that ancient bird's plumage. Researchers say the discovery may allow them to reconstruct the colors of other prehistoric birds and even feathered dinosaurs.

The fossil feathers had an obvious striped pattern but its origin had long been debated, according to Professor [Mike] Benton. "The banding looks so life-like that it can't be geological in origin - it has to be biological," he said. "But then how do you square that with the well-known fact that the majority of organic molecules decay in thousands of years?" [BBC News].

For the study, which was published in Biology Letters [subscription required], researchers examined the dark bands with an electron microscope and saw sausage-shaped structures that had previously been interpreted as fossilized remains of bacteria. However, researchers realized that modern bird feathers have similar structures called melanosomes

, which are tiny organelles found inside pigment cells that produce melanin pigment. Melanin is what determines our hair, eye and skin color and gives birds' feathers their spectacular range of hues [LiveScience]. The lighter areas of the ancient feathers didn't have similar structures, leading researchers to confirm that the long-dead bird had black and white stripes.

Study coauthor Derek Briggs says the next step is to

investigate the structure of fossilized feathers from an ancient bird thought to be closely related to a living bird with varied and colourful plumage. “With luck the microstructure of feathers from different parts of the fossil will vary corresponding to different original colours,” says Briggs [Nature News]. The team believes it may be able to distinguish between

brown, red, and iridescent colors, and says the technique may work on ancient fur, as well.

Any discoveries will be of interest to artists who can use the findings to create more accurate pictures of prehistoric beasts, but researchers say there's also a scientific motivator. [K]nowing the colour of dinosaur plumage could reveal something about their daily lives and ecology, [coauthor Jakob] Vinther says. "We might also be able to tell whether they have sexual dimorphisms – whether males were more spectacularly coloured than females," he says [New Scientist].

Check out spectacular pictures of feathered dinosaur fossils in the DISCOVER feature, "The Dragons of Liaoning."