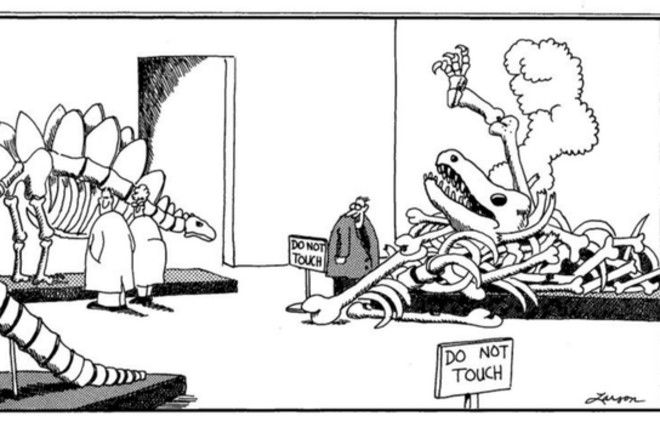 A new study about the relationships between species just knocked down our basic understanding of the dinosaur family tree. (Credit: Gary Larson/The Far Side) Ask any obsessive dino-phile above kindergarten age to explain the dinosaur family tree and it's likely the first thing you'll hear is that all dinosaur species fall into one of two groups. It's a core concept upon which our entire understanding of dinosaurs is built. But according to a new study, we got that most fundamental aspect of dinosaur evolution completely wrong. Oops. For more than a century, the dinosaur family tree was understood as having a very early split into two branches: Saurischia and Ornithischia. While science has not yet nailed down exactly when dinosaurs evolved, conventional thinking put the big saurischian-ornithischian split at least 230 million years ago, soon after the Dawn of Dinosaurs itself. The saurischians, or "lizard-hipped," then split into sauropodomorphs (mostly quadrupedal, long-necked, long-tailed herbivores) and theropods (mostly carnivorous, bitey bipeds of all shapes and sizes and degrees of bitey-ness). The ornithischians ("bird-hipped") went on to diversify into some of the whackier herbivore dinosaurs, from horned and frilled ceratopsians to bipedal duck-billed dinos. Despite being "bird-hipped," by the way, the ornithischians have nothing to do with modern birds, which evolved from a theropod lineage. The word Ornithischia comes from the structure of the pelvis. In saurischians, the pubis bone points forward; in ornithischians, it points backward, much like in modern birds, an example of convergent evolution (when unrelated species happen to evolve the same trait). (Sidenote: that's a fun fact to trot out when you want your non-dino-loving friends to reply with comments such as "I can't believe you're still into dinosaurs. At your age," and "This is why you're still single." Then again, if you have non-dino-loving friends, ditch them. You don't need that kind of negativity in your life.) In addition to birdy hips, the ornithischians are also unique for their predentary, a pointy bone at the front of the lower jaw likely used to crop vegetation for noshing.

A study published today in Nature, however, has reshuffled the dinosaur family tree in a new and rather shocking way. Comparing more than 450 traits across a range of dinosaurs and their nearest non-dino relatives, researchers kicked the saurischian-ornithischian split to the curb. Instead, they propose dividing dinosaurs into a revised, more exclusive Saurischia club and Ornithoscelida. According to the paradigm-shifting (shattering?) new study, Ornithoscelida includes ornithischians and theropods, the latter previously part of Saurischia. For dinosaur enthusiasts this is an epic shift in thinking, so if your head is exploding right now, take a deep breath and take some comfort: the term "Ornithoscelida" at least is nothing new.

The official Dead Things mascot, a headless theropod I photographed in 2010 in a disused mini-golf course in Auckland, New Zealand, kind of sums up how I feel right now about this new study. The great early evolution champion and dino-curious biologist Thomas Henry Huxley proposed Ornithoscelida in 1870 as an umbrella for a handful of dinosaurs with notably bird-like hind limbs. The new research puts some very un-bird-like dinosaurs, such as Triceratops, into Ornithoscelida. But it does so based on identifying 21 strongly supported traits called synapomorphies: these are characteristics that can be traced from an ancestor only to its descendents or, in other words, characteristics unique to that particular lineage.

Where Does That Leave The Rest?

The sauropodomorphs, along with theropods, were previously grouped in Saurischia. Now, they're still there, but they're on their own — though the new research points to Herrerasauridae as a "sister clade" to the sauropodomorphs. This is a tougher argument than some of the others advanced in today's paper, because Herrerasauridae are small, bipedal, full-on carnivores with grasping hands; sauropodomorphs, remember, are herbivorous and mostly quadrupedal (though bipedalism is seen in the earliest members of the lineage).

The dinosaur family tree, before and after new research results published today in Nature. The early division between Ornithischia and Saurischia has been abandoned, upsetting one of the longest-held notions about how species can be classified. (Credit Nature)

One thing that hasn't changed in the new research: Dinosaurs in general are placed in the archosaur lineage, which today includes crocodilians and birds. The researchers included dinosauromorphs, archosaurs closely related to dinosaurs but not quite in the fold, in their study. Crunching all that data, says the team, places the emergence of dinosaurs earlier than previously thought. The rise of Dinosauria, according to the new paper, occurred about 247 million years ago. While the new date doesn't exactly contradict the conventional chronology of dinosaurs evolving "before 230 million years ago," it does push the event further back in time.

...Oh, and Another Thing

Not content to drop just one bomb into the field, the researchers also suggest that their data points to the Northern Hemisphere as the cradle of dinosaur evolution. Although a casual observer familiar with famous dinos from the United States, Canada and China might think that makes sense, the assertion is another shake-up because the earliest and most primitive dinosaurs found so far hail from South America. As noted in a commentary that accompanied today's study, the new research is indeed a "revolutionary proposal" and "provocative reassessment," but also a notion that will need a lot of additional data-crunching before we rewrite the paleontology textbooks.