Two earthquakes struck Nevada and Utah, reminding us that the Western U.S. continues to stretch. 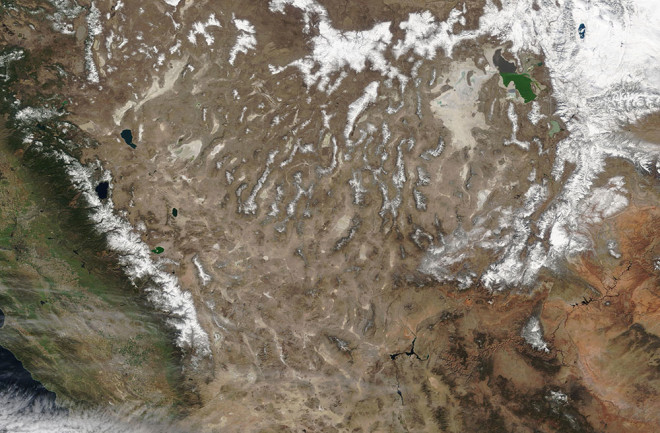 The Basin and Range Province of western North America, as seen by Terra’s MODIS imager on Feb. 27, 2020. (Credit: NASA.)

During mid-March, the Western U.S. was shaken by two earthquakes in what might seem like unexpected places. The first was an M5.7 earthquake just outside of Salt Lake City (followed by an M4.5 aftershock) and then an M4.5 temblor hit outside of Reno and Carson City, both in Nevada. These earthquakes were felt by many people around these cities, but luckily resulted in no deaths or injuries. Some of the older structures in Salt Lake City were damaged by the shaking. So why was Earth shaking in the middle of the Western U.S.?

This whole region is known as the Basin and Range. Anyone who has driven across states like Nevada and Utah might be able to imagine why. The landscape alternates from west to east from tall mountain ranges to wide, flat valleys. This shows up on topographic maps as the "marching caterpillars" of the Great Basin.

This succession of mountains and valleys is caused by Earth's crust stretching and breaking. As it does, parts of it move downward, making valleys that fill with sediment. In doing so, they leave mountains on each side. This pattern is also known as "horst and graben" after the German words for valleys and ranges. Some of these valleys represent miles of dropping of the surface, with faults running on each side of the valley, including the lowest spot in the continent, Badwater Basin in Death Valley.

The faults, which are formed by the extension of the crust, are called "normal faults." As North America continues to stretch across the Basin and Range, these faults can generate earthquakes as the valleys continue to drop. Both of the earthquakes that happened in Nevada and Utah recently were on one of the normal faults that bounded a valley.

If you can imagine, North America may have doubled in width across the Basin and Range over the past 17 million years. This stretching has also made the crust under Nevada and Utah thinner than other parts of North America. This means we do get occasional volcanoes in these states as well, caused by basalt rising up along these faults, including places like the Southwestern Nevada Volcanic Field and Marysvale Volcanic Field in Utah.

Why exactly the Western U.S. is stretching is complicated and controversial. The mantle underneath that part of North America appears to be especially warm, causing the rising and stretching of the continent. However, the Cascade Range, the Sierra Nevada, the Yellowstone hotspot track, the San Andreas Fault System and the Columbia River Basalt Province may have all played a role in why the mantle is as hot as it is.

These days, the Basin and Range is continuing to stretch at rates of around a quarter of an inch (a few millimeters) per year. That might not seem like much, but add that over thousands to millions of years, and that’s enough to cause faults to move.

That movement gives us the earthquakes like we just saw in Salt Lake City. The shaking was felt widely across Utah. The earthquake there happened on the Wasatch Fault Zone that stretches all through the Basin and Range. Historically, there have been almost a dozen earthquakes as big as the March 18 event over the past 120 years. Nevada has also felt dozens of large earthquakes over the past few centuries, many on its western border with California, some of them as large as M7. Earthquakes like these will continue to happen across the Basin and Range as North America continues to stretch.