We're Still Learning About What Happened During the 1980 Eruption of Mount St. Helens

It might be 41 years since the climatic eruption of Mount St. Helens in Washington, but we're still piecing together what transpired on May 18, 1980. 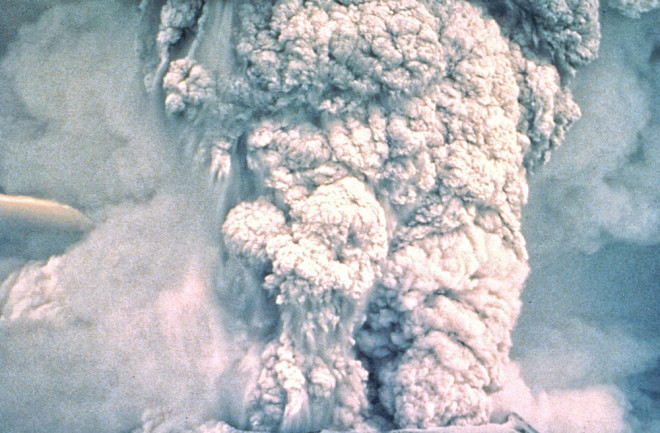 For most volcanologists, May 18, 1980 is one of the most important dates in the last century. That morning, Mount St. Helens unleashed the most powerful eruption that the lower 48 states have ever experienced. This blast and the subsequent eruptions that lasted well into the 1980s inspired the growth of modern volcanology in the United States and beyond.

So, after 41 years, you'd think we might know everything there is to know about that fateful day in May 1980. Well, as with all science, you never know everything there is to know. Even after four decades, the sequence of events during the eruption are still being unravelled, all to help us better understand how these highly destructions eruptions work.

Just this week, a new study in the Journal of Volcanology and Geothermal Research presented a revised chronology for the events that happened on May 18, 1980. This work, by C. William Criswell, uses evidence from pumice erupted across that day to reveal how the sources of magma and the conduit that the magma followed to the surface may have changed over the course of the eruption.

There are a number of characteristics found in pumice that can help us understand what is happening during an eruption. First off is the composition of the pumice. In a very real way, pumice, which is mostly volcanic glass, is a snapshot of the magma that is violently exploding out of the volcano. So, as the composition of the pumice changes, we know the magma that is erupting is changing. We can also use it to see if more than one type of magma might be erupting at the same time!

We can also look at the shape and number of vesicles in the pumice. Vesicles are the air holes found throughout pumice and they are the reason that pumice can float on water. All that air trapped in those pockets lowers the density of the pumice so it can float -- sometimes the air is over 60% of the piece of pumice. The shape and number of the vesicles is going to tell us about the nature of the gases coming out of solution in the magma. The transition of these gases, like water, carbon dioxide and sulfur dioxide, from being dissolved in the magma to becoming bubbles is what drives the explosivity of the eruption.

A scanning electron microscope image of the white pumice from Mount St. Helens' May 18, 1980 eruption. The elongate shapes are air bubbles known as vesicles. Credit: Journal of Volcanology and Geothermal Research.

Using evidence from the white and grey pumice erupted on May 18, 1980 as well as the photography and observations of the day, Criswell has modeled how the rates of eruption and the size of the eruption conduit varied throughout the day. Turns out that as the day progressed and the style of eruption changed from a tall eruption column to numerous pyroclastic flows, the eruption rate varied by >10x while the eruption conduit grew by 65 feet (20 meters) and then shrunk by 32 feet (10 meters).

Not only that, the two pumices suggest that multiple batches of magma with different histories were present under the volcano in the days to weeks before May 18. However, it was the white pumice that was most ready to create the towering Plinian ash column when the volcano erupted that morning, while the grey pumice was the fuel of the lateral blast (sideways) that happened when the volcano collapsed.

The sequence of the lateral blast at Mount St. Helens on May 18, 1980. Credit: USGS, Gary Rosenquist.

The "How fast" and "how much" of the eruption

When the eruption was going full throttle, the volcano was spitting out 136,000,000 pounds of volcanic debris per second! That's a little less than half a modern aircraft carrier of stuff per second. The magma was rising up from at least half a mile (~kilometer) below the volcano at rates up to 10.8 ft/s (3.3 m/s). How fast is that? Well, it is molten rock moving up to the surface, likely in the form of a foam (magma and bubbles), at 7 miles per hour. For stuff moving through solid rock, that is fast!

The long and short of this new look at the May 18, 1980 eruption of Mount St. Helens is that the dynamics of the blast and the shape of the conduit bringing magma to the surface changed over the course of the day. The more the volcano erupted, the more all the batches of magma stored under the volcano became connecting, helping feed the blast for 9-10 hours. So, unlike the analogy we use that an explosive eruption is like "popping a cork" on magma ready to erupt, this would mean that after the cork is gone, all that erupting magma is changing the shape of the bottle's neck to maximize what comes out.

So much scientific research is like this: as we get more data, we can modify, improve and illuminate our models. This doesn't mean the previous models were wrong -- they were based on the best evidence at the time the model was developed. Even 40 years later, we're still polishing our model of Mount St. Helens.