Even dinosaurs may have liked some company. 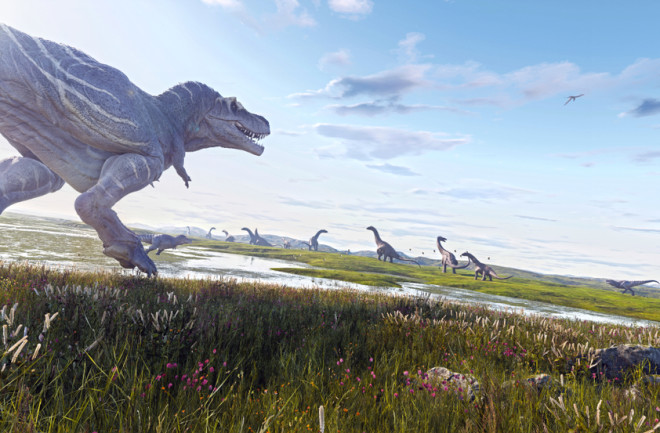 In this artistic rendering, a pack of Tyrannosaurus Rex chases down a herd of Alamosaurus in the wetlands of Hell Creek. (Credit: Herschel Hoffmeyer/Shutterstock)

From the time of their discovery through the 1970s, dinosaurs were often depicted as loners. They led relatively solitary lives and didn’t care much for their offspring. “Lay ’em and leave ’em” was their parenting style. But by the end of the 20th century, a very different image of dinosaurs had emerged.

Trackways of sauropods and hadrosaurs seemed to indicate that these dinosaurs moved together at least some of the time. An immense bone bed of the horned dinosaur Centrosaurus only made sense in the context of social behavior. Nesting grounds for dinosaurs such as Maiasaura held evidence of parental care. And deposits of multiple carnivores such as Allosaurus and Albertosaurus raised the question of whether some predators were pack hunters.

Some bits of evidence have stood up better than others. Mass assemblages of large carnivores, for example, are controversial and have sometimes been recast. A bone bed of over 48 Allosaurus in eastern Utah isn’t evidence of pack hunting, but of repeated drought and flooding that killed these animals and buried them in the same place. But nesting grounds and track sites have yielded better evidence of behavior — not just for the herbivores, but for some carnivores, too. Tracks left by raptors and tyrannosaurs indicate that these toothy dinosaurs flocked together at least some of the time, and more evidence is turned up every year.