Watch This: Brain Activity Illuminated in a Zebrafish 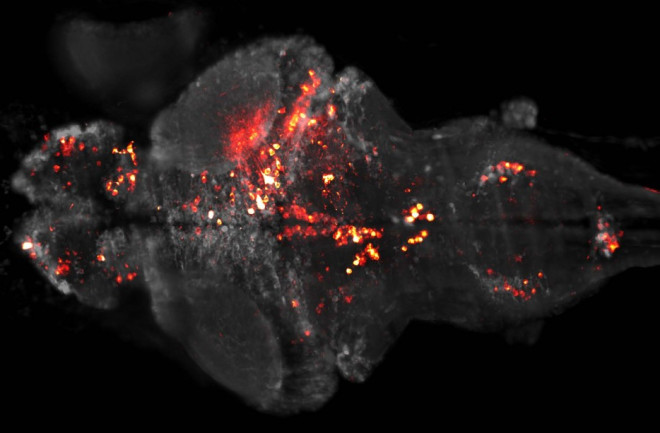 The possibility of someday recording all the neurons firing in a living creature's central nervous system has inspired generations of neuroscientists. Now a group of researchers at the Howard Hughes Medical Institute has finally achieved the feat.

The scientists studied live zebrafish larvae that had been genetically encoded with a calcium indicator called GCaMP5G. They suspended the larva in a gel and then beamed it with lasers. Just before a neuron fires, its action potential is expressed via a spike in calcium ions, so when one of the genetically modified larva's neurons reached its action potential, it glowed. This showed the researchers the firing of the neurons without them having to attach a bunch of electrodes to the fish.

Over the course of an hour the researchers used laser beams to scan the larva every 1.3 seconds, exciting the retina of the zebrafish with each scan. This microscopy method allowed the researchers to record up to 80 percent of the fish's 100,000 neurons at single-cell resolution.

This is the first time scientists have recorded such a high percentage of an organism's brain activity at such a high resolution.

By seeing how the central nervous system works in its entirety in real-time, the scientists could see complex neuronal connections. For example, the researchers found that the activation of certain neurons in the spinal cord overlapped with the activation of neurons known to be associated with swimming, suggesting that the hindbrain-spinal network is most likely involved in locomotion.

This new method of full central nervous system visualization allowed the scientists to see the bigger picture of brain function, which they published today in Nature Methods.

Instead of seeing a snapshot of brain activity in one lobe and trying to correlate it with a particular function, this scanning method shows how the coordinated firing of neurons in different parts of the brain and spinal cord can cause a particular function. Although the zebrafish larva's brain is relatively small and simple, the study demonstrates a new method that could be adapted to analyze more complex central nervous systems in the future.