Many archaeologists have hunted for evidence to support or refute the ancient Biblical stories about Israel. But the First Temple in Jerusalem — and its builder, King Solomon — remain shrouded in mystery. 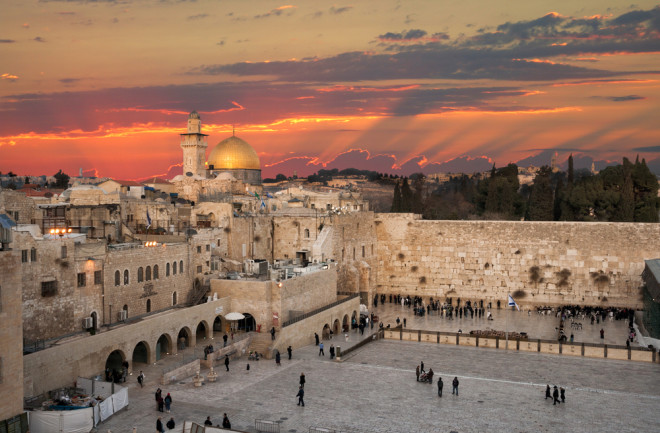 King Solomon’s temple was the first temple built by the Israelites to honor their god, the Bible tells us. It’s also where the Jewish people are said to have kept the mythical Ark of the Covenant holding the 10 Commandments. But was the temple of Solomon actually a real place?

Solomon was the son of King David, the Biblical figure who killed Goliath. Tradition says that when David died, Solomon inherited his father’s kingdom and extraordinary wealth. Within just four years, Solomon had marshaled those resources and built the First Temple.

Everything historians know about the so-called “First Temple” comes from the Bible. Thankfully, it offers a surprisingly detailed description of what King Solomon’s temple looked like — including its supposed exact dimensions. According to the Bible, the temple was built from masterfully quarried stone blocks, with a roof and interior lined with lavish wood planks. Solomon used pure gold to overlay the temple’s holy inner sanctum, where he also placed a pair of 15-foot-tall gold cherubims — sphinxes — to guard the Ark of the Covenant.

Yet not a single stone from this structure has ever been found, despite over a century of searching for connections between Biblical text and dig site evidence. Archaeologists simply keep coming up empty.

That’s surprising considering the scale of Solomon’s alleged empire. The First Temple was completed in the year 957 B.C., taking the Bible at its word. In the chronology of ancient history, that’s several centuries after the legendary Trojan War and two centuries before the mythical founding of Rome. And according to the Bible, the First Temple stood for roughly 400 years before Babylonian king Nebuchadnezzar destroyed it and sent the Jews into exile. The Second Temple wouldn’t be completed until the sixth century, when the Jews were allowed to return.

Despite the destruction, it’s easy to see why archaeologists might expect to find remnants from such a large and long-standing structure.

The Bible describes Solomon as a wise ruler and great builder living at the height of the kingdom of Israel. It also says he had a lavish palace, a large army and an empire that included all of Israel. Yet there’s no archaeological evidence that Solomon the man ever existed at all. Despite living at a time where scribes were already likely writing the Bible, no inscriptions from across the greater region bear his name. That leaves archaeologists unclear whether the third king of Israel was real, or was more like other legendary rulers of history, from King Arthur in Great Britain to Romulus, the supposed founder of Rome.

One thing that would help is if archaeologists found some contemporary evidence for the existence of Solomon from outside the Bible. Such a find might help prop up the entirety of the Biblical story. One potential sign of hope appeared in 1993. Researchers were digging at a site called Tel Dan in northern Israel, when archaeologist Gila Cook of Hebrew Union College spotted a large stone covered with Aramaic writing — an archaic relative of Hebrew. In the text on the stone, now known as the Tel Dan stele, an Aramean king records a conflict with the kings of Israel and proclaims victory over the “House of David.” The Tel Dan stele likely dates from more than a century after King Solomon’s death; however, it provides some evidence that David may have been a real person. Archaeologists are still digging at the site today.

And over the past decade, a few other tantalizing potential clues have started to emerge.

In 2010, a team of archaeologists led by Eilat Mazar from the Hebrew University of Jerusalem said they’d discovered a monumentally large segment of wall while digging in the oldest part of Jerusalem in search of King David’s palace. The finds at the site, called Ophel, included a roughly 210-foot-long wall section, complete with a gatehouse, corner tower and a royal structure. The features were so big that the researchers became convinced it was just one part of a truly massive building. Dating the site proved controversial, but some radiocarbon dates put the site smack in the middle of Solomon’s reign. "This is the first time that a structure from that time has been found that may correlate with written descriptions of Solomon's building in Jerusalem," Mazar said at the time.

Other researchers aren’t so sure.

Tel Megiddo, now a World Heritage Site, was an important city in the ancient Kingdom of Israel. Scientists have done extensive excavations in the area searching for signs of King Solomon's rule. So far, they've only found evidence for later eras. (Credit: Avram Graicer)

Raiding the Temple of Solomon

There’s a long-standing history of archaeologists searching for — and even claiming to have discovered — signs of Israel’s might during the time of King Solomon. At one point nearly a century ago, excavators said they’d discovered Solomon’s stables at a site called Megiddo, the focus of the Biblical story of Armageddon. The Bible says that Megiddo and two other cities were used to house the horses and horsemen for his legendary chariots. However, digs in more recent years have failed to find any evidence of horse bones or other obvious signs of a cavalry. In fact, there’s no signs of Solomon’s Israel at all so far.

Other researchers have looked for Solomon’s fabled mines. These would have been vital to secure the precious minerals and wealth needed to construct the First Temple. Many have come up empty handed. But in research published in 2017, archaeologists said they’ve found evidence of extensive ancient mining of copper in a nearby part of Jordan. The time period seems to match up, and if Israel held control of the area back then, it might have been a key source of minerals and wealth.

Beyond archaeological finds, Biblical historians have found other reasons to doubt the traditional stories of Solomon.

For starters, the text contains a number of fantastical claims. Over the course of his life, the Bible says Solomon married some 700 wives and 300 concubines, a number that stretches the imagination. One of those wives was also said to be “the Pharaoh's Daughter.” However, Egyptian records don’t preserve such a matrimony. And some scholars say the pharaohs were notoriously unwilling to marry out their daughters for fear of losing power.

But perhaps the most doubt-inducing claim is that Solomon had a staggering 1,400 chariots, suggesting an army big enough to rival other great civilizations. Setting aside the lack of physical evidence for Solomon’s stables, a war victory inscription and the Bible itself claim that the Egyptian Pharaoh Shishak managed to conquer Israel, sack Jerusalem and steal all the treasures from the First Temple just five years after Solomon died. The speed of the campaign suggests an easy victory, which seems unlikely if the ancient Israeli empire truly held such military might at the time.

The outsized claims have prompted some Biblical scholars to suggest Solomon’s strength was concocted by historians many centuries later as a way to put their civilization on par with other great kingdoms.

The Temple Mount Sifting Project has used hundreds of thousands of volunteers over many years to sort through rubble recovered from a construction project on the Temple Mount. (Credit: Wikimedia Commons)

Ultimately, the biggest hindrance to finding King Solomon’s temple also cuts to the core of why it's so interesting to us in the first place. The kingdom of Israel would eventually reshape the world’s culture and religions. And the Temple Mount in old Jerusalem, home to both the First Temple and Second Temple, is perhaps the holiest site in the so-called Holy Land. For thousands of years, Jewish, Muslim and Christian religious leaders built new structures in the area, burying the old holy sites with new ones.

Christians believe that Jesus visited the Temple Mount, then home to the Second Temple, and criticized the religious figures of the day before supposedly predicting the site would be destroyed. And in the Islamic faith, the Temple Mount is where the Prophet Muhammad ascended into heaven. It’s also the site of the still-standing Dome of the Rock, one of the oldest Islamic buildings in the world, built over the Second Temple centuries after it was destroyed by the Romans in 70 A.D.

If any remnants of King Solomon’s temple do still exist, they’re buried beneath many layers of politically charged history. All the activity and intertwined religious history make digging here impossible.

Strangely, this very conundrum has also offered up the only extensive archaeological exploration ever allowed. In the late 1990s, Waqf, the Islamic trust in charge of overseeing Muslim holy sites on the Temple Mount, started construction of a new, large mosque at a site called Solomon’s Stables. (The site actually likely dates from centuries after Solomon’s death and was used to store horses during the crusades.) Instead of getting the necessary permits and carrying out a required archaeological excavation, Waqf simply used heavy equipment to bulldoze ancient structures and remove vast amounts of dirt. In years before the event, gun battles had even broken out after Palestinians said digs by Jewish authorities were damaging holy Muslim sites. Whatever sparked the brazen move, dozens of truckloads of rich archaeological material went to a dump, where it was mixed in with modern trash. Archaeologists, thanks to a public outcry, managed to get several hundred truckloads of material taken to a national park to be examined. In the years since, the Temple Mount Sifting Project has relied on hundreds of thousands of volunteers, including many tourists, to pore through the dirt.

The Temple Mount Sifting Project managed to uncover some of the first real artifacts known to date to the time of the First Temple. Their discoveries include a Hebrew seal with lesser-known names found in the Bible, as well as animal bones and pottery. Much of the dirt still remains unsifted, but their evidence so far also hints at a more obvious finding. Whatever the truth of Solomon’s Temple, it’s likely buried beneath the Temple Mount, and it may never see the light of day.