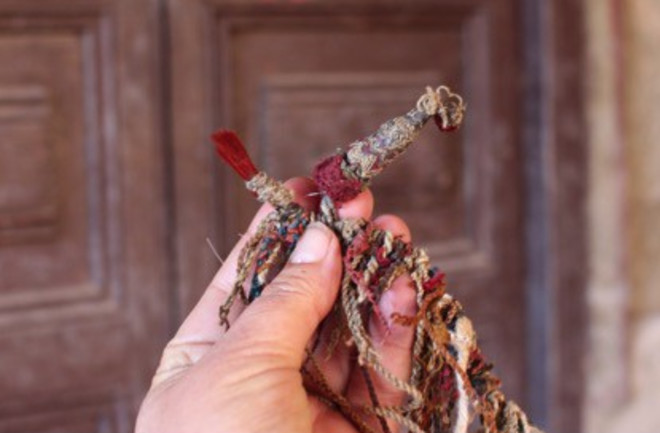 Village authorities insisted on handling the khipus without gloves to feel the fibre differences. (Credit: William Hyland) Two vibrant bundles of string, over 10,000 feet high in the Peruvian Andes, may hold clues for deciphering the ancient code of the Inca civilization. Kept as heirlooms by the community of San Juan de Collata, the strings are khipus, devices of twisted and tied cords once used by indigenous Andeans for record keeping. Anthropologists have long debated whether khipus were simply memory aids — akin to rosary beads — or a three-dimensional writing system. The latter seems more possible, and decipherment more feasible, according to new research on the Collata khipus, published Wednesday in Current Anthropology. In the study, University of St. Andrews anthropologist Sabine Hyland analyzed string color, fiber and twist direction to identify 95 unique signs — enough to constitute a writing system — and proposed a phonetic decipherment of the khipus’ final strings, thought to represent family lineage names. “If that’s the case, that would be groundbreaking,” says Galen Brokaw, a scholar of Latin American Studies at Montana State University, who was not involved in the study. “The challenge is to find more sources, more khipu ... more extensive evidence” to support this hypothesis.

Khipus are best known by archaeologists as record keeping devices of the Inca Empire, which encompassed over 18 million people and 3,000 miles of South America from the early 1400s until the Spanish conquest in 1532.

Hyland studying a war indicator khipu. (Credit: William Hyland) The strings usually consist of a top cord, to which pendants are attached; the pendants may have groupings of knots and subsidiary pendants. Complex khipus, made under the Imperial Inca, contained as many as 1,500 pendants branched over six levels of subsidiaries. Simpler ones comprised of a few strings and knots, were used by herders to count their animals. Khipus have been “one of these mysteries that have really resisted interpretation over the years,” says Richard Burger, an expert in Andean archaeology at Yale University. Most 20^th century scholars believed that khipus were strictly memory aids that used knots to record numerical data: censuses, tributes, inventories. They thought, “there was nothing there you had to decipher,” says Hyland. But other scholars disagreed, contending that “it’s simply impossible to have a civilization like the Incas that didn’t have some form of what we would call writing.” And according to colonial-era Spaniards — who never learned to read khipus, but witnessed indigenous people using them — the strings could also encode rituals, letters, and narrative histories. Therefore, researchers have speculated that, in addition to knots representing numbers, features like color, fiber, cord groupings, and twist direction signified additional information. “It remained really hard to move beyond sort of speculation about what those patterns might mean,” says Burger

Most of the 900-some surviving khipus are ancient artifacts, curated in museums and other collections. However, in some remote mountain villages, khipus were made and used into the 20^th century. Although no one today can directly read them, communities preserve these khipu as cultural patrimony. Such is the case with the Collata khipus, which, in 2015, village authorities invited Hyland to study — the first outsider permitted to view them. The two khipus comprise 487 pendants cords, dyed 14 colors and made from six animal fibers, including alpaca, llama and vizcacha—a rabbit-looking rodent. Combinations of color, fiber and twist direction create 95 distinct symbols, a number that’s within the range of logosyllabic writing systems, or those with signs for full words and phonetic sounds.

Colored pendants on Collata Khipu A. (Credit: Sabine Hyland) The Collata strings, therefore, at least demonstrate the potential for khipus to symbolize speech and record as much information as written texts. “If they’re phonetic that raises a kind of whole new realm of possibility,” says Hyland. Recognizing this phonetic potential, Hyland applied principles of decipherment, developed for other ancient scripts, to the final strings of the Collata khipus. Based on community interviews and colonial-era manuscripts stored with the khipu, Hyland believes the strings are narrative letters sent between Collata and the nearby village of Casta about a rebellion against the Spanish in the late 1700s. As letters, the final strings likely represent the senders’ names—one of the khipus is said to have been made by the Alluka family lineage of Collata. Correlating the sounds in this name to features of the final cords, Hyland developed a tentative code. For instance, she hypothesized that a blue llama cord, twisted clockwise, symbolized the “ka” sound. This particular sound and color association makes sense, as ankas was the regional dialect word for “blue.” She then used this code on the other khipu, translating the final strings as Yakapar: one of the only two lineages in Casta.

Hyland’s phonetic code may work for the final strings of the Collata khipu. However, more research is needed to see if it applies to all the strings on these devices, or to khipus from ancient times. “If there’s a logosyllabic convention … to what extent is that used even on a particular khipu?” says Brokaw. Phonetic symbols may have been limited to proper names or used more broadly. “The khipu was a very heterogeneous device,” he adds. The symbolic conventions of khipus likely changed across time, space and contexts. Narrative letters probably recorded information differently than accounting khipus, or those used by shepherds. And given that the Collata khipus are from the 1700s, alphabetic writing may have influenced their makers. The logosyllabic features could be “the result of contact with Western writing systems, rather than being a continuity with the original Inca khipus,” says Burger. “But I think she makes a reasonable argument to the contrary.” Hyland maintains that the Collata khipus may preserve coding practices from ancient times. They are structurally very similar to Inca-era khipus made from animal fibers and match colonial chroniclers’ descriptions of the devices. Moreover, the Collata khipus rely on three-dimensional symbolism, distinct from European-style writing. “The phoneticism of the Collata khipus is not merely the result of contact with the European alphabet,” she stated in an email to Discover.