For centuries, farmers have been genetically modifying their plants without even knowing it. That's the message from German scientists who found that grafting, a common technique used to fuse parts of two plants together, causes the two halves to swap genes with each other.

Grafting can involve fusing the stem of one plant (the scion) to the roots of another (the stock), or a dormant bud to another stem. There are many reasons for this - sometimes it's the most cost-effective way of cultivating the scion, sometimes the stock has properties that the scion lacks including hardiness or sturdiness. The vessels of the two halves eventually merge but people have long believed that they keep their genetic material to themselves. It turns out they were wrong.

Sandra Stegemann and Ralph Bock from the Max-Planck Institute tested the theory by grafting two strains of genetically engineered tobacco plant. A Samsun NN strain had its main genome loaded with a gene that produced a glowing yellow protein, and another that made the plant resistant to the antibiotic kanamycin. The second Petit Havana strain was engineered to produce a glowing green protein, and be resistant to spectinomycin, another antibiotic. These genes were shoved into the genome of its chloroplast, the small structures that allow plant cells to photosynthesise and that contain their own separate genetic material.

Once the plants had merged, Stegemann and Bock found that the point of fusion was rife with cells that produced both glowing proteins and shrugged off both antibiotics. They cut slices from the plant and grew them in liquid that contained both kanamycin and spectinomycin for a month. While chunks that were taken from other parts of the plant fared poorly under these conditions, many of those from the graft site thrived, even producing fresh shoots.

You might think that these shoots survived because different cells were resisting the effects of the two antibiotics. But a glance under the microscope said otherwise. All the cells of the regenerating plants gave off a green fluorescence from their chloroplasts and a yellow one from their nucleus. This meant that every cell contained both proteins. 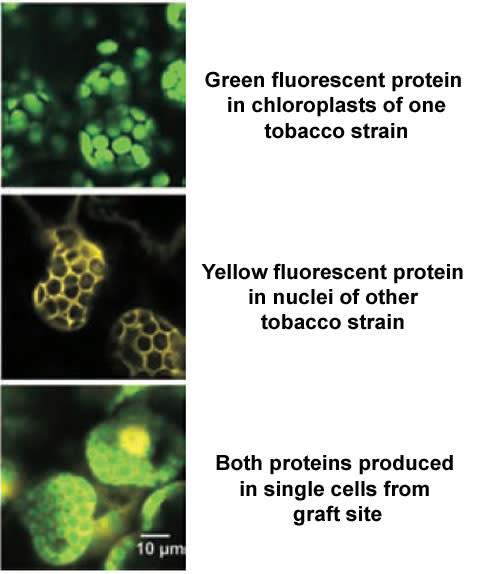 Stegemann and Bock even showed that the cells at the graft site were activating all of the added genes. They used a technique called Northern blotting, which detects whether genes are being switched on by recognising the RNA molecules that are produced during this process. First, all the RNA from the cells is extracted and separated according to their size. They are mixed with mildly radioactive probes designed to recognise specific RNA sequences - these give away the position (and size) of any RNA molecules of interest.

Using these probes, the duo confirmed that all four of the inserted genes were being switched on in the fused plants. The new shoots can be bred with other plants to produce viable offspring, sowing that the swapped genes can be passed on through the generations.

These results show that contrary to popular belief, grafted plants aren't genetically distinct. As their tissues combine, so too do they swap genes with one another. Judging by the number of shoots that Stegemann and Bock produced, it's a common event, but also a local one. The plants don't exchange any genes over long distances.

The number of chromosomes in these cells showed that the cells from the two plants hadn't merged. Instead, Stegemann and Bock found that they were shuffling chloroplast DNA from one cell to another. Their chloroplasts of Petit Havana tobacco contain a distinct DNA sequence that's unique to this strain, and that lies some distance away from the place where the extra genes were inserted.

This marker sequence turned up in all the cells where genes had been swapped, which means that the plants were trading in very large chunks of DNA, or even their entire chloroplast genomes. The genes from the main nuclear genome, however, showed no signs of movement.

Stegemann and Bock say that their discovery "further blurs the boundary between natural gene transfer and genetic engineering". It also suggests that the trading of genes is more common than we thought, and occurs via routes we're only starting to uncover. After all, plants can graft to each other without human help. The roots and branches of trees will sometimes merge when they touch one another. It's a process called inosculation and it allows groups of trees to share nutrients and water through a combined root system. But trees of different species can also fuse together and in doing so, they may create a tunnel through which genes can pass.