Genetically modified crops have received a frosty welcome in the UK, and more widely in Europe. Those opposed to such crops worry (among other things) that they could affect the flora around them by outcompeting them or by spreading their altered genes in a round of genetic pass-the-parcel. Now, a new study shows that genetically-modified crops does affect surrounding plants - but in a positive way.

Kong-Ming Wu from the Chinese Academy of Agricultural Sciences found that genetically modified cotton designed to kill an insect pest can also protect other species plants from its jaws. In doing so, this "Bt cotton" could help to reduce the need and demand for other sprayed insecticides.

Bt cotton has been loaded with insect-killing genes taken from a bacterium called Bacillus thuringiensis (hence "Bt"). This species lives in soil and the surface of plants, and it produces crystals of proteins that are toxic to hungry insects. If they are swallowed, they stick to molecules in the pest's gut, breaking down its lining and allowing both B.thuringiensis spores and colonies of normal gut bacteria to invade. It's this wanton spread of bacteria that kills the animal.

For decades, the protein crystals have been sprayed over crops as a pesticide. The chemicals degrade easily and pose no risk of contaminating groundwater. They are also highly specific - toxins from a specific strain of Bt will usually only affect a few species of insect, so insecticides can be very finely tailored to control certain pests while minimising collateral damage to other insects, and indeed other animals.

In Bt cotton, these genes have been implanted so that the plant itself produces the relevant insecticides without the bacteria. By relocating these defences to the plant's own genome, scientists can greatly reduce the need for spraying pesticides, and the power of this 'transgenic' technology has made Bt cotton a favourite of farmers from developing countries. Today, it is one of the most common of genetically modified crops and a third of the world's cotton-growing land is taken up by these Bt varieties.

In China, the transgenic cotton has proved to be an important defence against a type of moth called the cotton bollworm (Helicoverpa armigera). The larvae of this destructive pest has wide-ranging tastes and it will eat cotton as well as wheat, corn, peanuts, soybeans and vegetables. The bollworm launches at least four waves of attacks on Chinese crops ever year, it migrates over long distances and its outbreaks can span several provinces.

Wu and colleagues have been monitoring these outbreaks since 1992 in six different Northern Chinese provinces. Together, the team investigates over 38 million hectares of farmland cultivated by 10 million or so farmers. At first, the populations of the bollworm found on local plants was very high, but all that changed in 1997, when Bt cotton was first approved for commercial use.

In the years since then, Wu found that both the density of H.armigera on cotton plants and the density of its larvae on other host crops had fallen. Wu also looked at rainfall and temperatures over the 15-year span and found that neither of these could explain the falling bollworm census. Only the rising use of Bt cotton did that and it extended an umbrella of protection over all the local plants. 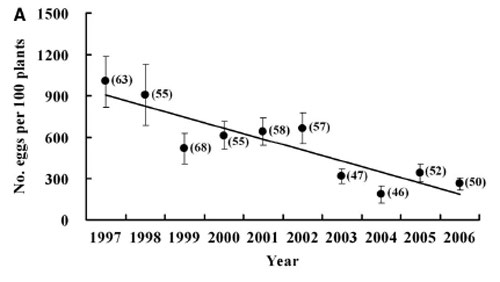 Wu thinks that cotton serves as the bollworm's main staging ground, the site where the first generation of bollworms to invade an area lay their eggs. But Bt cotton kills any larvae that hatch from this first wave of eggs and acts as a botanical dead-end for the moth. The entire crop becomes a trap.

So far, so good, but what about the chances that the insects will simply evolve a resistance to the insecticides? That's certainly possible if farmers continuously plant the same variety of cotton, carrying the same Bt toxins. In the US, the solution (which farmers must adopt by law) is to plant Bt cotton alongside normal varieties that lack any sort of genetic modifications. These normal plants act as refuges for any invading pests and keep them contained while relaxing any evolutionary pressures to develop resistance.

The situation in China is a bit more difficult because the farming population is far greater, and the prospect of educating them all about this "refuge management" technique is too daunting. Thankfully, the farmers have developed an equivalent method almost by accident. They plant a range of different crops alongside cotton including soybean, corn and peanuts. While the Bt cotton provides some shielding from bollworms, these other plants are not individually defended and they act as a refuge for the moth.

It's worth noting that Bacillus thuringiensis, which has donated its genes to Bt-cotton, is one of the few insectides whose use is allowed within the definitions of organic farming. The fact that the bacterium is found "naturally" in the soil apparently elevates it to a high enough status that its proteins can be liberally sprayed over organic crops. The genetically modified cotton, of course, uses exactly the same proteins to ward off the mandibles of insects; the only difference is that the capacity to make these proteins has been relocated.

Wu claims that despite its benefits, Bt cotton must be considered as just part of the solution for controlling China's agricultural pests. In some parts of the country, plants are being attacked by sap-sucking bugs because the introduction of Bt cotton has meant that farmers are spraying fewer insecticides with wider ranges of targets.