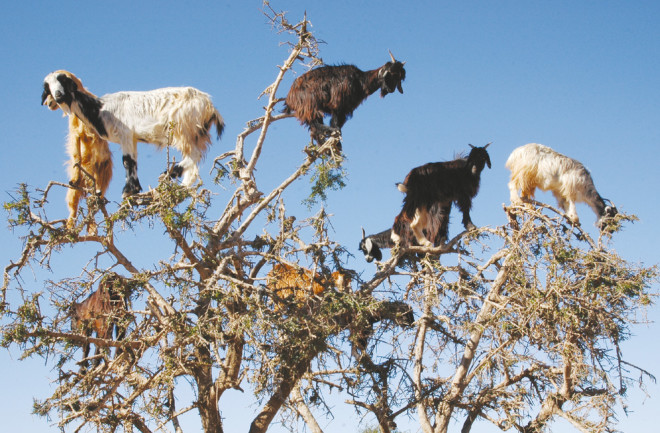 Goats grazing on an argan tree in southwestern Morocco. In the fruiting season, many clean argan nuts are spat out by the goats while chewing their cud. (Credit: H. Garrido/EBD-CSIC)

What do goats and squirrels have in common?

They both climb trees, of course. While squirrels live amongst the branches, goats, or at least those in arid regions, climb them for dinner. And that’s good for the goats, and the trees.

Scientists have discovered that the domesticated goats in southern Morocco benefit the argan trees, Argania spinosa, by spitting out the seeds of the fruits they eat, which helps in seed dispersal. Argan trees play an important role in southern Morocco acting as a barrier for the Sahara Desert, and providing locals with wood, food, medicine and other materials. Argan oil, sometimes called “desert gold,” has also emerged as an international luxury commodity, prized for its supposed anti-aging and conditioning properties for hair and skin.

Tree-climbing goats play a crucial role dispersing nuts from argan trees, ensuring the success of future generations of this valuable resource. But how, exactly, do these goats get the job done?

“For plants, there are well-known reproductive benefits with dispersing their seeds far from the maternal plant, including seed and seedling survival,” the scientists — Miguel Delibes, Irene Castaneda and Jose M. Fedriani — write in their paper published in May in the journal Frontiers in Ecology and the Environment.

Domesticated goats in grassy, temperate climates don’t climb trees because their food is literally under hoof. But in hot regions where grasses are patchy, like Africa, Mexico and some parts of Europe, goats leap upon green shrubs and squat in trees for sustenance.

In southern Morocco, goats climb 30 feet to the treetops. During autumn, when ground vegetation is scarce, three-quarters of their foraging time is spent in the ubiquitous argan trees.

Biologists are aware that ruminants (goats, cows, sheep, deer, etc.) spread seeds through defecation. But the paper’s authors say that is not the only way to sow them. They have chronicled seed spitting among sheep and deer in Spain. So it seemed likely to them that the Moroccan goats were spitting as well, especially because the seeds of argan trees are large and probably difficult to pass through the goats’ intestines.

Like other ruminants, goats have multiple stomachs. They regurgitate the contents of the rumen, the first stomach stop, and chew on it some more. During this process, the goats spit out the argan seeds —sometimes days later and far from the parent tree, the researchers discovered.