To Turn Down the Global Thermostat, Plant Crops With Glossier Leaves 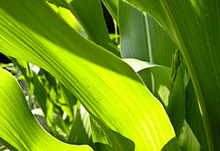 The ravages of global warming could be mitigated by convincing farmers around the world to plant slightly different varieties of corn, barley, and millet, according to a new study which examines the reflective properties of crop plants.

Plants reflects short wave energy back out to space much like snow and other light surfaces do. This is known as the albedo effect and is a key component of calculating the effects of climate change. As Arctic ice melts and is replaced by dark water, for instance, the region's warming is expected to accelerate. Plants have higher or lower reflectivity depending on things like the shape and size of their leaves and how waxy they are [New Scientist].

Lead researcher Andy Ridgwell and his colleagues were inspired in their work by the growing talk of geoengineering fixes for global warming, including ambitious and large-scale projects like seeding the Southern Ocean with iron to encourage algae blooms or building a huge sunshade in the Earth's orbit. The researchers say their proposal, which they call bio-geoengineering, is more realistic because it uses existing infrastructure.

“Arable agriculture is already a global-scale undertaking,” Dr. Ridgwell said. “We wondered whether you might grow slightly different crops and have some sort of climate impact." ... [I]t wouldn’t cost much, and it wouldn’t require much international cooperation. "It’s very practical, and it could just be done,” he said. “It’s not some trillion-dollar pie-in-the-sky idea” [The New York Times].

According to the results of Ridgwell's computer model, which were published in Current Biology [subscription required], the greatest impact would come from agricultural changes in North America and Europe.

In the Asian growing season, he explained, most of the reflection is done by clouds, so changing the ground's albedo would have little impact. The corollary of that is that most of the temperature reduction would happen over North America, Europe and neighbouring regions such as western Russia, and would be concentrated in the summer [BBC News].

The researchers said that those regions could see their summertime temperatures lowered by 1.8 degrees Fahrenheit. With forecasters predicting more frequent heat waves in Europe in the coming years, the researchers say that politicians should seriously consider their idea. It may be possible to convince farmers to switch to existing varieties of crop plants that have waxier leaves, the researchers wrote, but the idea needn't stop there.

"Ultimately, further regional cooling of the climate could be made through selective breeding or genetic modification to optimise crop plant albedo." The team emphasised that unlike growing biofuels, such a plan could be achieved without disrupting food production, either in terms of yield or the types of crops grown [Telegraph].

The researchers say it should be possible to breed plants that have highly reflective leaves but still have high crop yields. But if farmers still need a financial incentive to switch over, the researchers raised the possibility of making

high-albedo farms eligible for carbon credits which could be sold on the carbon trading markets [New Scientist].

EnvironmentSoon, You Could Be Wearing Mushroom Leather. But Will It Be Better for the Environment?
Recommendations From Our Store