Global Warming May Make Half the World Hungry by 2100 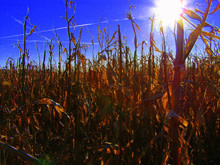 By 2100, climate change could mire half the world's population in a food crisis, according to a new report. The analysis is based on data from 23 climate change models gathered in the 2007 report by the Intergovernmental Panel on Climate Change. It predicts a 6 degree Fahrenheit rise in average growing-season temperatures in many areas and a 20 to 40 percent drop in crop yields. The hardest hit will be the tropics and subtropics, home to some of the world's poorest populations.

"You are talking about hundreds of millions of additional people looking for food because they won't be able to find it where they find it now" [Reuters], said study co-author David Battisti.

According to the report in Science [subscription required],

if the buildup of greenhouse-gas emissions isn't halted or slowed, the odds are higher than 90 percent that average growing-season temperatures will be higher than in recorded history

Rising temperatures may initially speed crop growth, but will ultimately reduce plant fertility and grain production. Beyond the rising temperatures, the danger to agriculture will be aggravated by drought. The tropics and subtropics--including Africa, the southern United States, and much of India, China, and South America--will be the first to feel the effects. By the end of the century, however, temperate regions will also suffer. The authors cite recent crop failures in temperate regions as cautionary tales:

During Western Europe's record heat wave of 2003, maize production fell by 30% in Italy and France, with wheat and fruit harvests declining by one-quarter. Three decades earlier, record heat in the Soviet Union disrupted the wheat harvest, causing a worldwide tripling of wheat prices — an early foreshadowing of how local problems can ripple through a globalized agricultural economy [Wired News]. A worldwide food crisis, unlike regional shortages, would mean that affected countries would have few resources to turn to for help.

"We don't know where the tipping points are - they could come quite quickly," [BBC News]

Related Content: 80beats: California is All Dried Up 80beats: Biofuels or Cheap Food: Do We Have to Choose?

says Geoff Hawtin, director of the International Centre for Tropical Agriculture. Beside mitigating the factors contributing to global warming—

"We're not doing a very good job of that," [BBC News] says Battisti—

"This is a compelling reason for us to invest in adaptation, because it is clear that this is the direction we are going in terms of temperature and it will take decades to develop new food crop varieties that can better withstand a warmer climate" [BBC News].