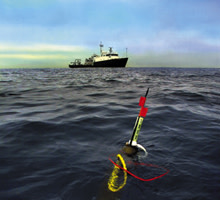 A German research ship carrying 20 tons of iron sulfate is currently motoring towards the South Atlantic, and the crew plans to dump its mineral cargo into the ocean in a controversial science experiment. The researchers will be testing a technique called ocean fertilization, in which iron is dumped into nutrient-poor waters to induce a huge blooms of phytoplankton. After the photosynthesizing plankton grows and absorbs carbon dioxide, researchers hope it will die and sink down to the seafloor still bearing that greenhouse gas in a natural form of carbon sequestration.

Ocean iron fertilization is considered one of the more promising options for global-scale geoengineering, which aims to slow or reverse the effects of climate change caused by man's burning of fossil fuels [Wired News].

But the so-called LOHAFEX experiment has raised the ire of some environmentalists, who worry about unknown consequences of interfering with the marine ecosystem.

Ocean fertilisation experiments have been carried out on a few occasions in the past, but became controversial in 2007 when a company called Planktos announced it would dump iron fillings [sic] off the coast of the Galapagos islands. Some environmental organisations ... expressed concerns that this was tantamount to pollution and, by affecting plankton at the bottom of the food chain could have unforeseen consequences [New Scientist].

The company Planktos went out of business and never conducted its experiment (largely due to the bad publicity), but the incident caused the UN Convention on Biological Diversity to ask countries not to permit ocean fertilization experiments. While environmentalists from the organization ETC Group originally argued that the new experiment is illegal because it violates the UN moratorium, it now appears that the experiment won approval from the German ministry of the environment based on an international maritime convention that allows legitimate scientific research on ocean fertilization. Researchers involved in the project say the experiment will answer crucial questions regarding the procedure's effectiveness.

The new study will address, among other things, marine biology, the flow of carbonaceous particles, and biodiversity questions that have barely been analysed during previous experiments, says [researcher] Karin Lochte. "These are exactly the kind of data you need to assess whether or not large-scale ocean fertilization is justified," she says [Nature News].

Geoengineering experts say the experiment shouldn't provoke fears of a large-scale alteration to the ocean's ecosystems.

"Twenty tonnes of iron particles in the vast ocean is very much [a] drop in the bucket and is unlikely to have a lasting effect," says Ken Caldeira of Stanford University. "The rational concern is that experiments will lead down some slippery slope - that small experiments could be scaled up without any regulation" [New Scientist].

Caldeira does believe that profit-motivated companies should be barred from conducting similar experiments as a first step towards selling carbon "offsets" to balance out emissions.

He says this would simply encourage companies to continue emitting greenhouse gases. Ocean fertilisation and other geoengineering schemes, says Caldeira, should be seen as potential short-term solutions that could cool temperatures while humans switch to non-fossil sources of energy [New Scientist].

Related Content: DISCOVER: 5 Most Radical Ways to Squelch a Climate Crisis (photo gallery) DISCOVER: Watery Grave profiles the scientists who thought up sequestering carbon in the ocean DISCOVER: Can We Repair the Air? Way back in 1992 we were already talking about geoengineering Discoblog: Royal Society Scientists Endorse a Major Earth MakeoverImage: Lawrence Berkeley Laboratory, a previous ocean fertilization experiment