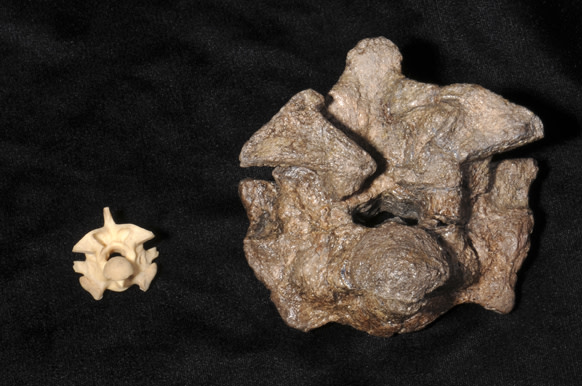 This is sure to be one of the most amazing scientific images of the year. You're looking at vertebrae from two species of snake. The smaller model on the left belongs to the anaconda, a giant serpent that can grow to 7 metres in length and weigh as much as 45kg. It's arguably the largest snake alive, so just think about how big the owner of the fossilised vertebra on the right would have been! There's a good reason why this new discovery - the largest snake that ever slithered - has been named Titanoboa.

Titanoboa cerrejonesis is new to science and was discovered by a team of North American scientists led by Jason Head at the University of Toronto. It's the latest fossil to emerge from Colombia's Cerrejon coal mine, one of the world's largest open-pit mines and an unexpected bonanza of prehistoric reptile fossils.

The giant serpent is closely related to today's boas and anacondas, snakes that kill their prey with suffocating coils. Living boas come in various sizes, but their similar proportions gave Head the data he needed to work out how big Titanoboa actually was. The backbones of boas are similar enough that, with help from a computer, you can tell where any individual vertebra sits down the length of the snake by looking at its shape. And you can take an accurate stab at the length of the entire snake based on the size of each vertebra - all members have the same number of segments, and their size is proportional to the animal's length.

Titanoboa's fossilised vertebra showed that it was a whopping 13 metres (42 feet) long. By comparison, the largest verifiable record for a living snake belongs to a 10-metre-long reticulated python, and that was probably a striking exception. Large population surveys of reticulated pythons have failed to find individuals longer than 6 metres. By contrast, Head's team analysed vertebrae from eight different specimens of Titanoboa and found that all of them were roughly the same size. A length of 13 metres was fairly ordinary for this extraordinary serpent. Not quite Jormungandr, but amazing nonetheless. 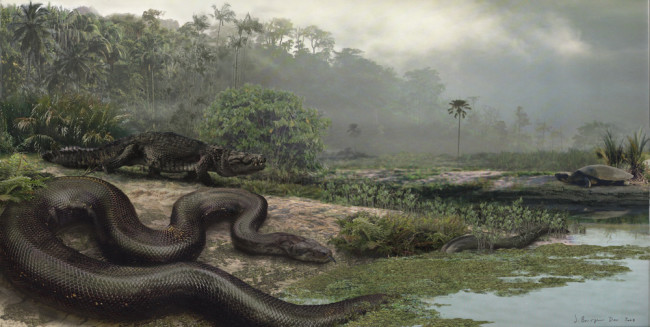 Even fossil snakes struggle to match Titanoboa's dimensions. Five years ago, Head's group used the same techniques to put measurements on the previous record holder, Gigantophis. Their study gave it a maximum length of 10.7 metres, easily eclipsed by their latest discovery.

Titanoboa was also a hefty creature. Using the length-weight ratios of a rock python and an anaconda as a guide, Head estimated that Titanoboa weighed in at over 1.3 tons. That's almost thirty times as heavy as the anaconda, the bulkiest species alive today. Its superlative measurements mean that Titanoboa was not only the largest snake in history, but also the largest land-living vertebrate following the demise of the dinosaurs.

It lived some 58-60 million years ago, when the Cerrejon basin was a giant floodplain, criss-crossed by rivers and nestled within a large tropical rainforest. This is exactly the type of habitat that anacondas thrive in today, and it's likely that Titanoboa shared a similar lifestyle. It may well have been aquatic and hunted similar prey, like crocodiles. Indeed, other fossils from the Cerrejon pit include early relatives of fishes, turtles and crocodiles - all suitable prey for Titanoboa.

The giant snake's measurements even tell us something about the climate of this ancient world. Snakes are cold-blooded. Their body temperature, and therefore their metabolism, depends on their surroundings, which slaps an upper limit onto the evolution of giants. At any given temperature, a snake can only become so large before its metabolic rate becomes too low to support its bulk. If Titanoboa was bigger than living species, its environment must have been much hotter.

Head estimated that the tropical rainforests where it lived must have had average yearly temperature of 32-33 degrees Celsius, far hotter than the equivalent temperatures for modern tropical forests. These estimates suggest that the forests of that period were experiencing greenhouse conditions. These conditions, part of the planet's history, have been written in stone, left for us to glean among the petrified bones of an ancient snake. 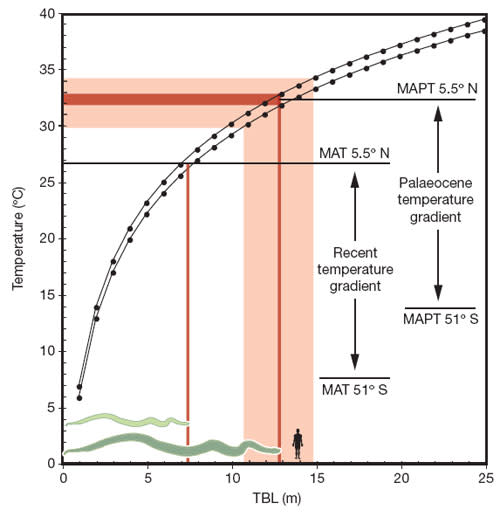 Update: This was Bora's idea 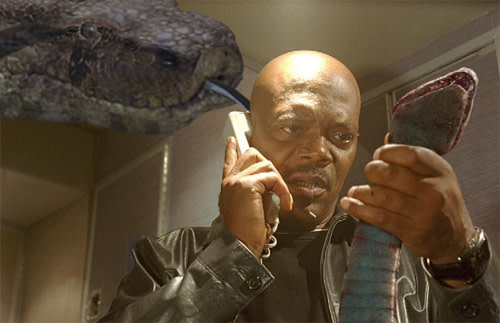