This dung beetle's air-conditioning unit is crap. No, really 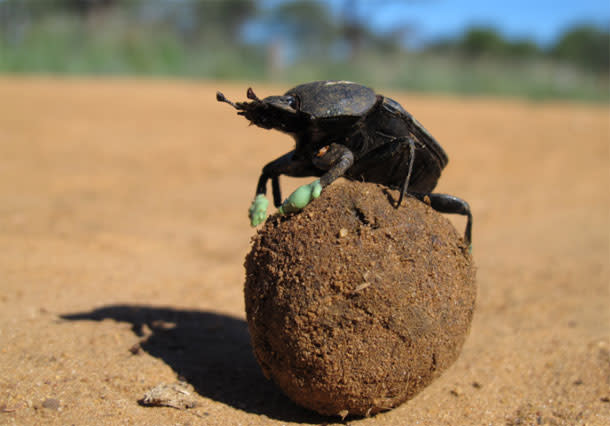 Here’s a dung beetle, sitting on a ball of poo that it made earlier, wearing a pair of adorable insulating mitts. We’ll get to the mitts later… The dung beetle, Scarabaeus nigroaeneus, as its name suggests, eats the faeces of large grazing mammals. When it finds a fresh pat, it fashions the dung into a ball and rolls it home, head down and walking backwards. That’s hard work. The balls can be 50 times heavier than the beetle, whose body heats up as it pushes around its weighty cargo. Heating up is something that an insect can’t afford to do in the South African desert, where the ground can reach a scorching 60 degrees Celsius in the middle of the day. But the beetle’s dung-rolling antics provide it with a constantly accessible way of beating the heat. By filming dung beetles with a heat-sensitive camera, Jochen Smolka from Lund University has found that their dung balls aren’t just take-away meals—they’re also portable coolers. Smolka placed dung beetles and their balls in a sandy circular arena, etched into their natural habitat. If he shaded the arena so it was cooler than 50°C, the beetles rolled their balls out without pause. On hotter ground, their front feet can heat up by as much as 10°C, and that triggers them to climb onto their balls. Here’s where the adorable green mitts come in—if Smolka placed these on the beetles, their front feet didn’t heat up, and they were less likely to climb onto their balls. Once on board, they ‘lick’ their front legs, passing them through their mouthparts and presumably spitting fluid onto them (see the video below). As the fluid evaporates, it draws heat away from the legs, which cool down within seconds. Desert ants do the same thing, as do kangaroos. [embed width="610"]http://youtu.be/cUqhhCPhXwY[/embed] But the ball is also very moist. Because water is constantly evaporating from, it stays at 32°C, far cooler than either the beetle or the soil. You can see the difference in the thermal video below, where the sand is a fiery yellow, but the beetle and the ball remain a cool blue. [embed width="610"]http://youtu.be/1SYgGxc5pho[/embed] The ball also cools all the sand it rolls over by 1.5°C, ensuring that the beetle’s footfalls land on more tolerable ground. And if their legs still too hot, they can simply climb on top of the ball to chill. Many desert animals rely on “thermal refuges” to keep cool. Some seek shade. Others, like desert ants, can spend three quarters of their foraging time on high grass stalks, trying to keep off the hot ground. But the dung beetle has what Smolka calls a “mobile thermal refuge”, and it’s more resilient for it. By pushing its cool ball of tasty faeces, it can walk in a straight line over featureless terrain, without having to ever scurry off in search of shelter. That’s just how it rolls. Reference: Smolka, Baird, Byrne, Jund, Warrant & Dacke. 2012. Dung beetles use their dung ball as a mobile thermal refuge. Current Biology 22, R1-2 Image from Smolka More on hot animals:

HealthAnxiety and Depression Relief, No Therapist Required
Recommendations From Our Store