For humans, sex is a simple matter of chromosomes: two Xs and we become female; one X and a Y and we develop into males. But things aren't so straightforward for many lizards - many studies have found that the temperature of the nest also has a say, even overriding the influence of the chromosomes. But the full story of how the lizard got its sex is even more complicated. For at least one species, the size of its egg also plays a role, with larger eggs producing females, and smaller ones yielding males.

The discovery comes from Richard Shine's group at the University of Sydney. In earlier work, they showed that if the Eastern three-linedskink (Bassiana duperreyi) incubates its eggs at low nest temperatures, XX carriers develop into males regardless of their chromosomes.

Now, Rajkumar Radder, a former member of Shine's team, has shown that the amount of yolk also determines the sex of a skink, but only at low temperatures. By deliberately adding and removing yolk from eggs using a syringe, he managed to alter the sex of the hatchlings. This degree of complexity is totally unprecedented - it means that for the skink, sex is a question of its chromosomes, the temperature it was reared under and the amount of yolk it had. 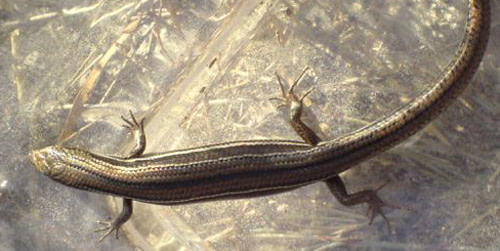 All of this started when Radder noticed that large eggs were more likely to produce females than males. Even within a single clutch, the females tended to hatch from the bigger eggs. The team collected pregnant skinks and raised their eggs within the confines of the university's labs. Less than 12 hours after the females had laid their eggs, Radder either removed yolk so that each egg weighed as much as the smallest one in the clutch, or added yolk taken from another egg. In some cases, he did "sham-removals", pierced the egg but never actually taking away any yolk.

The eggs were raised under different conditions, either at a cool 16C or a warm 22C. The warmer clutches all produced equal numbers of males and females, regardless of how much yolk they had. At cooler climes, things were very different - Radder's yolk-shifting antics radically changed the sex ratios of the lizards. The sham-removals did nothing, but when he actually took out yolk, 88% of the babies were male. When he added it, 93% were female. In many of these cases, the sex of the skinks didn't match the paths that their chromosomes should have set them on - there were many XX males and XY females. 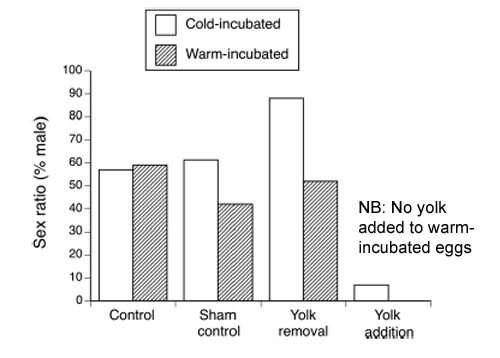 This elegant experiment raises an obvious question: how does the size of an egg affect the sex of the embryonic lizard within it? It's possible that depriving an embryo of yolk puts females at a greater disadvantage than males, and they become more likely to die. Indeed, only 67% of the smaller eggs hatched successfully, compared to a general success rate of 77%, and one of 94% for those whose yolk had been boosted. Still, the bias towards males was so massive that it couldn't possibly be due to females dying off more readily once their eggs were deprived of food.

Radder also ruled out the possibility of a mechanical trigger, where the sheer volume of the yolk affects the sex. When he repeated his experiments by injecting silicone gel rather than yolk, he failed to bias the clutch towards females.

The answer lies within the yolk itself, which only manages to feminise the lizards if it comes from a larger egg. If eggs are boosted with yolk smaller than themselves, only 29% produce females. If the yolk was drawn from a larger egg, 82% became females. Large eggs must have something in their yolk that pushes developing lizards down the female route.

For the moment, no one knows what that mystery substance might be, but if we were to take an educated guess, sex hormones would be a good one. Studies in other lizards have shown that eggs that hatch into males have very different hormonal cocktails than those which give rise to females. Radder and Shine have even shown that smaller eggs (the ones that produce males at lower temperatures) tend to have higher concentrations of dihydrotestosterone, the active guise of testosterone. Regardless of the answer, Radder's work shows that we have substantially underestimated the complex nature of sex in lizards.

If a female skink wants to bias her brood towards a certain sex, she could potentially do it in one of three ways. She could choose to fertilise her eggs with sperm that carry an X or a Y chromosome - this hasn't been directly demonstrated yet, but related lizard species can certainly select the sperm they use. She could choose a nest site with a certain temperature. She could even control how much yolk she allocates to each egg. She's spoilt for choice.

Radder even suggests a plausible sequence of events to explain the evolution of this complicated tiered system. The skink may have started off with a chromosome-based method, in order to achieve an equal number of sons and daughters. But in cold nests, typical of the high mountain regions that these skinks often inhabit, daughters fare worse than sons. In that case, handing control of sex to temperature rather than genetics would be preferable in cool environments where sons have an edge.

However, if nests are so cold that almost all hatchlings are male, daughters are in high demand and having them suddenly becomes a good way of ensuring that your offspring get more mates. That may favour a mechanism that allows females to skew the sex ratio of their clutches more towards the average split. The yolk-based system is just such a system - it allows the female skink to maintain control over the sex of her clutch, even at low temperatures that would otherwise bias towards males.

Reference: Current Biology to be published this week

Note: Radder passed away last year and his lab have prepared a video tribute to him.