Scientists say that this ancient species reshapes the timeline of fish evolution. 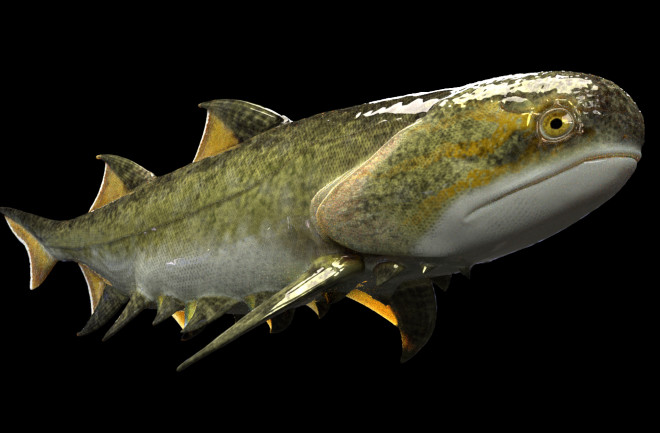 Most paleontologists are solid on several aspects of fish evolution. For one, they’re pretty positive that the jawless fish emerged first. For two, they’re also mostly sure that the jawed fish evolved second, only to later diversify into an assortment of different taxons both in the water and outside of it.

Yet, for all that they understand about the evolution of fish, scientists still struggle to fill in the details. This includes when, specifically, several types of fish first appeared in the fossil record.

A new paper published in Nature pushes scientists one step closer to clarifying all of these details. According to the paper, a team of researchers recently found and analyzed the fossils of an ancient species of "spiny shark" known as Fanjingshania renovata. These 439-million-year-old fossils suggest that the jawed fish actually emerged many years earlier than previously assumed.

Most scientists seem to agree that the first fish to appear around 520 million years ago lacked jaws. They also tend to accept that it wasn’t until about 100 million years later that two new types of now-extinct fish, the placoderms and the acanthodians, evolved their hinging sets of jawbones.

The acanthodians, also known as the "spiny sharks," boasted streamlined, shark-shaped bodies, which were covered with bony armor. And, in contrast to their modern shark descendants, the acanthodians also possessed several pairs of stiff spines that supported their fins.

Now, the recovery and investigation of the fossils of F. renovata — an ancient fish with seemingly similar sets of armor and spines — reveals that the 439-million-year-old specimen is the oldest acanthodian, predating all other spiny shark body fossils by about 15 million years. Not only that, but the specimen is also the oldest undisputed jawed fish fossil to be found by paleontologists.

"The new discovery puts into question existing models of vertebrate evolution by significantly condensing the timeframe for the emergence of jawed fish from their closest jawless ancestors," says study author Ivan Sansom from the University of Birmingham, in a press release. "This will have profound impact on how we assess evolutionary rates in early vertebrates."

The research team found the shattered fossils of F. renovata in a site in South China. After a particularly painstaking reconstruction process, the thousands of fossil fragments revealed the specimen's anatomical similarities to the acanthodians, including its armor and fin-supporting spines.

The team realized that the specimen's spines closely mimicked those of an already identified class of spiny sharks called climatiids. This realization finally allowed the researchers to place F. renovata firmly in the acanthodian camp.

Ultimately, the team concludes that the finding is crucial for understanding the origins and development of acanthodians, jawed fish and all other jawed vertebrates, including humans.

"This is the oldest jawed fish with known anatomy," says a study author ZHU Min from the Institute of Vertebrate Paleontology and Paleoanthropology at the Chinese Academy of Sciences, in a press release. "The new data allowed us to place Fanjingshania in the phylogenic tree of early vertebrates and gain much needed information about the evolutionary steps leading to the origin of important vertebrate adaptations such as jaws."