These Extinct Giant Crocs May Have Hunted Our Ancient Ancestors

Research uncovers two species of ancient crocodiles that might have preyed upon primates in what is now the Great Rift Valley in Africa. 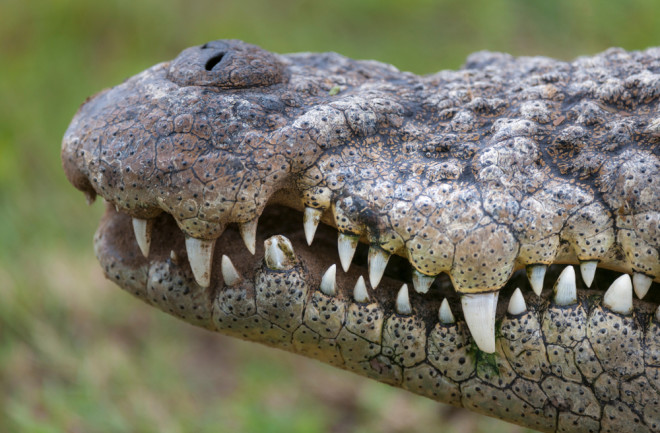 Today, the Great Rift Valley spans from the lower tip of the Middle East all the way down to southern Africa. This dry swath of land is interspersed with grasslands that make up the African savannah. But it has not always been that way.

Some 15 million years ago, this part of the world — which would later become the cradle of humankind — looked entirely different. Much of the area was made up of dense tropical rainforests and humid woodlands that made it easier for predators to hide. One of the most dangerous was the giant dwarf crocodile, a vicious carnivore which likely had a taste for the primates that would one day evolve into hominids.

These ancient human relatives still walked on all fours and probably measured no taller than 3 or 4 feet, according to Christopher Brochu, a paleontologist at the University of Iowa. Their life in the Rift Valley was likely a risky endeavor, thanks to this now extinct crocodile species.

Brochu’s findings, published in the journal The Anatomical Record, show that the creature could grow to about three times the size of today’s African dwarf crocodile, a small but aggressive species found in Central West Africa. And like modern crocodiles, the giant dwarf would have gone for whatever it could swallow.

Two newly discovered dwarf crocodile species called Kinyang mabokoensis and Kinyang tchernovi lived in present day Kenya during the middle Miocene period. Both had broad snouts that made them look like they were cracking a smile, but in reality, "they could bite your head off,” as Brochu recently explained to IowaNow News.

Brochu uncovered this new species of crocodilian while looking over a collection of Rift Valley fossils in Nairobi, Kenya. “Just by looking at the specimen, I could tell that this was a big crocodile but it was related to the modern dwarf crocodile, not the Nile crocodile,” he says.

The more he looked at these and other similar samples, Brochu realized this species was entirely undiscovered. The palette, tip of the snout and brain encasement resembled the modern dwarf crocodile.

“The bigger picture is that if you look at the east African Rift Valley system, between 19 and 15 million years ago, this is the type of crocodilian you would find,” says Brochu. This, he says, has to do with the topography of the time. Unlike Nile crocodiles, who spend most of their time in the water, these crocs lived on land. The modern dwarf crocodile, for example, is found only in the forests of West Africa.

Dwarf crocodiles live exclusively in forested areas because they forage on the forest floor and their nesting behavior requires more vegetation. Some crocs dig holes in the mud to nest and some collect vegetation to form a mound that will eventually house their eggs. “Dwarf crocodiles (ancient and modern) are strict mound nesters, meaning they require vegetation to build their nests and they also prefer to live on the forest floor,” says Brochu.

Why Did They Go Extinct?

We don’t know for sure why this ferocious-hunter species disappeared. But we know that the modern dwarf crocodile survives today in what’s left of the West African tropical rainforests, similar to its extinct ancestor. So the extinction likely has to do with changes in topography.

Volcanic activity, says Brochu, may have led to the lakes and rivers becoming too alkaline. “But what we think most likely happened is a drying trend across East Africa, which made it difficult for them to survive,” he says.

Modern humans, who would later evolve from the Great Rift Valley, may have dodged a bullet with the extinction of the giant dwarf. But that’s not to say that deadly croc-human encounters are a thing of the past. Nile crocodiles can grow up to 20-feet-long today, weighing in at roughly 2,000 pounds. And these mega-beasts attacked 214 humans last year alone.