These Bees Bore Through Rock to Make Nests 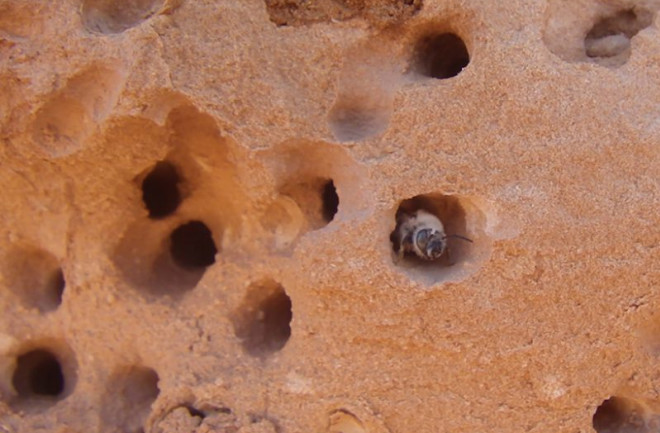 An Anthophora pueblo in one of the many tunnels the bees bore into the rock. (Credit: Michael Orr) The big bad wolf won't be blowing these bees' house down any time soon. Unlike other species of excavating bees who build their homes in wood or soil, Anthophora pueblo carves a home out rock in the Utah desert, creating nests that can withstand the tests of time and elements. The species was discovered almost 40 years ago by a USDA entomologist named Frank Parker who found dozens of new species of insects in the region. He took samples of the unique hives, but never formally published his findings, instead filing them away in a basement. It took a doctoral student at Utah State University named Michael Orr to bring the samples out of the basement and into the light, reports Earth & Space Science News.

Doing Well in the Desert

Orr describes the new species in a paper published earlier this month in Current Biology. He made several trips to the desert to track the bees down, and found a collection of five new hives, as well as the ones Parker stumbled upon decades ago. The bees seem to prefer living in sandstone, but will make do with silt or clay if none is available. The new species is named after the Pueblo Native Americans who similarly built their homes into cliffs in the American Southwest. The bees use their mandibles to scrape away the sandstone, eventually hollowing out networks of tunnels where they lay eggs and store food. The scratching is so loud, in fact, that it can be heard from several feet away, Orr writes. Scraping away the rock with their mouthparts gets a little tiring, so they supplement their efforts with splashes of water that help to break down the rock and aid their digging. Mining still takes a toll on the bees' bodies though — Orr reports that by the time females have reached old age, their mandibles are often worn down to the point of being barely usable.

Hard Work Worth It

But the bees' persistence pays off. Their sturdy homes provide far better protection during storms than nests of soil or wood, and the sandstone may also help protect against parasites and microbes. In addition, a nest they can depend on gives bees greater flexibility when choosing when to emerge from their eggs. Without the risk of the nest falling over or getting crushed, bees can stay safe while waiting for more optimal conditions to greet the world. Because of their longevity, the nests house successive generations of bees that inherit the property from their parents and grandparents. The next generation adds on to the structure when needed. However, as the desert ecosystem changes with the climate, the bees may not be able to find the water they rely on to mine — and that could be a problem. Orr found at least one abandoned nest near a dried-up water source, indicating that the bees aren't willing to put in the effort in the absence of water.