From storks to humpback whales, these five species demonstrate conservation success stories and nature's incredible ability to bounce back. 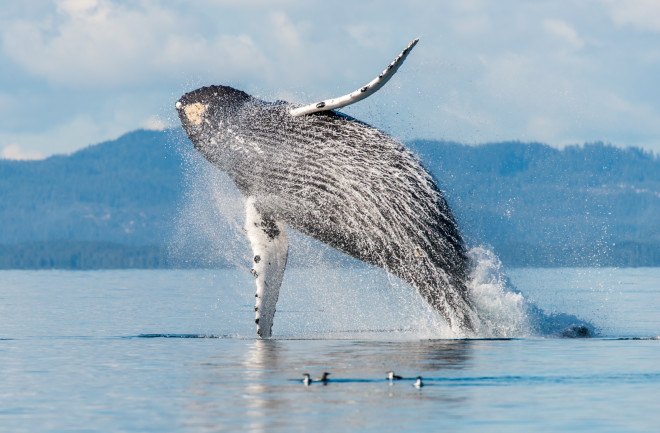 Climate change, deforestation, sea level rise and mass extinction; the news often feels pretty bleak when it comes to the environment. But our planet is also incredibly resilient, and a few simple steps can go a long way towards protecting endangered species. At one point or another, these animals bordered on extinction — and then made a roaring comeback.

A few decades ago, the wood stork was on the brink of extinction. Inland water had been diverted from the Everglades as a result of development. Fish stores plummeted and so did the number of woodstorks, says Simona Picardi, an assistant professor of ecology at Utah State University.

These massive birds feed by feel, meaning they drop their beaks into the water and wade until they find a fish. Once they do, their beaks slam shut, an instinctive response that’s among the fastest in the animal kingdom. But when there aren’t enough fish they have trouble finding food. “Wood storks aren’t efficient foragers. They’re a Goldielocks bird, meaning when conditions aren’t just right they have trouble feeding,” Picardi says.

In the 1970s, when they couldn’t find food in the Everglades wood storks expanded north and began nesting and foraging in the Carolinas. This led to an expansion of the population. And even more importantly, a massive Everglades restoration project in 2000 helped restore the natural flow of water so that wood storks were once again able to hunt efficiently in Florida waters. In 2014, the birds were down listed from endangered to threatened as their numbers rose worldwide.

By the 1980s, the population of humpback whales had plummeted, down to around 1,200 left in oceans worldwide. But then a moratorium on commercial whaling in 1985 gave the humpback whale population an opportunity to recover. While the whales still face the threat of entanglement within fishing gear as well as threats from boat strikes, their numbers have risen globally, reaching around 135,000. They’re no longer endangered and healthy populations of humpbacks can be found globally.

At around 300 pounds, the green sea turtle is the largest hard shelled sea turtle. It’s an awe-inspiring species that, unlike other sea turtles, is primarily vegetarian. But in the 1990s, just a handful of green sea turtles could be found in the wild. Their numbers had dwindled down to around 50 as a result of being trapped by fishing trawls as well as habitat destruction. But after a few decades of protection under the Endangered Species Act, green sea turtles have rebounded in numbers to some 13,000 seen nesting at The Archie Carr National Wildlife Refuge, which was established for their protection in 1989.

According to Joseph Clark, an ecologist with the Northern Rocky Mountain Science Center, the population of the Louisiana Black Bear has rebounded in recent decades as a result of wetland restoration projects in Louisiana which turned farmland back into bear habitats. “The oak seedlings planted through the program provide cover for the bears and allow them to move between habitats,” he says.

This is important because the bears are a “density dependent species,” which means they can only tolerate a certain number of animals within their territory. When they don’t have enough room, they end up decimating their own species in an effort to compete for food and mates.  But the Louisiana black bear also amazingly adaptable. Most notably, they’ve been able to thrive in an ever-changing habitat. They’ve also learned to survive during the wet season by hibernating and nurturing their cubs high in the trees until the flood waters recede.

In the 1950s, the American alligator was nearly hunted to extinction so that its skin could be fashioned into shoes and purses. In 1967, it was placed on the Endangered Species List. But thanks to a team effort from state and federal agencies, as well as conservation groups, it's made quite the comeback: Since then, the largest reptile in North America is no longer endangered, with an estimated 5 million alligators spread out across the southeastern United States.

It can feel overwhelming to think that nearly all of the world’s species are threatened by global climate change, hunting or habitat destruction. But it’s good to know that we can make a difference in helping those same species bounce back — simple steps in habitat restoration and animal protections combined with the resiliency of these amazing species can make a difference. That's why it's essential for conservationists and others to keep fighting for the protection of animals that need us now more than ever.