The 5 Mass Extinctions That Have Swept Our Planet

From the Ordovician period to present day where we may be experiencing a sixth mass extinction, here are the mass extinctions that repeatedly wiped out life on Earth. 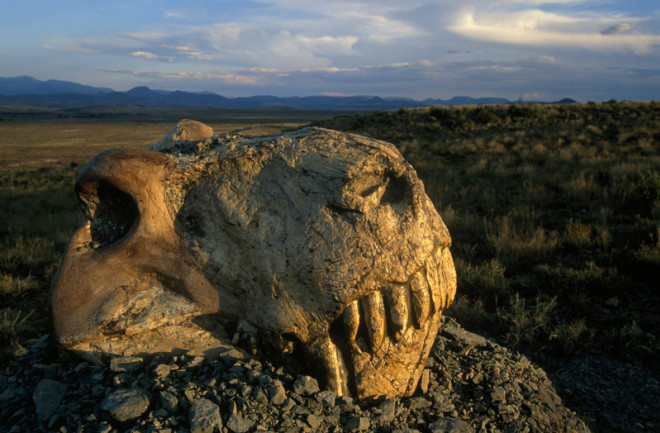 Synapsids, such as this dinogorgon from South Africa’s Karoo Basin, were nearly wiped out 251 million years ago during the End-Permian mass extinction. (Credit: Jonathan Blair/National Geographic Creative)

Congratulations, you’re part of the 1 percent. That is, the 1 percent of species on Earth not yet extinct: For the last 3.5 billion or so years, about 99 percent of the estimated 4 billion species that ever evolved are no longer around.

Many evolutionary family trees got the ax, so to speak, during a mass extinction. These events are defined as the loss of least 75 percent of species in the geological blink of an eye — which can range from thousands to millions of years. Researchers have enough data from the fossil record going back just over half a billion years to identify five such mass extinction events, and many scientists believe we’re in the middle of a sixth.

Great die-offs result from a perfect storm of multiple calamities, such as ocean acidification coupled with a spike in land temperatures. While the catalysts of these events are sometimes unclear, large-scale volcanic activity, spread across an entire region, is a usual suspect. Theories that asteroid strikes initiate the massive die-offs remain largely speculative: Only one space rock has been conclusively linked to a mass extinction.

Each mass extinction ended a geologic period — that’s why researchers refer to them by names such as End-Cretaceous. But it’s not all bad news: Mass extinctions topple ecological hierarchies, and in that vacuum, surviving species often thrive, exploding in diversity and territory.

Trilobites (foreground) got their start more than 520 million years ago, but faced their first decline during the End-Ordovician mass extinction. (Credit: Esteban De Armas/Alamy Stock Photo)

When: About 443 million years ago

Why: In the first pulse of a double whammy, ice sheets advanced, radically changing ocean currents and creating a harsh climate in the equatorial and mid-latitude regions. Many of the species that survived this first hit adapted to their new world, only to succumb to the second pulse: a sudden melt, another climate shift and another ocean circulation switch-up.

How bad: About 86 percent of species and 57 percent of genera — the next-higher taxonomic division, which may be a better gauge of biodiversity loss — went extinct.

What died: Animals that didn’t make it include most trilobite species, many corals and several brachiopods, a hard-shell marine invertebrate often mistaken for a clam today.

What thrived: Sea sponges did well in the aftermath of the End-Ordovician — a pattern repeated in subsequent mass extinctions. A 2017 Current Biology study suggests these humble marine animals may assist in the recovery of entire ecosystems. The sponges stabilize sediment, creating a favorable environment for brachiopods and other suspension feeders.

2. End-Devonian: The Long Road to Oblivion

Why: While the term mass extinction may suggest instant global catastrophe, these events can take millions of years. The End-Devonian, for example, consisted of a series of pulses in climate change over 20 million-plus years that led to periodic and sudden drops in biodiversity, including the Hangenberg Crisis, which some researchers consider a separate mass extinction event. The changes, possibly the result of significant volcanic activity in Siberia, reduced oxygen levels in the oceans and caused other environmental shifts.

What died: Sadly, those awesome-looking armored fish known as placoderms were wiped out. Many species of coral and more trilobites bit the dust, too.

What thrived: Little guys fared best, particularly vertebrates less than a meter long (about 3.3 feet). Survivors included tetrapods, four-limbed animals that were transitioning from sea to land and would eventually evolve into reptiles, amphibians and mammals.

3. End-Permian: The Big One

When: 251 million years ago

Why: Volcanic activity in Siberia is considered the main culprit for this mightiest of mass extinctions. Regionwide eruptions spewed toxic gas and acidified the oceans. The disruption may have even shredded the ozone layer, allowing in deadly ultraviolet radiation. A 2014 study suggested the apocalypse unfolded over a span of about 50,000 years.

What died: So many forests were destroyed, apparently during wildfires, that afterward there was nothing left to burn; researchers have identified a “charcoal gap” in the geological record. Among the animals that met their doom: many amphibians and several synapsids, a diverse group of animals that included several apex predators of their day.

What thrived: Several species of fungus weathered the event well, possibly because they fed off all the decaying organisms that didn’t. The loss of many top-of-the-food-chain synapsids may have cleared the path for the earliest dinosaurs — and the first mammals, descended from one lowly synapsid branch that survived.

Keichousaurus hui was a common marine reptile during much of the Triassic Period, but it didn’t live to see the Jurassic that followed. (Credit: O. Louis Mazzatenta/National Geographic Creative)

When: 201 million years ago

Why: Volcanoes were at it again, but this time we can’t blame Siberia. Instead, massive eruptions in a hot spot at the center of what would eventually be the Atlantic Ocean created another bout of climate calamity. And it played like an echo of the End-Permian.

How bad: About 80 percent of species and 47 percent of genera went extinct.

What died: This was not a good time to be a conodont. Already in decline, the last of these ribbonlike fish, as well as many reptiles, were among the hardest hit.

What thrived: Dinosaurs really hit their stride after the End-Triassic, exploding in diversity, as did their archosaur relatives, the crocodylomorphs, descendants of which include modern crocodiles.

5. End-Cretaceous: It Really Made an Impact

Why: The cause of the End-Cretaceous extinction remains hotly debated. No one disputes that a chunk of space rock slammed into the planet near Mexico’s Yucatan Peninsula at the time. But researchers disagree on whether the asteroid strike caused or merely contributed to the die-off. Large-scale volcanic activity in India’s Deccan Traps was already underway before the impact, and a Science Advances study published in February suggests both the asteroid hit and Deccan Traps activity coincided with a general uptick in planetwide volcanism. Whatever the catalyst, it appears a spike in carbon dioxide and a drop in ocean oxygen levels were followed by a rapid post-asteroid cooling.

How bad: About 76 percent of species and 40 percent of genera went extinct.

What died: The sun finally set on the Long Day of the Dinosaur, though many other organisms were also wiped out, such as ammonites, mollusks with distinctive spiral shells.

Read more: The End of Dinosaurs: The End-Cretaceous Mass Extinction

In the 1990s, paleontologist and famed conservationist Richard Leakey warned that human activity was causing a “sixth extinction.” In the decades since Leakey’s observation, with piles of new supporting evidence, many more researchers have signed on to the idea.

Across time and around the planet, extinctions of one or another individual species are always occurring. Known as the “background rate” and documented both historically and in the fossil record, these extinctions are like low-volume static compared with the sudden cymbal crash of a mass die-off. Determining extinction rates as they are unfolding is difficult, but a 2015 Science Advances study, using a range of conservative estimates, placed the current pace at up to 100 times the normal background rate.

Human activities are to blame, including population growth, increased resource consumption and climate change spurred by fossil fuel burning and the release of greenhouse gases.

In the journal PNAS in 2017, scientists concluded that focusing on species extinction may actually underrepresent the severity of what one team called “biological annihilation.” The global extinction of a species is, after all, just the final nail in the coffin.

The downward spiral begins with the destruction and fragmentation of habitat, and the introduction of invasive species and pathogens. The killing of individual members of a species through overhunting or poaching also takes its toll. Just ask any rhino, if you can find one. All of these activities can result, over time, in local extinctions known as extirpations. Even before global extinction of a species occurs, these extirpations reduce biodiversity and can destabilize ecosystems, leading to more extinctions.

As Leakey observed in his landmark 1995 book on the topic: “Homo sapiens might not only be the agent of the sixth extinction, but also risks being one of its victims.”