The Western U.S. is Now Blanketed in an Earthquake Early Warning Network

People across the western United States will now get vital seconds of warning if a large earthquakes hits the region. Those seconds will save lives. 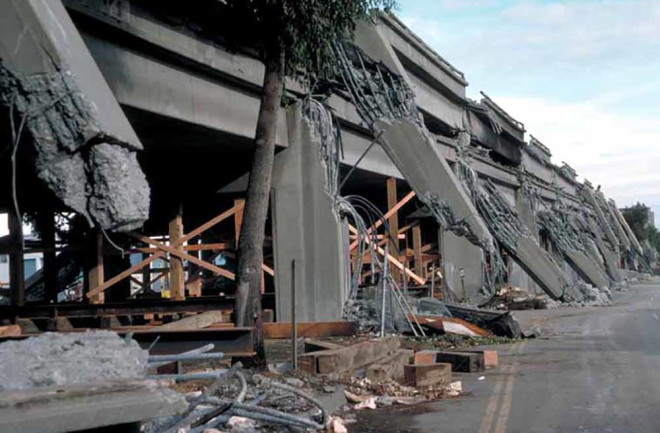 Support columns failed and the upper deck collapsed on the Cypress Viaduct of Interstate 880 in Oakland during the 1989 Loma Prieta earthquake in California. Credit: US Geological Survey.

Earthquakes strike unexpectedly. That is a major reason why they can be so deadly. People go from doing what they are doing to being thrust into a deadly situation of collapsing building, falling debris and crumbling roads. Yet, the fatalities from earthquakes can be reduced by simply providing people with a few to tens of seconds of warning before the shaking really starts. Thanks to the ShakeAlert Earthquake warning system that now stretches from length of the west coast of the United States, millions of people can have those seconds.

Let's get a few things straight first. ShakeAlert is not predicting earthquakes. No one can predict earthquakes and anything you read otherwise is a sham. There are those on the internet who claim they can read the tea leaves (or, in some cases, planetary alignments, weather, etc.) to tell you when and where a large earthquake will happen, but it is not possible.

Instead, what a system like ShakeNet does is exploit the fact that data travels fast and that earthquakes produce seismic waves that travel at different speeds.

When a fault in the Earth moves to create an earthquake, there are four main types of seismic waves created thanks to all the energy released. The fastest is the p-waves, or compression waves. It turns out that they don't do much damage at all and most of the time, they are only noticed by seismometers. So, an earthquake happens and the p-waves go racing off at high speeds.

Next fastest are the s-waves, or shear waves. These move the rocks in the Earth perpendicular to the direction the wave is moving. This can translate to vertical or horizontal motion of the Earth's surface and in an earthquake of sufficient magnitude, s-waves can produce damage.

Finally, there are surface waves that move slowest and cause the most damage. That's because they take the surface of the Earth and move it like a blanket or tablecloth. One type of wave shakes the surface side to side (Love waves), the other move the surface like a rolling ocean wave (Rayleigh waves).

How ShakeAlert Works: Outrunning the Shaking

A schematic diagram of how ShakeAlert operates. Credit: US Geological Survey.

That speed difference between the speediest p-waves and the slower Rayleigh and Love waves exploited by ShakeAlert can be vital for allowing people to get to safety. If an earthquake occurs somewhere in the Mojave desert outside Los Angeles, seismometers will detect the p-wave first and then, with ShakeAlert, send a message to the system that a large earthquake occured. Almost instantaneous, the system will blast messages to people's phones warning them of impending shaking and how long they might have. The data in the alert moves faster than any of the seismic waves.

During the 2011 Virginia earthquake, I experienced an ad-hoc version of this where I noticed people on Twitter closer to the epicenter of the earthquake say they were feeling shaking and then, maybe 30 seconds later, I noticed shaking in my office in central Ohio.

The ShakeAlert system will warn people about earthquakes above magnitude 5, which generally can cause physical damage. What should you do in those seconds that you might have between the alert and the shaking? Well, you should get underneath a sturdy table or desk and cover your head (in you're inside) or move away from tall buildings and windows (if you're outside). So many fatalities in earthquakes come from people being struck by debris, so just these simple steps can be life-saving.

The ShakeAlert warnings are operated through FEMA (Federal Emergency Management Agency) and the US Geological Survey, so they could be recieved by cell phones much like an Amber alert. There are also a bevy of apps that can offer similiar alerts using the system. The west coast has now joined countries like Japan in offering these vital earthquake alerts -- all part of the modernization of our hazard monitoring system in the United States.