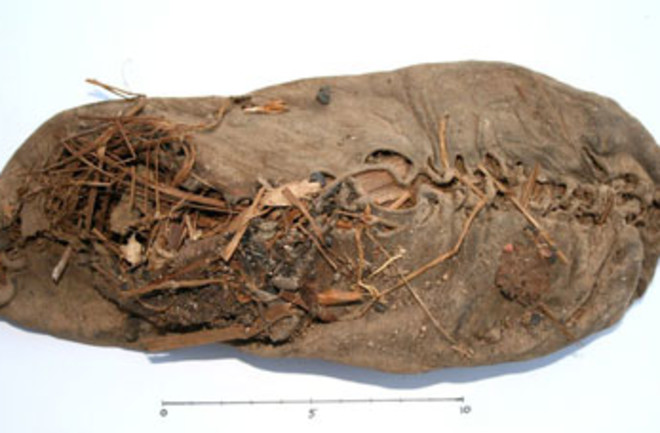 Three jaw-less heads and one really old shoe. These aren't the clues in a Law and Order episode; they're findings from a limestone cave in Armenia. As described in a paper published yesterday in PLoS ONE, archaeologists believe they have found the world's oldest leather shoe: it's 5,500 years old. "It's pretty weird," said lead author Ron Pinhasi to CNN regarding the disembodied heads and the placement of the well-preserved shoe. The ancient sneaker was stuffed with grass, though archaeologists can't say whether the grass was intended as insulation or whether it helped maintain the shoe's shape.

"We thought originally it could be a discard, but at the same time, it's very strange, because we have only one shoe, and it's in very good shape," Pinhasi said. "It looks like it was more than likely deliberately placed in this way." [CNN]

The right-footed shoe--which looks a bit like a baked potato--has some features that might entice even modern buyers: for one, its maker fashioned it from a single piece of cow leather (like a pricey pair of today's "whole cut" footwear), and it has leather laces. It's about a women's size seven, but, researchers say, it might have graced a small-footed man.

The shoe was discovered by Armenian PhD student, Ms Diana Zardaryan, of the Institute of Archaeology, Armenia, in a pit that also included a broken pot and sheep's horns. "I was amazed to find that even the shoe-laces were preserved," she recalled. [PLos ONE release]

Scientists determined the shoe's age by cutting two small samples of the leather and sending it to radioactive dating centers at the Oxford Radiocarbon Accelerator Unit at the University of Oxford and the University of California–Irvine Accelerator Mass Spectrometry Facility. Others have discovered older sandals--the oldest are about 7,000 to 7,500 years old and were found in the Arnold Research Cave in Missouri--but this is the oldest full shoe ever discovered. Fashion shoe designer, Manolo Blahnik, was impressed by how much the shoe looked like today's models. He suspects that even 5,500 years ago, wearers wanted to look chic:

"The shoe's function was obviously to protect the foot, but I am in no doubt that a certain appearance of a shoe meant belonging to a particular tribe," Blahnik said. "I am sure it was part of the outfit which a specific tribe wore to distinguish their identity from another." [National Geographic]

Preservation went well beyond the modern shoebox. The limestone cave itself had relatively stable temperatures and little humidity, and the shoe was covered in layers of sheep dung.

"We thought initially that the shoe and other objects were about 600-700 years old because they were in such good condition," Pinhasi said. "It was only when the material was dated that we realized that the shoe was older by a few hundred years than the shoes worn by Oetzi, the Iceman," he added, referring to Europe's oldest natural human mummy, which dates back 5,300 years. [Discovery News]

Pinhasi is now waiting, metaphorically, for the other shoe to drop: He will return to explore another nearby cave this Friday and told CNN that he believes that his team has uncovered only two percent of the area's findings. Related content: 80beats: No Shoes, No Problem? Barefoot Runners Put Far Less Stress on Their Feet 80beats: “Pornographic” Statue Could Be World’s Oldest Piece of Figurative Art 80beats: World’s Oldest Flute Shows First Europeans Were a Musical Bunch Discoblog: World’s Oldest Bible, Now Available on Your Laptop DISCOVER: Archaeologists Find the World’s Oldest Arrowheads