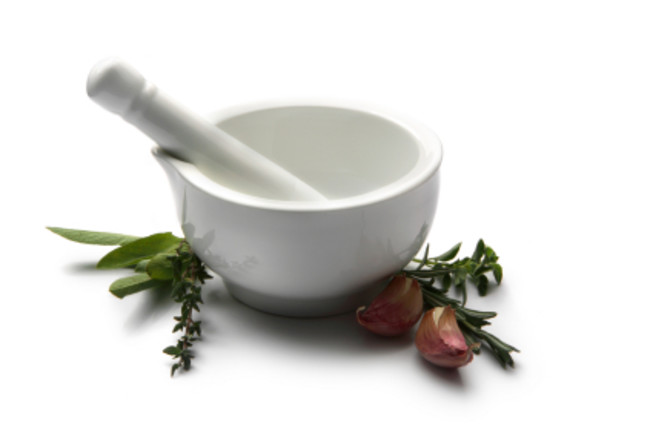 Humans didn't begin major agriculture until about 10,000 years ago. But 20,000 years before that they were grinding their own flour, a new study (in press) suggests, adding more proof that our forebears were eating the beginnings of a more balanced diet while still roving as hunter-gatherers. Anna Revedin's team says in today's Proceedings of the National Academy of Sciences that they found traces evidence of flour still stuck in 30,000-year-old stones the team found in Russia, Italy, and the Czech Republic.

The flour, likely suitable for making flatbread or cakes, didn’t just give stone age people some dinnertime variety. Because it could be stored in dried form, flour would have given them greater independence from environmental and seasonal circumstance. [Wired.com]

The stones themselves appear to have been shaped for grinding, like an archaic mortar and pestle.

They found tiny remnants of starch on the grinding tools and in some cases were able identify the plants they came from. In Italy, these included the starch-rich rhizomes from Typha angustifolia, or narrow leaf cat tail, Typha latifolia, broad leaf cattail, as well as Brachypodium, grasses that have caryopsis, or grains, and are easy to grind and grow well in the area. Another grain was found that appears to be from Sparganium, or bur reed. [USA Today]

Because these people lived long before agriculture, they would have relied on the wild varieties of these species. No problem, says team member Laura Longo—those plants would have been widely distributed across Europe in those days. And if you cook them, the energy content is actually quite good, Longo says. Scratched-up animal bones showing where early humans cut off the meat are much easier to find than evidence for omnivorousness. Through finds like this one, though, the idea of strictly meat-eating group living back then has been crumbling.

Bruce Hardy, a paleoanthropologist at Kenyon College in Gambier, Ohio, expects that flour-making dates back even further than 30,000 years. "This is not isolated to a small group of people. It's a regular part of subsistence for humans," he says. After all, humans, ancient or modern, just aren't equipped to live on a diet of meat alone. "If you get that much meat in your diet not balanced out with other nutrients, you get protein poisoning," says Hardy. [Nature]

80beats: Have Archaeologists Found Evidence of an Ancient Funeral Feast?

80beats: In a 12,000-Year-Old Grave, a Shaman Shares Her Tomb With Animal Totems

80beats: Stone Age Graveyard in the Sahara Recalls an Era of Lakes and Wetlands