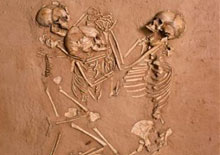 In an arid and lifeless stretch of the Sahara, archaeologists have discovered a massive graveyard and remnants of early settlements that hark back to Stone Age days when the desert was wet, green, and habitable. Researchers say the find is a striking reminder that climates and environments can shift drastically over the geologically short time period of 10,000 years. In an area of Sahara that's known to nomads as the "desert within a desert," researchers found evidence of thriving prehistoric cultures and rich ecosystems on the edge of a lake.

There were also hundreds of animal bones. In addition to antelope and giraffe, [lead researcher Paul] Sereno quickly recognized the remains of water-adapted creatures like crocodiles and hippos, then turtles, fish, and clams. "Everywhere you turned, there were bones belonging to animals that don't live in the desert," said Sereno. "I realized we were in the Green Sahara" [National Geographic].

The cemetery was found in 2000 when Sereno, a paleontologist by training, was hunting for dinosaur fossils in the dunes. Subsequent expeditions revealed not only a graveyard, but also refuse mounds and other indicators of two permanent settlements, one dating from the Sahara's wettest period around 10,000 years ago, and the second from another fecund era that began around 7,000 years ago. The initial inhabitants,

the Kiffian culture, were tall hunters of wild game who also fished with harpoons carved from animal bone. Later, a more lightly built people, the Tenerians, lived there, hunting, fishing and herding cattle. An examination of their fossilized skeletons indicated that both cultures lived and ate relatively well [The New York Times].

Researchers believe that the Tenerians left around 4,500 years ago when weather patterns shifted and pushed seasonal monsoons farther South, causing the region's lakes and wetlands to dry up. The report, published in the journal PLoS ONE, details findings from some of the 200 graves already discovered.

"The most amazing find so far is a grave with a female and two children hugging each other. They were carefully arranged in this position. This strongly indicated they had spiritual beliefs and cared for their dead," says [researcher Elena] Garcea [New Scientist].