In a 12,000-Year-Old Grave, a Shaman Shares Her Tomb With Animal Totems 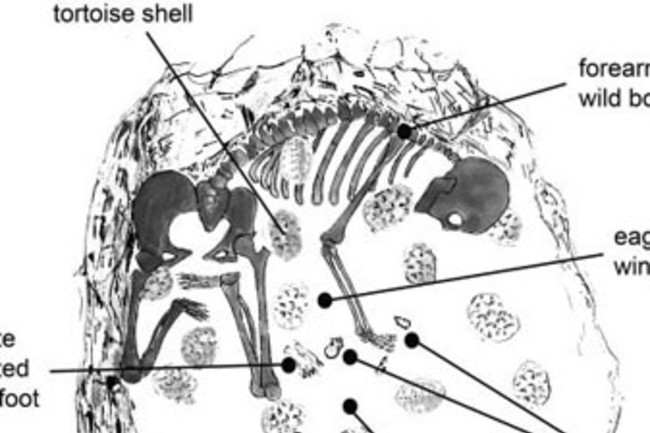 In a dusty cave in Israel, archaeologists have unearthed a 12,000-year-old grave that they say may be the resting spot of one of the earliest known shamans. The grave contains the artfully arranged bones of a roughly 45-year-old woman as well as a collection of animal and human body parts, including a complete human foot, 50 tortoise shells, and bones from a wild boar, an eagle, and a leopard.

"What was unusual here was there were so many different parts of different animals that were unusual, that were clearly put there on purpose," said researcher Natalie Munro.... This care along with the animal parts point to the grave belonging to both an important member of the society and possibly a healer called a shaman.... Such healers mediate between the human and spirit worlds, often summoning the help of animal spirits along their quests, according to the researchers [LiveScience].

In the study, published in the Proceedings of the National Academy of Sciences [subscription required], researchers describe the cemetery of a prehistoric Natufian settlement.

The Natufian culture, which lasted from roughly 15,000 to 11,500 years ago, played a central role in the transition from foraging to farming and was the first known society to live in year-round settlements. Burials of the dead increased dramatically in number among the Natufians, indicating that these people assigned much symbolic importance to treatment of the dead [Science News].

The woman's skeleton was separated from the other 26 burial sites found in the cave, and her grave was the only one lined with slabs of limestone. Ten large stones had been placed on her head, arms, and pelvis, perhaps to hold her body in a particular position, or

because the community was trying to keep the shaman and her spirit inside the grave, [study coauthor Leore] Grosman said. It is likely that the 50 tortoises were brought live to the site and were eaten as part of a feast surrounding the burial, according to the researchers [Bloomberg].