The Science Behind Dog DNA Tests

The popular mail-in kits have arrived thanks to a sweeping research project that maps the canine genome, similar to efforts with human genetics. 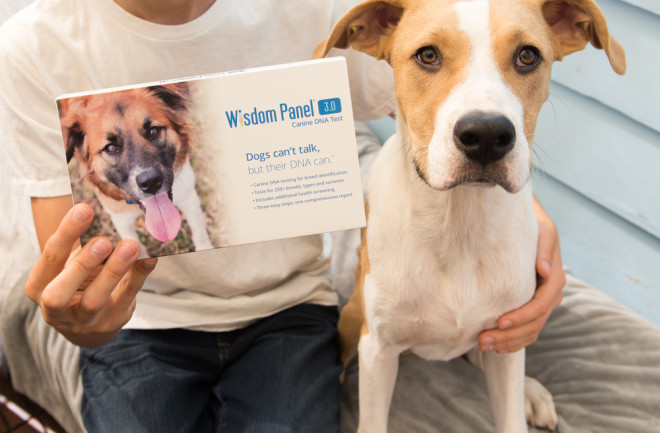 The photo on the animal rescue’s website showed a small brown and tan puppy with amber eyes and floppy ears. “Sugar Plum,” as they named her, had a fuzzy backstory. She was taken from her mother when she was just five weeks old and dumped at a shelter. The rescue wasn’t sure of her breed, and their best guess was dachshund, perhaps with some chihuahua mixed in.

We renamed our little puppy Sofia and marveled at her confidence and sass. She pranced from one room to the next like she had somewhere to be, and she authoritatively took all the toys from the bin and claimed them as her own. She struck us as a chihuahua, and we decided to do a doggie DNA test to learn her exact breed background.

These breed detection tests are only possible due to a broader dog genome project, which was inspired by efforts to map our own species’ DNA.

The field of DNA identification and mapping saw significant progress in the 1990s and early 2000s. In 2003, researchers completed the Human Genome Project, which advanced our understanding of more than 20,000 human genes. The project now serves scientists studying diseases such as age-related macular degeneration, Alzheimer’s and multiple sclerosis.

Amid detailed work on our own genetic code, studies set out to analyze dog DNA. It all began with a boxer named Tasha, whose DNA sequence served as a crucial foundation for later studies after it was published in 2005. “Dogs were prioritized for a number of reasons. They are an excellent model for a variety of human health conditions including cancer,” says Rebecca Chodroff Foran, the head of research and development for Wisdom Panel, a dog and cat breed and health detection company.

Dogs were also chosen because breeding practices over the past two centuries led to what scientists call genetic drift, or a loss of genetic diversity within specific breeds. Although a chihuahua and Great Dane are more similar than they are different, breeding standards have separated dogs into “distinct genetic clusters.” This means a dog breed can be defined at the molecular level — only tiny bits of DNA are needed to correctly identify a dog breed.

By the early 2000s, the Dog Genome Project had advanced to the point that geneticists could learn more about disease susceptibility in our furry companions. And as with human DNA, improved technology has lowered costs and made breed detection kits more affordable for consumers. Multiple companies now offer them for about $100, as well as premium kits that test for drug sensitivities or mutations such as Acra Mutilation Syndrome, in which a dog doesn’t feel pain and is at risk for hurting themselves.

The test process begins with an at-home kit that includes two small cytology brushes, which are used to collect cheek cells from inside the dog’s mouth. The brush is rubbed against the cheek for 15 seconds and air dried for five minutes before being packed into the shipping box.

At Wisdom Panel, laboratory technicians place the brush into a solution to extract the DNA. The DNA is then separated into single strands and snipped to isolate SNPs, or single nucleotide polymorphisms, which are the most common type of genetic variation and occur at a single spot in a DNA sequence.

These small segments are labeled with fluorescent tags and put onto a microarray, a tool that resembles a grid with dozens of small wells. In each well, the segments attach to DNA samples called probes, which contain trait and breed information from the broader dog genome. The bound strands illuminate a designated color, and the microarray is placed in a scanner to read the results — If a strand from your dog's sample binds with a given probe, it matches those specific traits.

All in all, Wisdom Panel can read approximately 100,000 different SNPs at once, Foran says. Within two weeks, the consumer receives a report detailing their dog or cat’s breed as well as the notable genetic traits related to ear type, face shape and coat variations.

Sofia’s DNA was compared with a database of 20,000 purebred dogs, and her test revealed that she is indeed mostly a chihuahua — 71 percent, to be exact. She’s also 9 percent dachshund, 7 percent Shih Tzu, and trace amounts of six other breeds.

In addition to identifying the presence of breed types as low as 1 percent, the test also identifies the genes that give dogs their appearance. As for coat colors, the test looks for variants in chocolate, dominant black, recessive black, fawn, recessive red, and widow’s peak (a blend of white and dark hair).

The genetic coat variations help explain why the rescue thought Sofia was a dachshund. She has two copies of a chocolate gene (TYRP1) variant that result in rich brown fur. She also has two copies of an ASIP gene variant, which give her tan markings on her legs and muzzle, as well as two little tan “pips” around her eyebrows.

The test also identifies genes connected to coat patterns such as dark spotting, merle, white spotting, or saddle tan. It also reveals variants for hairlessness, long fur or a tendency to shed.

Other genetic traits tested included the floppy ear variant, represented by the MSRB3 gene. Little Sofia didn’t have any copies of this gene, and her once-floppy dachshund-like ears perked up within her first month home.

As for body traits, the test reveals qualities such as a short tail, muscular back, and high altitude adaptation. The body traits section also helped explain why the rescue thought Sofia was a dachshund — she has one copy of the FGF4 variant, which causes legs to be a bit shorter and is common in many breeds including chihuahuas, corgis and Shih Tzus.

Regardless of her breed, we were glad to have our little dog. We had just lost our elderly chihuahua to cancer prior to adopting Sofia, and it seemed fitting that a new chihuahua found her way into our lives — disguised as a dachshund.

This article has been updated to explain the role of SNPs in the DNA testing process.