The Oldest Continuously Inhabited City in the World

Famous for its historical and cultural significance, the city of Jericho offers important insights into humanity's first settlements. 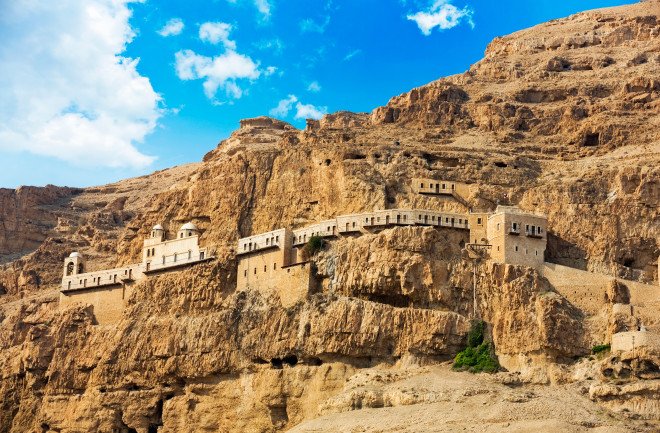 It’s one of the first places where we know hunter-gatherers transitioned to settlements. We can see the world’s first community gathering buildings there, as well as domesticated animals and agriculture. Not to mention all of the biblical stories written about its walls. It’s Jericho, and it’s the oldest continuously inhabited city in the world.

Bill Finlayson is a professor of archeology at Oxford University who’s spent ample time at archeological sites in the city. He says that around 15,000 years ago in Jericho, and elsewhere around the Middle East, hunter-gatherers began to stay in one place more frequently, finding rich areas where they had access to different resources. Research shows these early humans were able to extend their stay by building more permanent structures and hunting in a more sustainable manner.

The Tower of Jericho

One of the first indications that hunter gatherers had invested in their community is the Tower of Jericho. Built around 12,000 years ago, the remarkable Neolithic stone structure lies hidden below the surface in thousands of years of dusty deposits. The tower was probably built by late hunter-gatherers, although it's difficult to know for sure. Since the city has been continually lived in for all these years, layers of sediment have grown up around the structure over time. “Although it’s a tower, you’re looking down on it,” Finlayson says.

We don’t know its exact purpose, either — although it was likely a place where the community came together and expressed themselves. It wasn’t an underground shelter where some secret society met, Finlayson says; it was highly visible and meant to be seen from afar. “Lot’s of people have fanciful ideas about the tower’s purpose, but these things are very hard to prove,” he says.

Although hunter-gatherers stayed put for much longer, Jericho had likely completed the transition to agriculture around 7,000 years ago. We have evidence, says Finlayson, that they were growing wheat, barley, chickpeas and lentils, as well as domesticating goats and sheep. Farming is an ecological web, and humans in Jericho quickly figured out that if they were growing crops, they needed animals to produce the manure.

By this time, Jericho was blossoming into a small city with a few thousand residents living there year round. It was also located next to a huge spring, which is the main reason that it remained an appealing place to live for so many years. “Until recently, the spring was absolutely enormous with lots of fresh water running very reliably all year round," says Finlayson. "That’s really what makes Jericho such a special place."

The Walls of Jericho

While the Neolithic period is most appealing to Finlayson, other archeologists have been scouring the site for something far more recent: the famed walls of Jericho referenced in the Bible. In the Book of Joshua, dating to around 1,400 B.C., the Bible details the story of Joshua leading the Israelites to battle against the Canaanites and the walls of Jericho falling just as God said they would.

Researchers and theologists alike have been looking for the real walls for decades. But according to Finlayson, the main wall found around Jericho is prehistoric and isn’t timed with the stories of the Bible. The wall shows no sign of conflict or war. And while it is substantial, the wall is only built on one side of the town, which means its purpose was most likely to prevent flooding, not invaders. A few Bronze Age walls that pertained to around the same time as the stories of the Bible have also been found. But it would be really difficult to tie them to a particular Biblical passage, Finlayson says.

We might never know for sure whether the walls dug up in Jericho are the same walls mentioned in the Bible. Still, Jericho's overall importance shouldn't be underestimated. While today it’s a sleepy town in the West Bank, known for citrus and warm weather, it remains a symbol of what humans can accomplish when we join forces. It’s one of the first places where we truly came together, living amongst each other and resolving our differences. When structures become stone and animals stay in one place, you can’t just walk away when someone makes you angry.