The Life and Death of Pando 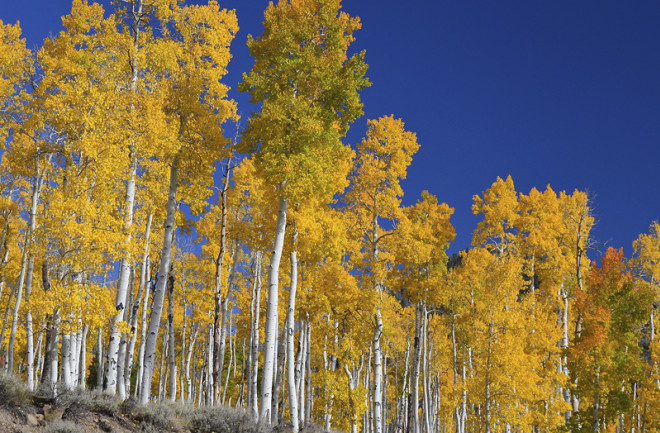 Deer and elk feast on aspen trees, devouring the young ones before they can mature. (Credit: Lance Oditt/Studio 47.60 north)

On a cold, sunny October day, I travel with Paul Rogers, an ecologist at Utah State University, to see the largest known living organism on Earth. The creature resides in the high mountains of southern Utah on public land. It’s a 106-acre aspen stand named Pando — literally, “I spread,” in Latin. Linked by a single root system, Pando consists of tens of thousands of genetically identical trees, cloned from a sprout that emerged after the last glaciation in southern Utah, roughly 13,000 years ago. At some point since then — we don’t know exactly when, because we don’t know how old Pando is — this enormous being germinated from a seed the size of a pepper grain.

Pando is dying, and Rogers has been trying to figure out why. The 55-year-old has studied quaking aspen for more than two decades. Disease, blight, climate change and wildfire suppression have all taken their toll on Pando, but the root cause of decline is a surprising one: too many herbivores, namely mule deer. The deer feast on the aspen, literally eating away the young before they can mature.

Scientists put a fence around part of Pando’s forest to see if it would prevent overgrazing. It’s worked. The fenced-in forest is recovering. (Credit: Alison Mackey/Discover)

Pando is now made up almost solely of old and deteriorating trees. “A whole society, this huge clone, and it’s all senior citizens,” Rogers says as we walk through the clone. “There are no children, no young trees, no middle-aged. So what comes next? Where are the babies? It’s a system out of whack.”

We wend toward an experimental section of the clone that has been fenced off from the hungry ungulates since 2013 and will remain fenced indefinitely. Funded by an alliance of nonprofit conservationists in cooperation with the U.S. Forest Service, scientists hope to see what happens when Pando is freed from the pressure of herbivores. “Stop the herbivory, and this is what happens,” Rogers says as he runs his fingers on a new aspen sprout. Safe behind the fencing, the year-old plant is slender and smooth, about as tall as an infant first learning to stand. “There’s been a remarkable return of the young.”

Pando is like any other aspen grove — except that it’s the largest known to humans. With their glowing white bark and yellow autumn color, aspen forests are iconic in the American West. Aspen leaves move in a curious manner when touched by the wind, due to the way the leaf attaches to the stem. This produces the quaking light of the typical aspen forest, a romantic effect that gives the species its name. This feature also happens to benefit the understory: More light filters through the leaves to produce more diversity of grasses, mosses and lichens. Aspens are also the region’s single most biodiverse woodland ecosystem. Their bark is soft, offering easy habitat for scores of species of cavity-nesting birds.

I spend several hours walking in the woods with Rogers as he recounts the importance of his favorite tree. He tells me the Ute Indian tribal legend, about the branch scars that are common on aspen trunks and how they resemble eyes. The eyes watch humankind. They watch the young hunter in the forest to ensure he is respectful, reverent. His kill is observed, judged. The forest of eyes, the legend says, is one big eye.

A breeze blows, and the trees that still wear their leaves — most have shed them by October — shake in the light of the sun. Rogers pauses. “That light, that sound, registering the wind,” he says. “Walking into an aspen grove is a peculiar experience. It’s a place of contemplation. And you begin to think: What’s an individual? This whole forest is an individual, and the so-called individuals we see are separate trees that are one. We’re not used to thinking about living beings in the way that Pando makes us think.”

Rogers says scientists have never found a clone even half the size of Pando, but no one’s really gone looking. He sees the fencing as a proving ground for restoration of other clones across the West. Because overbrowsing, he warns, is now afflicting hundreds of thousands of acres of aspen.

Under federal law, state wildlife agencies have almost total control over the management of deer and elk populations on public lands, including the national forests. The agencies want to maximize revenue from hunting fees. Hence, they have overseen increases in ungulates, including mule deer and elk, the two most sought-after species for trophy and meat hunters. The agencies could manage for lower populations, but this runs against “sustained yield” — which means sustained income for the agencies over time.

Elk populations across the West are higher than at any time in recorded history. In Utah, where there were few elk prior to European settlement, the introduced population tops 77,000. The current population estimate of deer in Utah is well over 300,000.

“States manage wildlife, particularly large game species, under an agricultural model, as a crop,” Rogers says. “This does not always track well for long-term forest resilience. Elk today are frequenting habitat where they never existed, like on desert plateaus. It’s extremely problematic for the ecosystems that never evolved with that kind of browsing pressure.”

Pando’s size makes it special — it’s twice as big as the next largest aspen clone. But its plight isn’t unique; aspens are overeaten throughout the West. (Credit: Lance Oditt/Studio 47.60 North)

Justin Shannon, the big game program coordinator at the Utah Division of Wildlife Resources, disagrees with this claim of overabundance. “Deer and elk populations in Utah are below the statewide management objectives, and the elk population in Utah has decreased three years in a row,” Shannon said in an email.

Elk browsing may be more harmful to aspen than deer because of their large appetites.

“In many areas of the West, aspen is doomed unless something is done to control abundant elk that eat the young aspen sprouts,” says Bill Ripple, an ecologist at Oregon State University who has pioneered the study of herbivory in ecosystems. Richard Lindroth, an entomologist at the University of Wisconsin-Madison, agrees. He says that if we don’t reduce the impact of ungulates on aspen, it will inevitably lead to losing many of these trees across the West.

One answer to overbrowsing is to let nature go to work on the landscape, with more predators eating more ungulates. In a natural predator-prey cycle, cougars and wolves generally keep deer and elk populations in check, as has happened in many of the West’s national parks. And predators, especially pack hunters like wolves, create an “ecology of fear,” affecting ungulate behavior in ways that ultimately benefit aspen. Constantly looking over their shoulders and forced to keep on the move, elk don’t linger in the same feeding areas. This distributes the damage from their browsing, and aspen are better able to regenerate.

A small number of wolves now roam in New Mexico and Arizona. But wolves were extirpated from Utah at the behest of powerful ranching interests more than a century ago. When I asked the Utah Division of Wildlife Resources about the possibility of a wolf reintroduction into the state, a spokeswoman there told me, “Utah has no intention of reintroducing wolves.”

For now, Pando will have to keep hiding behind its protective fencing.

This story originally appeared in print as "The Life and Death of Pando."