For the past few months, a dark lava dome has been growing on La Soufrière on the island of St. Vincent. Today, that eruption suddenly became explosive. 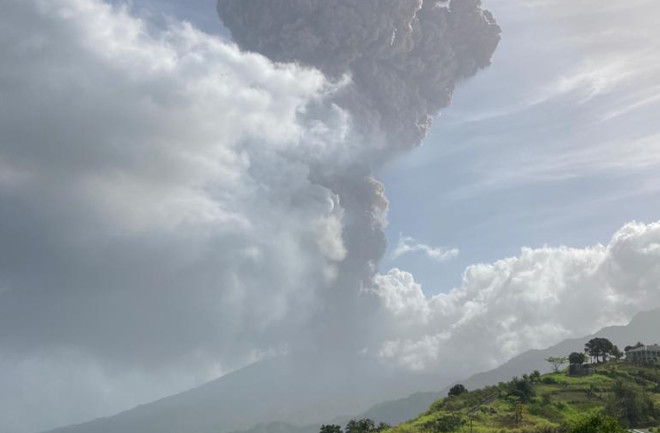 The ash plume from La Soufriere on St. Vincent on April 9, 2021. This was the first explosive eruption at the volcano since 1979. Credit: University of the West Indies.

The volcanoes of the West Indies have produced some of the most explosive and deadly eruptions over the past few centuries. The fact that many of these populated islands are dominated by volcanoes means they can be especially perilous when these volcanoes rumble back to life. Over the past few months, experts have been watching the activity at La Soufrière on St. Vincent closely as, at first, sticky black lava oozed out to form a new lava dome at the volcano's summit. It appears that La Soufrière on St. Vincent has taken a decidely more explosive turn.

Early on the morning of April 9, the volcano started emitting a tall grey-tan plume of volcanic ash into the air above the small island. Ash is falling on many communities on northern half of the island. The ash plume is mainly being blown to the east from the island towards Barbados and has reached 20,000 feet.

Prime Minister Ralph Gonsalves declared an emergency and called for the evacuation of much of the northern part of the island on April 8 after increasing earthquakes and gas emissions pointed towards something larger brewing. This part is the "red zone" of the volcanic hazard maps for St. Vincent and upwards of 16,000 people live in the region. Many of the evacuees were moved onto cruise ships to be taken to nearby islands for the time being.

Webcam view of the lava dome at La Soufriere on St. Vincent on April 8, 2021. Credit: University of the West Indies.

This is the first explosive eruption at La Soufrière since 1979, although lava has been erupting at the summit since late December 2020. A change in character of an eruption like this is not uncommon. The sticky basaltic andesite lava like the dome that had been forming at La Soufrière (above) can trap gases as new magma rises underneath, creating pressure that can lead to a more explosive style of eruption. Volcanologists monitoring the volcano will need to see if the new magma erupting is more gas rich, and thus more explosive, to try to understand how this eruption might progress.

Both the 1979 and 1902 explosive eruption cycles at La Soufrière were quite significant, ranking VEI 3 and 4 respectively. Those eruptions lasted months, so if this cycle is similar, people may need to stay away from the volcano (and their homes) for quite a long time.