The Earliest Horse Dentist Was Just...Sawful 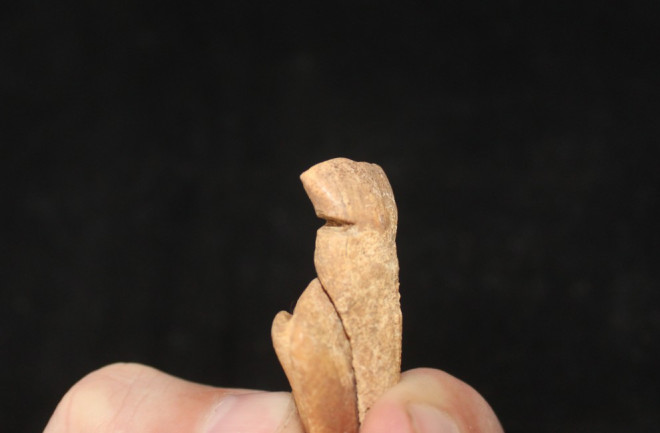 More than 3,000 years old, this tooth from a young horse shows clear signs of sawing. It's one of the earliest examples of horse dentistry, which appears to have originated on the Mongolian steppe. (Credit: PNAS) Out on the Mongolian steppe, where the horse remains the primary mode of transport, modern herders regularly remove certain teeth from yearlings to avoid potential problems. The herders typically use pliers or screwdrivers for the task. If that makes you squirm, you might want to stop reading — because archaeologists have found the earliest evidence of horse dentistry, and it's even more cringe-inducing. If you're not too squeamish, however, read on, because researchers discovered not only the oldest patients but also how equine chomper care changed over time as the horse's role in the ancient world evolved. Without question, Equus caballus has been the most consequential domesticated animal of the past 5,000 years. Sure, the dog was domesticated thousands of years earlier, and the silkworm was a catalyst for global trade, but what domesticated animal transported goods and tradesmen, warriors and explorers on all seven continents*? Why, the horse, of course. (*Shout-out to the ponies that Robert F. Scott and, less famously, Earnest Shackleton took to Antarctica more than a century ago, even though the bottom of the world, much like the Mines of Moria, is no place for a pony.) Current archaeological and genetic evidence suggests the horse was first domesticated, more than 5,000 years ago, on the Central Eurasian steppes in what's now northern Kazakhstan and southern Russia. More than 2,000 years ago, scholars in both China and along the Mediterranean were filling veterinary texts with information about keeping horses healthy. Many of these early how-to guides were highly specialized — the earliest such text, from Syria's Hittite Empire, describes how to feed and treat chariot horses — which suggests to researchers that equine veterinary care was well-established long before the texts were written. And a major part of horse care, both today and in antiquity, involves dentistry. True Grit Horses evolved to eat often gritty plant matter, which actually does a decent job of keeping their teeth clean and healthy — if the teeth themselves are properly aligned. Because the animals' teeth are constantly being worn down, the tooth itself continues to grow throughout the animal's life. However, a tooth maleruption — a kind of cool-sounding word for the unfortunate problem of a tooth that's not growing correctly — can cause pain, tissue damage and difficulty chewing. Given the importance of horses to the people who herded them around the Central Eurasian steppes, even before they rode them, it's easy to understand why ensuring a proper set of chompers was of interest to the pastoralists. And once people did start riding horses, dentistry became even more important. About 90 percent of horses develop a first premolar that's also called a "wolf tooth" (again, another cool phrase to describe something that's not cool at all). This vestigial tooth is an evolutionary leftover that serves no real purpose for the modern horse but can cause problems — similar to the human tailbone. The wolf tooth can interfere with a bit, typically made of metal, which most riders use for better control of the animal. The bit fits across the animal's tongue and lower teeth and, if a wolf tooth is present, it can cause pain and tissue damage. Most wolf teeth fall out naturally by the time the horse is three years old, but up to a third of these vestigial premolars are permanent. Today, both in modern equine dentistry practice and traditional Mongolian horse culture, both malerupted teeth and wolf teeth are removed in juvenile horses. Many horse dentists, with some controversy, also file away parts of other teeth to better accommodate a bit.

A Mongolian herder removes the "wolf tooth," also known as the first premolar, from a young horse using a screwdriver. (Credit: Dimitri Staszewski/Taylor et al. 2018/Origins of Equine Dentistry/PNAS)Stone Saws To find out how early pastoralists cared for the teeth of their horses, researchers examined teeth from dozens of sites across Mongolia that spanned more than two millennia, from the Bronze Age, through the Iron Age and into the Early Middle Ages. The Late Bronze Age sites are ritual horse burials from the deer stone-khirigsuur (DSK) complex, 1300-700 B.C. DSK, perhaps the earliest horse culture in the region, sacrificed and buried horses in individual mounds by the thousands. Researchers determined, unequivocally, that two of the ten juvenile horses from Bronze Age DSK sites had received dental care: the earliest such evidence of horse dentistry. Both of the teeth with evidence of human handiwork are milk teeth, also known as deciduous teeth...in other words, baby teeth. One of the examples came from Uguumur, a site in west-Central Mongolia, and was from a horse that was 2-2.5 years old at time of death. The animal was missing another tooth, and the researchers believe that the earlier loss of that upper incisor caused the tooth next to it to malerupt and likely interfere with chewing. Horse dentist to the rescue! Well, sort of... A notch, visible with the naked eye, as well as microscopic striations in the tooth's enamel and dentine layers revealed that someone had attempted an unsuccessful extraction of the wayward tooth, most likely with a sharpened stone edge used to saw into the tooth. Stone tools were the earliest implements in human dentistry as well, more than 13,000 years ago. Thought of it makes that awful scrape-scrape-scrape during your dental exam seem a little less terrible, no? The second tooth speciman, from the east-central Mongolia site of Egiin Gol Valley, is also a deciduous incisor. It appears to have broken while the permanent tooth beneath it erupted. The apparent result: a fragment of baby tooth alongside the adult tooth, which also likely caused pain and difficulty chewing. Here, another unsuccessful attempt at extraction resulted in a crown fracture of the tooth. It appears the work was done with a blunter tool, though the researchers did not speculate on what it might have been. Direct dating of the animals determined they died about 3,150 years ago. As the new study notes of the tooth-sawing for both horses, "Removing the upper part of the tooth in this fashion...would have been a slow, laborious process throughout which the animal would be likely to bite or strike." A Revolution Recorded In Teeth None of the other Bronze Age horses analyzed in the study showed evidence of similar dental procedures, successful or otherwise. In addition, while not all of the Bronze Age juvenile horses were well-preserved, nine of the ten that were had wolf teeth. Without humans going after them with pliers and screwdrivers and other implements, about 90 percent of yearlings will grow at least one wolf tooth. The researchers concluded that early dentistry attempts appeared to be focused on malerupted teeth. That pattern changed abruptly in the Iron Age, however, coinciding with widespread regional use of a metal bit, which allowed for greater control by the rider. Nearly all of the juvenile horses examined from this later period, beginning about 2,700 years ago, have had their wolf teeth removed. For one Late Iron Age animal, things went particularly badly: Its lower second premolar, which would have been adjacent to the wolf tooth, was severely damaged, including its root. Based on the degree and angle of trauma, the team concluded it was likely damaged by a leveraging motion during extraction of the wolf tooth. While that was surely a painful experience for the horse, consider the alternative: an Early Middle Age specimen in the study retained an upper wolf tooth that showed beveling caused by a metal bit, no doubt resulting in pain as well. While the details of the procedures may be hard to swallow, the archaeozoological study is significant, moving the start of equine dentistry back by more than a millennium and providing a timeline of increasingly sophisticated care directly linked to technological advances in horseback riding. The research appears today in PNAS.