Nine Russian hikers died mysteriously in the mountains more than 60 years ago. New research suggests that an avalanche may have sealed their fate. 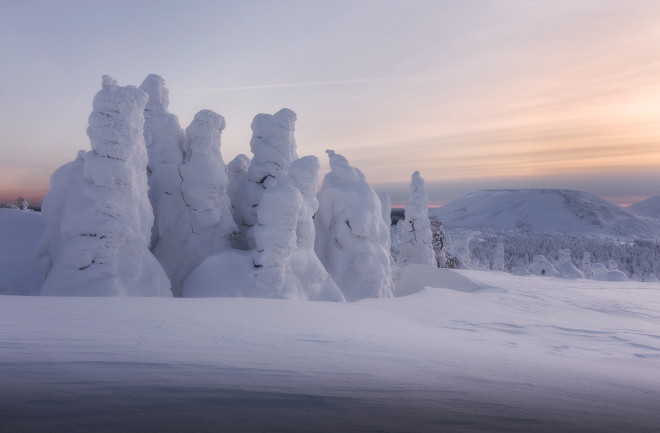 In the wintry Ural Mountains in 1959, rescuers found the bodies of nine Russian hikers strewn across the landscape. The search team had been sent out after the group of travelers had failed to show up at their planned destination more than a week earlier. As the rescuers uncovered all the evidence, they grew more and more perplexed — and the strange circumstances and bizarre constellation of evidence at the site has prevented anyone from definitively announcing a cause of death to this day, more than 60 years later.

The Dyatlov Pass Incident, as it is now known, has inspired a plethora of conspiracy theories, like yetis or military experiments run amok, and even copycat expeditions. Nobody has a conclusive answer, despite decades of scrutiny. But new research published in Nature aims to explain their deaths by looking at the mountains’ topography and simulating weather dynamics to come to a more natural, snowy conclusion.

Into the Dyatlov Pass

To properly explain the Dyatlov Pass Incident, any theory needs to reconcile all the peculiar bits of evidence found up on that mountainside. Rescuers found the hikers’ tent buried in snow with supplies still neatly set up. But the tent was slashed from the inside, evidence of a quick escape. Outside the tent were a jumble of footprints, some made with socks, some with boots, some barefoot — alarming in the winter, especially as it had been at least -5 degrees Fahrenheit at the time.

It took three months of searching to find all nine bodies, located 0.5 mile to 1 mile from the tent. Some were barely clothed, while others showed discoloration in their limbs. Five seemed merely bruised, but four of them had more severe injuries — one had a twisted neck, another a fractured skull. Two had multiple broken ribs and were missing their eyes; one was also missing her tongue.

Autopsies and inspection revealed more seemingly inexplicable findings. Some of the students’ clothing had traces of radiation. No evidence of foul play within the group or by an outside party could be found. According to the BBC, the lead investigator at the time also received reports of bright, burning objects in the sky that night. The investigation came to a close in 1959, with official reports stating the cause of death as hypothermia and frostbite, though that explanation does not account for many of these strange and gruesome details.

When rescuers found the tent on Feb. 26, 1959, it was buried in snow and had been cut open from the inside. (Credit: Dyatlov Memorial Foundation/Wikimedia Commons)

An Avalanche of Evidence?

In the decades after the incident, people have grasped for an explanation. Popular theories include everything from failed military experiments, government cover-ups, involvement with the Mansi people (an Indigenous group from the area), nuclear testing, yetis and even aliens. But one of the more plausible theories is an avalanche —  the same explanation put forth by the scientists in the new study.

Skeptics of the avalanche theory — which purports that a slab of tightly-packed snow was thrust onto the hikers’ tent by heavy winds — cite four main counterarguments that the study authors attempted to refute. First is that the snow slope was too shallow to cause an avalanche. Alexander Purzin, a geotechnical engineer at ETH Zurich and co-author of the new paper, says that it’s important to look at the topography beneath the surface. “It's not about how steep the slope is,” he explains. “It's important that the weak layer below has the right angle of internal friction.” When you examine that, he adds, you see it’s very possible to have an avalanche with such a mild looking slope.

Beyond that, skeptics say that there was too little snow at the site to indicate an avalanche. And if there was not enough snow, critics also argue, how could an avalanche have created such grisly injuries? Lastly, the only possible trigger for this avalanche would have been when the hikers cut into the snow to set up some shelter for their tent. But the travelers didn’t die until many hours after their tent was pitched, so why the delay? Puzrin and his co-author write that while the slope was destabilized by the hikers’ tent, it did not hold enough snow to immediately set off a snow slide. But that evening, katabatic winds, heavy gusts of freezing winds, transported more snow to the shaky slope. This, they theorize, led to a slab avalanche, where a 16-foot slab of hard, densely packed snow dislodged and fell on the campsite.

To assess how much bodily harm this slab could inflict, Puzrin and his co-author Johan Gaume created a computer model, inspired by the code used to animate the snow in Disney’s Frozen, to analyze how, exactly, the snow and ice would have behaved under that night's weather conditions. (According to National Geographic, Gaume was so dazzled by the movie's portrayal of snow that he flew out to Hollywood to ask Disney's animators how they did it.) Combined with data on cadaver strength taken from a General Motors experiment from the 1970s, Puzrin says the model demonstrated that the winds and dynamics of the proposed slab avalanche would lead to “exactly the trauma that was described in the autopsy report.” These injuries, while terrible, Puzrin says, were probably not immediately fatal, which explains how the hikers were found so far away from the tent — the less injured of the group likely tried to move and help their friends after the event.

Other evidence, like the missing eyes and tongue, could be explained by scavenging animals. And Russian officials released information about a radioactive contamination accident two years prior in a neighboring area that could explain the traces of contamination, Puzrin adds.

The avalanche theory has been around for a long time, but Puzrin says this time “the difference here is the quantification.” And responses to the model have been largely positive, he says, “including the Russian experts ... which was surprising to me.”

But even with this level of modeling, not everyone is in agreement.  “I don't agree at all with this [avalanche] theory," says archaeologist Richard Holmgren. "Even if there was a slab it doesn't explain everything." Holmgren has turned the Dyatlov Pass Incident into something of an obsession since he heard about it about 10 years ago. He was so taken by the tale that he recreated the hikers’ original expedition with a friend in the winter of 2019. They did it as precisely as they could, down to the dates they left, and where they pitched their tents. “It was really how it was in the diaries and photos at the time, except it was in color,” he recalls. “It’s like time stood still. Nothing changed.”

Puzrin’s paper includes katabatic winds in their theory, arguing that the heavy winds deposited snow to the slope, providing fuel for the avalanche. But Holmgren believes that katabatic winds alone were responsible for the travelers’ deaths. He thinks the heavy, forceful winds picked up so quickly that the travelers ran out abruptly as their tent was tipped, covering it with snow to keep it grounded. He also posits that the most of the injuries occurred after their deaths.

“We can never find any truth because it was so long ago,” says Holmgren. Working off of old reports and autopsies can only do so much. But more than that, he says “it will never get solved because we don't want it to get solved.” In other words, people thrive off of mystery, and we like it that way.

Puzrin agrees that the mystery is enticing, and that the avalanche theory is probably the most boring conclusion. But as a scientist, all he can do is provide some clarity, even if we can never know for certain what truly happened.