The Daring Ploy That Saved the Florida Panther

Decades ago, only eight known panthers roamed the wilds of Florida. Here’s how a handful of scientists and a vet detective saved a subspecies. 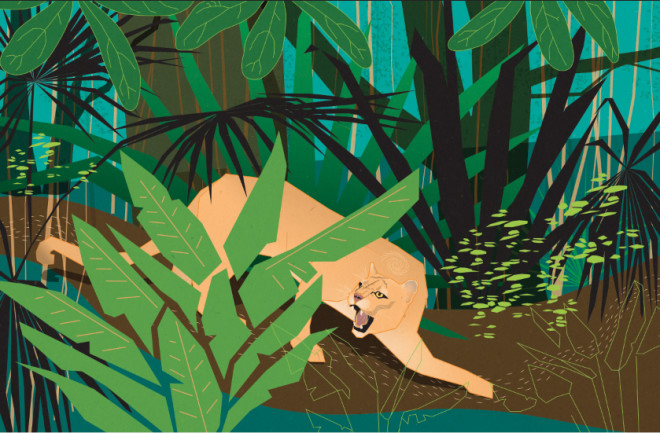 The calendar said Jan. 17, 1983. Chris Belden and his panther-capture team — two biologists, two trackers and a pack of hunting dogs — were searching for FP3. Florida Panther 3, as she was formally known, was the third of only eight documented big cats in the state.

Today’s quest took them into the rutted logging trails and thick brambles of the Fakahatchee Strand, also known as the Fak, a swampy state preserve east of Naples. Their goal was to tranquilize FP3 and replace the batteries in her tracking collar.

At about 11 a.m., the team’s dogs treed the 70-pound female in a 30-foot-tall oak. Nobody had a clear shot from the ground, so one of the hunters took a tranquilizer gun and climbed the tree. When he got about 18 feet off the ground, he took aim and fired. The dart went into the back side of the panther’s right hind leg, and the drug took effect in four minutes.

As they lowered the cat down with a rope, “blood was dripping from her nose,” Belden later wrote in a report. Once on the ground, they discovered “she was no longer breathing and there was no pulse.”

Two team members tried reviving the animal with mouth-to-mouth resuscitation, like a lifeguard with a drowning victim. They huffed and puffed, but to no avail.

“She was dead,” Belden wrote.

He felt miserable. Belden, a biologist, had once before seen a dead female panther from the Fak, and now his team had killed a second one. He was sure it was all his fault. He had used the same dosage that they had a year before to capture the same panther. What had gone wrong?

Belden slung the dead cat up onto his shoulders and began walking out of the swamp, leading his dejected team toward a reckoning.

“At that point,” he said years later, “I felt like I was carrying the whole subspecies on my shoulders. If the panther went extinct, it would be my fault. For all we knew, eight panthers were all that were left, and I had just killed one.”

As tragic as FP3’s death was, the loss of the animal would ultimately lead to the salvation of her subspecies. But first, the panther experts would have to navigate unexpected genetic dead ends, controversial technology and worrisome legal protections.

Don’t let the name fool you: Florida panthers are not part of the genus Panthera. Instead, they’re a subspecies of Puma concolor, also known as cougars or mountain lions. Because they’re a distinct subspecies with a population that dropped below 30 cats, they have special protections from the Endangered Species Act. FP3’s death prompted an investigation, including a necropsy.

When the University of Florida veterinarian’s report was completed, it didn’t specify what went wrong with the capture of FP3. It just said, “The cause of death cannot be ascertained based on tissue findings. It is likely that it is related to an untoward effect of the anesthesia.”

But the official verdict from the game commission was that the dart had hit the cat’s femoral artery, delivering its dose of drugs far too quickly. The cat was dead before it hit the ground.

Game commission officials decided to make a major change in the makeup of the capture team. Instead of a hunter and several biologists, they would add someone new to the mix — someone whose sole responsibility was to ensure the safety of the panther. They brought in a veterinarian.

Once on the team, wildlife vet Melody Roelke set out to solve the mystery of FP3’s death.

“When I first started,” Roelke says, “I was reviewing a tape of an old American Sportsman show, because they were there for the first capture of FP3. So I’m watching this animal on the ground, and it’s barely breathing. Me, looking at the animal, I can see she’s very, very deep in terms of how the anesthetic affected her.”

She knew then the dosage was too high. “Then the next year they capture her again and use the same dose. She never left the tree alive. That dose of the drug was too much for her.”

Roelke doesn’t blame Belden for what happened, though. Most wildlife agencies of the time trusted their biologists to handle the tranquilizer dart duties instead of sending out trained vets, she says. Sometimes, animals die from the wrong dosage. “It’s just a part of doing business. But if you’ve got a species where there’s only 30 left, and you kill one, that’s bad.”

That wasn’t the only mystery she wanted to solve. She was also looking for signs that the panthers, at the population level, were having the same problem as captive cheetahs she had studied in Oregon. “I came on board already looking for evidence of inbreeding,” Roelke says.

She found it pretty fast.

Roelke reviewed observations that the Florida capture team had made after years of tracking panthers, looking for signs of inbreeding. There were three identifying characteristics that made the Florida panthers different from other puma subspecies, such as those in the western U.S. or Mexico: They had a dramatic 90-degree kink in the end of their tails, a whorled cowlick in the fur on the middle of their backs and white flecks scattered around their necks. Every panther Belden’s team and their successors caught had these same three characteristics.

Eventually, the capture team figured out the white flecks were the result of ticks nibbling on panther flesh, so they ruled that the trait was not a defining characteristic that all panthers shared. But as captures continued, they saw that the kinked tail and the cowlick remained a consistent trait.

The cowlick wasn’t all that bothersome to the panthers — it’s a benign pattern in the fur. But a kink that bends a cat’s tail at a 90-degree angle so precise it could be used in a math textbook? That was wrong on the face of it. The five vertebrae that form the kink would not have bent that way naturally, Roelke decided.

She knew the kinked tails hinted at an underlying bottleneck in the species’ genetic makeup. A bottleneck happens when the population of a species or subspecies drops so dramatically that what remains no longer has a diverse gene pool. She’d seen the same phenomenon with cheetahs she had studied earlier in her career.

The next time the team captured a panther, Roelke collected samples of its skin, blood and poop. From that capture on, she would ship some of her samples to a geneticist at the National Institutes of Health in Maryland named Stephen O’Brien. She had met him while checking what was wrong with the cheetahs, and now she turned to him again to determine if another big cat had the same problem.

Roelke was so intent on solving this mystery that when she took vacation time, she didn’t leave the panther puzzle behind. Instead, she says, “I would go to British Columbia, to Colorado, to Chile, and work with the biologists there. That way I was able to collect comparative samples.”

Her suspicions were confirmed. The panthers were riddled with genetic defects due to inbreeding. Besides the kinked tail and the cowlick, Roelke learned the females also had a small hole in their hearts that caused a murmur, and the males in the Fak and the neighboring Big Cypress preserve had dangerously low sperm counts.

The situation was as dire as ever. To save the species would take a near miracle.

Filing into a lecture hall at White Oak Plantation Conservation Center in northern Florida on Oct. 21, 1992, nearly a decade after FP3’s accidental death, the panther experts all wore a grim look. Attempts to breed Florida panthers in captivity and release them into the wild had failed to replenish the species. The animals were teetering on the brink of extinction, and the bright minds studying the problem had failed to save them.

Usually, when people in Florida talk about “augmentation,” they’re talking about plastic surgery — specifically breast or butt implants. But genetic augmentation is something else. It’s all about fixing a fouled-up gene pool by introducing something fresh and new.

How do you genetically augment the poor Florida panther? By bringing in some other kind of puma to breed with it.

The panther panel recognized that this solution was legally questionable because of how it might affect the cats’ protection under the Endangered Species Act. The act gives the Fish and Wildlife Service the power to protect species, subspecies and distinct populations, as well as their habitats. What the act does not address is hybrids. Pushing the purebred panther to become more of a melting pot for puma genes might allow corporations or special interest groups to cite that as a reason to knock the Florida cats off the endangered list. They could use it as an excuse to open the already shrinking habitat for rampant development. There could even be a return of the hunting season.

Eventually, the debate shifted. Instead of arguing over whether to bring in another kind of puma to breed with the panthers, the experts started arguing over which puma to use.

The group backing genetic augmentation with a bunch of Texas cougars won the day. Although hailing from another state with considerably drier conditions, Texas cougars and Florida panthers are kissing cousins, genetically speaking. Plus, the cougars had already been used in breeding experiments with panthers.

In January 1995, all the bureaucrats involved gave the capture team the green light to bring eight female cougars from Texas and turn them loose in South Florida.

Who Let the Cats Out?

The biologists decided to release the female cougars in pairs. The first pair were taken to the Fak. There, near the end of an unpaved road 10 miles from the nearest house, they were put into a chain-link enclosure. The release plan called for keeping them penned up there for two weeks. They were fed deer meat and allowed to acclimate to the sights, smells and sounds of the swamp that was to be their new home.

Then, they were released into the wild.

By October, game commission officials were ready to hand out cigars. Their Hail Mary pass had become a touchdown.

One of the Texas females had given birth to two kittens, a male and a female. They appeared to be free of all genetic defects. No kinked tail. No cowlick. No heart murmur. No problems with their reproductive system. The cougars succeeded where nearly everyone expected yet another failure.

Three other females didn’t get to play their part. One was run over on a highway. Another was shot dead; no one knows why or by whom. One more died under uncertain circumstances. She had been pregnant at the time.

But the other five performed like champions. They adapted well to their new surroundings and produced litter after litter of defect-free kittens sired by the local male panthers.

Breeding with Texas cougars saved the Florida panther from extinction and even led to a baby boom. Now, more than 200 of the big cats roam the wilds of Florida. It’s not an astronomical number, but compared with the 1980s, the panthers are at least a few steps back from the brink of extinction.