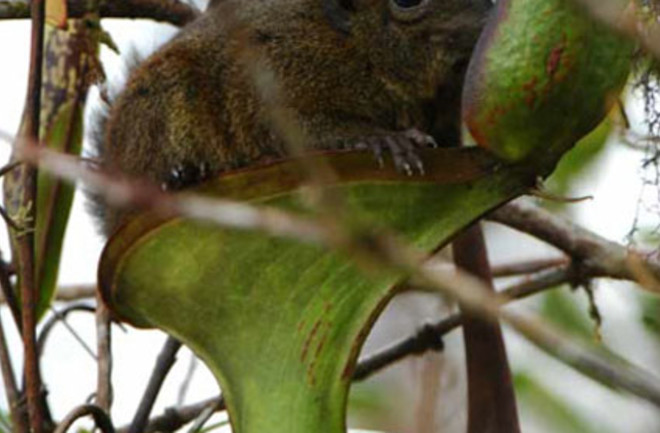 The giant montane pitcher plant is a botanical predator, ruthlessly luring in prey and feasting on its victims--except when it's not. Researchers have discovered that the carnivorous plant is mighty adaptable; when there's no prey around, it thrives just fine on the poop of a tree shrew that lives in Borneo's mountains. The pitcher plant is the world's largest meat-eating plant; in low altitudes it feeds on ants, small insects, and possibly even small rodents. The plant entices its prey with tasty nectar, and when the animals lose balance and drop into the fluid-filled pitcher, they're drowned and ingested. But in Borneo's higher altitudes, there aren't enough gullible and clumsy insects to keep the plant alive. So, evolutionary forces pressured the plant to tweak its design a bit to entice the tree shrew to pay it a visit and poop into it. The BBC describes the unique toilet-shaped plant:

N. rapah pitchers have huge orifices, but they also grow large concave lids held at an angle of about 90 degrees away from the orifice. The inside of these lids are covered with glands that exude huge amounts of nectar. Most importantly, the distance from the front of the pitcher's mouth to the glands corresponds exactly to the head to body length of mountain tree shrews.

The shrew perches on the plant to lick nectar from the "lid" and on most occasions it poops into the conveniently positioned toilet bowl to mark its territory. Scientists have yet to determine if the nectar has some sort of laxative qualities to it. The feces collect at the bottom of the plant and when it rains, the nutrients get flushed into the plant, where the nitrogen and phosphorous in the poo get absorbed as plant food. This toilet bowl system is so effective that the plant satisfies almost all its nutritional needs from the shrew feces. Jonathan Moran, one of the scientists who studied the relationship between the plant and the shrew, suggests that both parties evolved to sustain each other through a process called "mutualism." For the shrew, the pitcher plant's nectar is a rich source of sugar in the mountains; for the plant, the shrew's feces is food. You can listen to Moran explain the unique relationship in a radio program, CBC's "Quirks and Quarks" here. And here's a video of the tree shrew plopping into the pitcher plant for a quick snack. Related Content: 80beats: Real-Life Killer Tomatoes? Carnivorous Plants May Be All Around Us 80beats: Tiny Tree Shrews Live on Alcohol, but Never Get Drunk DISCOVER: The Plants That Eat Animals DISCOVER: Flesh-Eating Plants follows a botanist to Borneo in search of the rarest pitcher plant Image: Chi'en Lee