Scientists collected tens of thousands of plant fossils across Colombia — and found that the same asteroid strike that killed off the dinosaurs likely helped create modern South American rainforests. 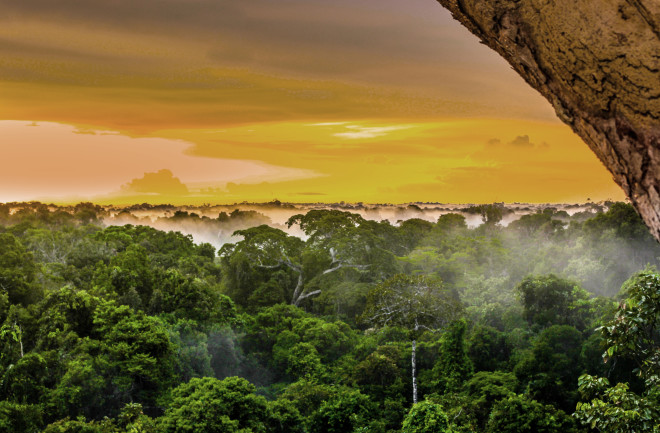 This article appeared in the January/February 2022 issue of Discover magazine as "Asteroid Aftergrowth." Become a subscriber for unlimited access to our archive.

A giant asteroid smashing into our planet sounds singularly catastrophic. But it might have also sparked environmental shifts that define Earth as we know it. New research suggests that the Chicxulub asteroid impact that most likely wiped out the dinosaurs also set the stage for modern neotropical rainforests like the Amazon.

Tens of thousands of plant and pollen fossils collected from rocks across Colombia have revealed that the collision — which took place 66 million years ago — led to drastic changes in rainforest plant diversity, according to a Science study published in April. “It’s staggering that the neotropical rainforests we see today are a byproduct of a single historical accident,” says Carlos Jaramillo, a paleopalynologist studying ancient plants at the Smithsonian Tropical Research Institute, and one of the study’s co-authors. “We are the product of history.”

Smithsonian Tropical Research Institute paleobotanist Mónica Carvalho, who led the study, and her colleagues found that the asteroid strike wiped out 45 percent of the plant species in what is now a neotropical rainforest. During the Cretaceous Period, the forests in the region were open canopy, meaning that the ground was open to the skies. The plants found in these forests were a mix of ferns, conifers and flowering plants. This habitat may have been maintained, in part, by the big, plant-eating dinosaurs who trampled or ate the undergrowth plants.

Afterwards, the types of plants that took over looked much different. Carvalho and her colleagues found that over millions of years after the impact, a new forest with a closed canopy slowly emerged. Plus, the plants that flourished were flowering plants, with much fewer conifers and ferns. They speculate that ash from the collision fell back to the ground thousands of miles away and enriched soils. That enrichment promoted flowering plants over their conifer cousins. At the same time, the loss of giant herbivores stomping about allowed the canopy to close, increasing competition for light in the shady habitat below and enabling a wider variety of plants to survive.

The study isn’t the only one to show how the Chicxulub asteroid impact rippled across the planet. The disruption caused by the collision also led to a massive oceanic algal bloom, fed by nutrients from the impact’s dust and the deep ocean, according to another 2021 study published in June in Geophysical Research Letters. These studies show that widespread extinction isn’t the sole outcome from an Earth-rattling calamity.