The Ancient Art of Tattooing

Our modern taste for ink is an outgrowth of traditions far older than you may realize. 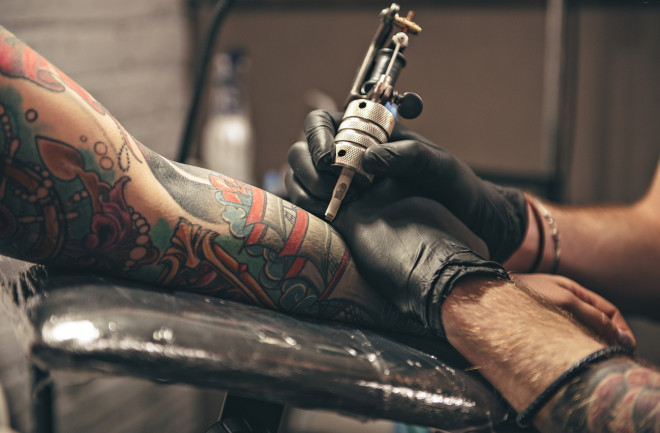 For thousands of years, humans have inscribed their bodies with symbols — to signal identity and status, to beautify, to express devotion, to protect and heal. We call these adornments tattoos, from the word tatau, meaning “to strike” in some Polynesian languages. While the practice is particularly dramatic and impressive there, people have pigmented their skin for one reason or another in just about every known culture.

At several Paleolithic sites throughout Europe, archaeologists have uncovered bone needles and other instruments that may have been used for tattooing tens of thousands of years ago, according to Steve Gilbert in The Tattoo History Source Book. Well-preserved skin is scarce, however, so no one can say for sure when our ancestors began modifying their bodies.

For a while, the oldest definitive evidence came from ancient Egypt, where several female mummies dated to the early Middle Kingdom displayed what were likely fertility symbols. That record was broken only in 1991 when two tourists discovered the mummified remains of Ötzi the Iceman in a glacier in the Italian Alps. He and his extensive ink — scientists count 61 tattoos — date back 5,300 years. Many of the patterns trace his spine, wrist and ankle joints. Because X-ray images indicate he suffered from arthritis and abdominal pain, some researchers believe his markings were meant to be therapeutic.

A reproduction of Ötzi the Iceman in the South Tyrol Museum of Archaeology in Italy. (Credit: Zigres/Shutterstock)

In more recent history, tattoos have come to signify anything and everything. The ancient Greeks used them to mark slaves and criminals, and the Romans extended this practice to soldiers. Neither civilization indulged in tattooing the general populace, however; they associated the ink with the Britons, Goths, Thracians and other so-called “barbarians” from which they wanted to distinguish themselves.

Animals, real and legendary, were a frequent source of inspiration for these groups and others around the world. One Scythian chief from the Pazyryk Valley in present-day Siberia, preserved in a tomb since the first millennium B.C., was discovered bedecked with what Gilbert calls “a variety of fantastic beasts” spanning his torso and limbs: a horse, a ram, a fish, two griffins and a pack of other, more monstrous creatures.

Animals are common subject matter in many cultures even today, often due to a perceived connection with the spirit of the animal. “It seems that tattooing in the ancient world had much in common with modern tattooing,” Gilbert writes, “and that tattooing the world over has profound and universal psychic origins.”

Given its widespread popularity, tattooing seems to be ingrained in human nature. Nevertheless, some tried to outlaw it in the past. According to early Judaism and Christianity, tattoos defiled a body made perfect by, and in the image of, their God. Leviticus 19:28 delivers a divine and unambiguous command: “Ye shall not make any cuttings in your flesh for the dead, nor print any marks upon you: I am the Lord.”

Roman Emperor Constantine outlawed facial tattooing when he converted to Christianity in 325 A.D. and Pope Hadrian forbade it altogether in the 8th century. For the next thousand years, Europe’s collective skin remained more or less unadorned. (Although many pilgrims to the Holy Land did commemorate their voyages with a tattooed cross or other symbol.)

In the meantime, tattoos thrived almost everywhere else. Anthropologist Lars Krutak explains that to many pagan peoples, who identified themselves by the cuts in their skin, “it would be sacrilegious not to be tattooed.” Indeed, in many parts of Polynesia, Asia, Africa and the Americas, tattoos were not individual choices but rather communal rites of passage. In contrast to Abrahamic ideals, Krutak says, they were necessary for acceptance in society: “If you weren’t marked, you would be ridiculed and shamed.”

A group of dancers, bearing traditional costumes and tattoos, in the French Polynesian island Nuku Hiva in 2017. (Credit: angela Meier/Shutterstock)

Some conveyed a person’s lineage, others marked the transition to adulthood, and still others recounted exploits on the battlefield. “They say something about your life story, your ancestors, your accomplishments, your territory,” Krutak says. “They all speak about this in some way or another, if you have the knowledge to read this visual language.”

It was traditions like these that European explorers stumbled upon just a few centuries ago, reigniting a Western interest in tattoos. When British explorer James Cook and his crew traveled to the South Pacific in the late 1700s, they encountered the native peoples of Tahiti, New Zealand and other islands, many of whom were covered in geometric shapes and spiral lines.

While some sailors were forcibly marked, others took a liking to this exotic art and even established tattoo parlors when they returned home. With their help, along with the influence of the more pictorial style of tattooing employed in Japan, the trend became fashionable once again in Europe.

These days, at least in the United States, tattoos are typically a means of self-expression or a way to honor the memory of loved ones. To some, they carry connotations of rebellious youth. But even if we mark ourselves in different ways, at different times and for different reasons, we are still participating in a ritual that captivated countless generations of our ancestors.

“Obviously there’s something that demands to be said that cannot be expressed via other methods,” Krutak says. He guesses the appeal of this medium has a lot to do with its permanence. A painting may burn and a vase may shatter, but tattoos are guaranteed to last as long as you do. “So much in life is impermanent, and [this is] something you carry on your body for the rest of your life.”