Mount St. Helens’ last big blast happened 40 years ago, but in the quieter years since, don’t forget that the Cascade Range still has explosive potential. 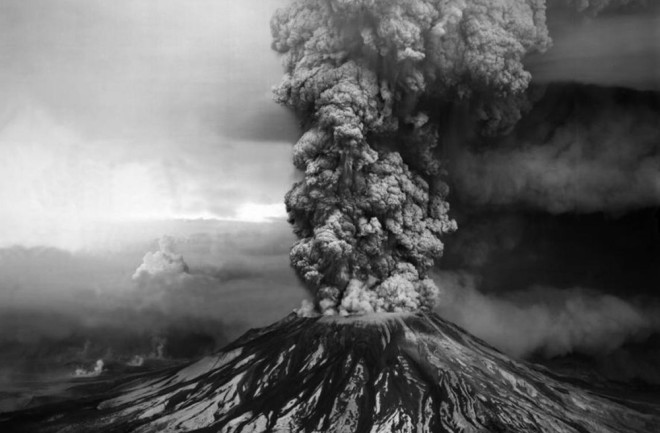 Today marks the 40th anniversary of the most important volcanic eruption in American history. Not only was the May 18, 1980, eruption of Mount St. Helens the largest explosive eruption ever in the lower 48 states, but it birthed modern volcano monitoring for the country.

Yet, since then, the Cascades have been relatively quiet, lulling many people into thinking that there isn’t much threat. That might be partially true: the Cascades are a strangely quiet volcanic arc, but that quiet could be broken by any number of volcanoes from Washington to California.

There is a plethora of articles about the 1980 Mount St. Helens eruption marking the anniversary. For the 30th anniversary, I compiled many people’s memories of the eruption, and they are well worth the read. It was an impressive blast that forever changed the volcano — an understatement considering the volcano lost most of summit and north side!

The May 18, 1980, eruption at Mount St. Helens wasn’t the most recent Cascade eruption. The volcano went on erupting until 1986, and came back to life for more eruptions from 2004 to 2008. Since then, all has been still.

The Last Blasts of the Cascades

You might be tempted to think that Mount St. Helens is the only threat the Cascades have to offer. So, I thought I’d look at each of the Cascade volcanoes, from Mount Baker in the north to Lassen Peak in the south, and remind you when the last eruption from those volcanoes happened. You’ll likely be surprised.

A view of Mount Baker in Washington. (Credit: lbh1239/Wikimedia Commons)

Mount Baker: In northern Washington state, Mount Baker had a series of explosive hydrothermal eruptions (driven by steam) from Sherman Crater in 1880, the same year that Thomas Edison founded the Edison Illuminating Company. The last major eruption was 6,700 years ago, when rice began to be cultivated in eastern China.

Glacier Peak: This remote volcano in Washington produced a massive eruption about 13,000 years ago that was five times the size of the Mount St. Helens eruption. However, the most recent eruption happened around A.D. 1700, the same year as the giant M9 Cascadia earthquake that spawned a Pacific-wide tsunami, while a larger eruption around 900 B.C. sent lahars (volcanic mudflows) almost 20 miles downriver.

Mount Rainier: The famous volcano that looms over Seattle and Tacoma might have had several small eruptions between 1840 and 1890, but the last confirmed eruption was around 1450 — it may have generated the massive Electron mudflow — when Gutenberg was printing his first Bibles. The last major explosive eruption happened around 250 B.C., when the Punic Wars were raging in the Roman Empire.

Mount Adams: Due east of Mount St. Helens, it’s actually one of the largest volcanoes in the Cascades. It likely last erupted around A.D. 950, the year that Erik the Red was likely born.

Mount Hood: The stark sentinel to the east of Portland, the eruptions seen in the 1850s may have been steam-driven explosions driven by leftover heat of the Old Maid dome. That lump of andesite lava was erupted around A.D. 1781, a few decades before Lewis and Clark reached this stretch of the Columbia River in Oregon. They found river channels leading from Mount Hood choked with sand, likely from mudflows generated during these eruptions.

Mount Jefferson: This remote beast in central Oregon looks beaten by glaciers, but it may have last erupted around A.D. 950, the same year Al-Farabi, the great Muslim philosopher, died.

Belknap Crater: It doesn’t look like your typical Cascade volcano, but this lava field between Jefferson and Three Sisters formed around A.D. 450, when Polynesian king Hawaiʻi Loa may have discovered the Hawaiian Islands.

A view across the Three Sisters, with the Rock Mesa and Devil’s Hills in the foreground. South, Middle and North trail to the background. (Credit: USGS)

Three Sisters: This is complicated. The Three Sisters area is actually three (or four? or five?) separate volcanoes. The most recent eruption in the area was Collier Cone, a cinder cone on the slopes of North Sister that likely formed A.D. 450 (the same time as Belknap Crater). On the slopes of South Sister, the Rock Mesa and Devil’s Hills rhyolite domes erupted around 50 and 350 B.C., when Mayan empire was flourishing in Mexico. The Three Sisters themselves were likely last active during the last Ice Age.

Newberry Caldera: To the east of Three Sisters is Newberry Caldera. The Big Obsidian Flow, inside the caldera, dumped 10 feet of ash on the area around A.D. 700, when the Chinese were inventing gunpowder.

Crater Lake (Mount Mazama): The most famous eruption was the caldera-forming blast that created Crater Lake around 5700 B.C. Reed sandals were found buried in Mazama ash, so people were definitely living around the volcano when that blast occurred. However, the most recent eruption happened in 2800 B.C. (around the time of the second dynasty of Egypt), when a dome formed at the bottom of the lake.

Medicine Lake: A little to the east of the main arc of the Cascades in northern California, Medicine Lake caldera last erupted around A.D. 1050, when the Glass Mountain rhyolite domes formed. This is the same time that Cahokia was being built in Illinois.

Mount Shasta: The largest Cascade volcano, it is really two volcanoes on top of each other — Shasta and Shastina, with a third (Black Butte) just to the west. The volcanoes have produced numerous small explosions over the past few thousand years. The most recent was likely around A.D. 1250, when Kublai Khan was rising to power in the Mongol Empire. The last known major blast at Shasta happened around 7600 B.C., around the time agriculture was spreading across North America.

Lassen Volcanic Center: Lassen Peak holds the mantle for the most recent eruption in the Cascades that didn’t happen at Mount St. Helens. The eruptions from 1914 to 1917 were relatively small, but they did produce mudflows and pyroclastic flows while the world was at war. Prior to this, Cinder Cone, a cinder cone just to the east of Lassen Peak, erupted in A.D. 1666, the same year as the Great Fire of London. Chaos Crags was formed when a series of rhyodacite domes erupted to the north of Lassen Peak. These domes, much larger than Lassen Peak itself, formed around 1,100 years ago, when the period of the Five Dynasties began in China.

Expect More in the Future

That’s a lot of eruptions over the past few thousand years! Keep that in mind when you think about the Cascades; they are still potentially active volcanoes, many with the ability to produce eruptions as large as, if not larger than, the 1980 Mount St. Helens blast. Luckily, the U.S. Geological Survey’s Cascades Volcano Observatory keeps a close watch on these slumbering giants. We’ll see them erupt again, but hopefully we’ll be prepared for whatever they might bring.