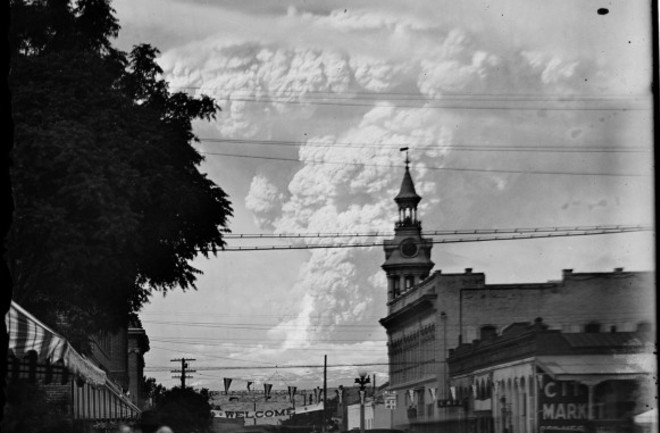 The May 22, 1915 eruption of Lassen Peak, seen from Red Bluff, CA. R.E. Stinson, NPS When most people think about Cascade volcanoes, it's places like St. Helens, Hood, and Rainier that all pop into their minds. However, other than Mount St. Helens, only one Cascade volcano has erupted since 1900 and that's California's Lassen Peak. The 100th anniversary of that eruption is this week, so I thought I'd take a look back at Lassen Peak's last blast. In the grand scheme of the Cascades, it was a tiny eruption, but it does remind us that volcanoes are a threat in California and that the Cascades are more than just St. Helens. The PastLassen Peak itself is only the latest manifestation of volcanism in the Cascades just to the east of Redding, California. There has been volcanism in that stretch of the Cascade arc for over 3 million years and the most recent volcanic cluster (the Lassen Volcanic Center, or LVC) has been rumbling for over 825,000 years. In fact, the second largest Cascade eruption (after Crater Lake's cataclysm event) came from the Rockland Caldera, which lays buried under younger volcanic material at the LVC. In-between the Rockland Caldera and the current LVC activity came Brokeoff Volcano (also known as Tehama), which likely looked like many of the other Cascade volcanoes that exist today, but has long since been eroded away save for a few pieces spread around Lassen Volcanic National Park. Since about ~300,000 year ago, the LVC has been in what we call the "Lassen Domefield" phase, where domes of sticky silicic lava (like andesite, dacite and rhyodacite) or cinder cones of runnier mafic lava (basaltic andesite mainly) erupt across the whole LVC. This is different than someplace like Rainier or Shasta, where all this volcanism builds up a big volcano. Instead, we get lots of smaller volcanic features (relatively speaking) that may never erupt in that same place again. Lassen Peak is one of the younger domes in the Lassen Domefield. Most of the edifice that is Lassen Peak is about 27,000 years old, which a large eruption spit out over 2 cubic kilometers of sticky lava to create the volcano. Since then, only one other eruption has occurred on Lassen Peak and that's the 1915 event. However, in other parts of the LVC, we're seen eruption, including the 1666 AD eruption of Cinder Cone and probably the biggest event at the LVC in the last 20,000 years, the eruption of the rhyodacite domes of Chaos Crags about 1,100 years ago. The Chaos Crags eruption dumped more than 1.1 cubic kilometers of lava into 5 domes and spread even more ash and volcanic debris across northern California (likely all being watched by Native peoples who lived in northern California at the time). The Eruption - the Prologue

A small phreatic explosion from Lassen Peak in 1914, driven by steam heating up inside the volcano. These were the precursors to the May 1915 eruption. B.F. Loomis / NPS After the 1666 eruption of Cinder Cone, things were pretty quiet in the LVC. This is all relative, of course. Bumpass Hell is an area of strong hydrothermal activity in the LVC bounds that shows that magma is beneath the surface, warming water that circulates down, creating hot springs, fumaroles and mudpots. It wasn't until late May 1914 that the recent settlers to California were awoken to the idea that Lassen Peak is an active volcano. For a year between May 1914 and May 1915, the volcano would occasionally produce small phreatic (steam-driven) explosions that would dust the area right around the volcano with ash. No new lava emerged, but these explosions betrayed the fact that magma was rising under the volcano. In May 1915, things began to pick up quickly. On May 14, 1915, people in towns as far as 20 miles away began to notice that the summit of Lassen Peak was glowing. That glow was from a small tongue of lava that was emerging from a crater at the summit of the volcano. For 6 days, lava slowly filled the crater and by the evening of May 19, the lava spilled out of the top of the crater and glowing boulders of hot lava rolled down the slopes of Lassen Peak. Later that night, the fireworks really began. An explosion rocked the volcano and, thanks to a snowy winter, all that hot volcanic debris encountered ~10 meters of snow on the upper slopes of the volcano. This created an avalanche of volcanic debris and snow that careened down the volcano, ripping up everything in its path. This flow was somewhere between a pyroclastic flow and a volcanic muddled (lahar), but too cool to be the former and too dry to be the latter. As it travelled down the slopes of the volcano, it created what is called the "Devastated Area" (see below) on the flanks of Lassen Peak.

A steaming Lassen Peak after the May 19, 1915 explosion that created the Devastated Area. The rock in the foreground was still hot with B.F. Loomis took this picture between May 19 and 22, 1915. B.F. Loomis / NPS Now, as this flow moved away from the volcano, it picked up more debris and water (from melted snow) and became a lahar that flowed down Hat Creek. This is a persistent theme for the 1915 eruption at Lassen Peak: pyroclastic flows that turn into mudflows as they end up in creek channels. The May 19 mudflow was 6-7 meters deep when it was moving, but then thinned out to leave a deposit ~2 meters deep. It travelled over 15 kilometers from the volcano and when it stopped, all the water came out of the flow, flooding the area it stopped (a hidden danger of mudflows). The May 19 flow moved blocks of Lassen Peak that weigh over 100 tonnes and some were stayed hot for weeks (see above) after the eruption. The Eruption - Main Event

The ash cloud from the May 22, 1915 eruption of Lassen Peak. B.F. Loomis / NPS That explosion and resulting flow on May 19 was only the precursory event before the main show. By the morning of May 20, new lava arrived in the vacated summit crater. Just like its predecessor, the lava filled up the crater slowly until the middle of the afternoon on May 22, 1915. Then events went sideways. Pressure that had been building beneath the dome finally was too much to hold back and Lassen Peak exploded. The volcano produced a volcanic plume that went upwards of ~10 kilometers (30,000 feet) in only 30 minutes. The plume was spotted as far away as Sacramento (200 kilometers south) and Eureka (230 kilometer west), while the ash itself was noticed falling as far east as Winnemuca in Nevada, over 300 kilometers to the east. This blast produced its own pyroclastic flow/mudflow that travelled 5 kilometers further down Hat Creek than the May 19 flow, along with smaller mudflows that cascaded down the other slopes of the volcano (but didn't travel nearly as far - see below). Near the volcano, 30 centimeters of pumice and ash piled up. The eruption was spectacular -- and one of the first in the U.S. to be caught on camera (see above) as the many images of B.F. Loomis and others show. Loomis captured important images from before and after the May 19-22 eruption and without these images, many of the details of the eruption might have been lost. The Eruption - Coda

Mudflows from the May 22, 1915 eruption of Lassen Peak show up starkly versus the snow on the slopes of the volcano. Taken May 24, 1915. B.F. Loomis / NPS And just like that, it was over. After the May 22 explosion, no more new lava was seen at Lassen Peak. In all, it was a little over a week that the volcano produced lava, but afterwards, just like before, small phreatic explosions would occasionally happen until 1917. Then only steam plumes until about 1921 ... and then quiet once again. When all was said and done, the 1915 eruption of Lassen Peak spit out a paltry 0.007 cubic kilometers of volcanic material and luckily, no one was hurt. That's 35 times less than the 1980 eruption of St. Helens, which itself was a fairly small eruption as volcanoes go. If you want to get more details on the 1915 eruption of Lassen Peak, watch this talk by USGS volcanologist Michael Clynne. The Magma So, what was actually erupted during the 1915 event? It turns out that multiple flavors of magma came up during this small and short eruption: a mixed and mingled magma. There is both a dark and light dacite magma, along with a dark andesite and you can find them as separate chunks or as a hybrid mix. All of this implies that there was a lot of interaction between a cooler, more silicic magma with a hotter, more mafic magma right before the eruption. Research that I've done on the 1915 eruption suggests that what we're seeing is the crystal mush (crystals plus leftover, cooling magma from previous eruptions) being heated up by a new injection of mafic magma and then all jumbled and mixed together just before and during the eruption. The best evidence of all this mixing and mingling with mush is that if you look at zircon crystals in the light and dark magma that were erupted, they cover the same age range. This means that the light and dark magma shared crystals at some point rather than being two completely separate batches of magma. The Future

Lassen Peak seen in July 2013, with the dark tongue of lava from the 1915 eruption seen in the rightmost summit saddle. Erik Klemetti The LVC is far from done. There will be more eruptions down the road. However, those eruptions are likely going to be in places away from Lassen Peak itself. The history of the LVC for the 100,000 years has new volcanic vents popping up in different places across the area rather than being focussed in one spot - in fact, the 1915 eruption might have fortuitously come up under Lassen Peak. The research done on the 1915 and Chaos Crags eruptions suggests that when a new eruption arrives, the events that lead up to them are likely short. There is no evidence of a big, liquid body of magma under the LVC, so new batches of magma able to erupt probably don't sit around long -- maybe only a few decades or centuries (that's geologically short). The 1915 eruption of Lassen Peak wasn't a big show, it was enough to prove that the Cascades are more that just St. Helens. However, that does lead to another question: why exactly have the Cascades been so quiet for the past 100 years? I'll tackle that question on Friday.

{This post is offered in memory of Dr. Todd Feeley, Lassen researcher and volcanologist.}