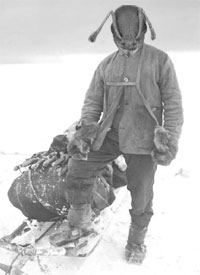 In 1912, Antarctic explorer Captain Lawrence Oates willingly walked to his death so that his failing health would not jeopardise his friends' odds of survival. Stepping from his tent into a raging blizzard, he left his men with the immortal words, "I am just going outside and may be some time." It was a legendary act of heroism but one that is mirrored by far tinier altruists on a regular basis - ants.

Like Captain Oates, workers of the ant species Temnothorax unifasciatus will also walk off to die in solitude, if they're carrying a fungal infection. In fact, Jurgen Heinze and Bartosz Walter found that workers, regardless of the reason for their demise, take their last breaths in a self-imposed quarantine. A Temnothorax worker may spend its life in the company of millions, but it dies alone.

In nature, old age is a luxury that few individuals can afford. Most often, death comes at the hands of predators or parasites. In the latter case, dying individuals pose a massive threat to their peers. In the closely-packed, humid environment of a nest, infections can spread like wildfire. Metarhizium only becomes infectious a few days after its host succumbs - it takes that long to produce new spores. And by that point, the ants are long gone.

Heinze and Walter treated 70 workers with spores of the parasitic fungus Metarhizium anisopliae. Three-quarters of them were dead within ten days. Of these, at least 70% voluntarily left the colony either hours or even days before that point and died well away from their nestmates. Another 21% were found dead outside the nests. It wasn't clear if they had left themselves or been evicted but certainly, the other ants don't treat infected workers any differently.

The tiny hermits never try to return home. They don't forage for food or water. They never try to get in touch with nestmates. If they're returned home, they'll actively try to flee again. As Heinze and Walter say, this appears to be "an active and, in most cases, adaptive response of the dying ant to its own condition." 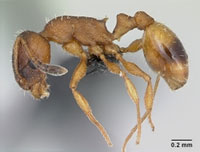 It's not just fungus that prompts these quarantines. Heinze and Walter found that they could trigger the same behaviour by exposing young and apparently healthy workers to extremely high levels of carbon dioxide, a treatment that causes ants to age prematurely.

Even ants that are dying of old age will leave the nest. The duo kept an eye on over 1,600 workers from 28 different colonies and found that 92% of those that died spontaneously left the nest beforehand. The only one that died back in the nest was mistakenly carried there by another worker! Unlike the infected workers, they started their reclusive spell around 1-15 days before they actually died, probably because their health wasn't failing as quickly.

The fact that workers showed the same behaviour, regardless of the cause of death, suggests that the self-imposed exiles aren't just part of the parasite's manipulations. Parasites can famously twist the wills of their hosts to increase their chances of finding another. For example, some fungi and liver flukes can make ants climb to the tips of grass stems before dying, so that the spores can be dispersed on the wind or the flukes could be eaten by another host - a bird. Either way, it looks very much like the ant has willingly marched off to die alone but its strings have actually been pulled by the parasite.

That's clearly not the case for the Temnothorax workers. Although the colony doesn't really benefit if a poisoned or old ant dies elsewhere, Heinze and Walter think that these are just side-effects of a general rule that says, "If you're dying, leave, in case it's something serious that could kill the others."

Similar strategies may be common in other social insects, like Temnothorax, that have very small colonies. With so few individuals, they can ill afford the risk of quarantining infected individuals in the nest or of assigning "undertakers" to evict sick ants to specific sites. Perhaps this behaviour explains why bees disappear from hives that are associated with colony collapse disorder - it's a case of morbid seclusion en masse.

Leaving the nest isn't just a passive end either. It actually accelerates the hermit's demise. If Heinze and Walter blocked the entrance to the colony after poisoning workers with carbon dioxide, they found that the affected individuals actually survived for longer than if they had managed to escape. Like Captain Oates, they accelerate their own deaths for the good of their kin.