10,000 Years of Eruptions in Less Than Two Minutes

When you look at it that way, volcanic eruptions start to seem like a rather normal occurence. 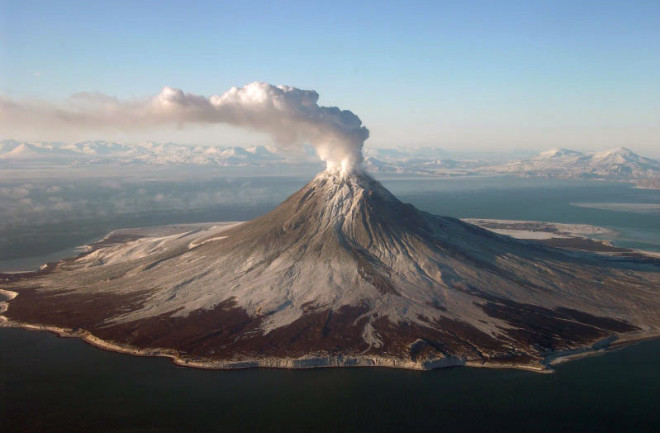 The steaming summit of Augustine in Alaska seen in January 2006. (Credit: Cyrus Read/USGS)

We live on a geologically active planet. This, of course, isn’t a shock to anyone but sometimes seeing just now active it is can be fascinating. ESRI put together a dynamic map (below) that captures worldwide volcanic activity over the past 10,000 years in just over 90 seconds. The planet lights up like a Christmas tree with eruptions of all sizes!

When you watch the video, a few things become apparent. Volcanism is concentrated in a lot of places you tend to associate with eruptions: Indonesia, New Guinea, Japan, West Indies, Kamchatka in Russia, Alaska, the Philippines, the Marianas, the Andes (although not the whole length), Central America, New Zealand, Hawai’i and Iceland.

Most of those (other than Hawai’i and Iceland, both of which are above mantle plumes) are places where an oceanic plate is being jammed back into the mantle as it collides with either another oceanic plate (for example, the West Indies) or a continental plate (for example, the Andes). We call these boundaries subduction zones. When these collisions occur, we get a lot of magma produced and with it, volcanoes.

However, there are likely a few spots that catch people by surprise. We can see multiple eruptions over the past 10,000 years in places that are unexpected, like American Desert Southwest (Arizona, Utah, Nevada), northern Iran and Turkey, Sudan, the Arabian Peninsula, North Korea and Taiwan. Although in many of these places it has been thousands of years since the last eruption, that is a blink of an eye for the life of a volcano, so we should expect that new eruptions might happen there in the future.

Let’s dispel one misconception that might come out of this video map: volcanic activity is not increasing. What is increasing is our awareness of volcanic eruptions, so even small burps from a volcano get recorded.

Much of the volcanic activity included in this map prior to a few hundred years ago comes from the geologic rather than historic record. Small eruptions don’t tend to get preserved in the geologic record, so they are not accounted for in the past. The record is, overall, biased towards large eruptions and eruptions near populations. As there are more people and better communication, we know about more eruptions.

Another missing piece in our planet’s volcanic lifestyle is the mid-ocean ridge system. This tectonic boundary, where two plates are moving away from each other as lava erupts between them, is spread across tens of thousands kilometers at the bottom on the oceans. There have been a multitude of small eruptions along the mid-ocean ridges over the past 10,000 years, but unless we happen to be thousands of feet beneath the surface of the oceans to see it happen, we miss that in the volcanic record.

What this map really captures is that, other than Jupiter’s moon Io, the Earth is hands down the most volcanically-active body in the solar system. For that, we can thank the heat produced inside the planet that drives plate tectonics. As we move into more and more places on the planet, we need to be ready to live with the fact that the planet is dynamic.