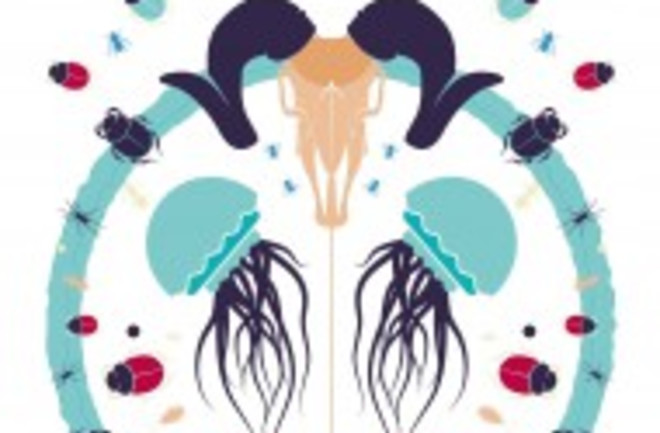 I process words for a living. A lot of those words, in peer-reviewed journals or rough first drafts, are not the liveliest of reads. I'm not complaining. It is, after all, how I justify a high-carb diet. A girl's gotta fuel her gray matter. So when a book lands on my desk that's funny and clever but also chock full of science, a book that's a genuine pleasure to read, I get excited. Such was British zoologist Jules Howard's 2014 title, Sex on Earth: A Celebration of Animal Reproduction (excerpted that year in Discover). Howard is back with a new book that tackles another big topic with his mix of insatiable curiosity, serious science and self-deprecating wit. It also happens to be a book right up Dead Things' alley. It's called Death on Earth: Adventures in Evolution and Mortality, but don't judge the book by its title. Okay, it is indeed an adventure, from hunting rare spiders to witnessing "Dracula Therapy" in a room full of people who want to live forever. But the book isn't about death so much as life: what it is, how we define it and why it ends. I caught up with Howard on the eve of the book's release to talk body farms, his scariest moment researching the book and the immortal clones likely hanging out in your birdbath right now.

What Pond Scum Figured Out That We Haven't

Q. Tiny bdelloid rotifers make an appearance in both of your books. Do you just have a thing for them or are they a handy go-to for explaining scientific truths (or, perhaps more to the point, organisms that challenge what we thought were scientific truths)?

Jules Howard: Bit of both! Sex is partly about mixing up genes to prevent monoculture populations emerging in which parasitic viruses and fungal infections run rampant. Sex is costly, but it works. Almost every animal plays by the simple rules of sex — except for a small handful of creatures like bdelloids. For them, the rules don’t seem to apply. By being able to dehydrate into a little husk, they’ve outsmarted the parasites and as a result, sex has little point to them. And so they flourish, clonally, across the world — immortals, in their own special way, sexless and deathless. They challenge our definitions of life and death (which is pretty cool considering most people think of them as mindless pond scum).

Q. What was your inspiration for writing a book about death?

Howard: It was never my intention to write a book about death. I’m not a “We're all going to die!” sort of person. I’m not ok with the idea of dying. But the more I wrote about zoology, the more I realized that death is there, everywhere, in the background, barely noticed or written about. I often think about insects when talking about this subject. Nearly all insects are going to die soon: bad weather, predatory birds, fungal infection — it’s a dangerous world for them. This is why, on the whole, their life histories are hurried and their sex lives are brutal; the world has filled up with those individual insects that don’t take their time about sex. In insects, quick sex sells. Now think of a mammal. Think of chimps. Being big, social and adaptable creatures, their chances of death each year are comparatively tiny. What’s interesting to me is how natural selection often stretches the lifespans out of those animals least likely to die. Insects and apes: two different ways of life, each chiseled by their own statistical chances of death. To me, writing this book, every animal ended up having an imaginary neon light over its head displaying its probability of death: what’s interesting is how this probability affects the life it leads. That’s one of the stories I wanted to tell.

The Circle of Life

Q. Were there any experiences as you researched Death on Earth that stick with you in a less than comfortable way? (Please share…there's nothing I enjoy more than making my guests uncomfortable.)

Howard: Where do I start? There is the bit on those strange parasitic caterpillars that make great tubes of silk that dangle from trees. There’s stuff on guano mountains. There’s stuff on impossibly weird and rare money-spiders. For me, worse than all of these things perhaps, was visiting an anti-aging technology conference and seeing lots and lots of shiny people utterly refusing to accept the zoological rules of life: that you’re born, you age, you die.

Q. Were there points during the book's gestation that, say, your spouse or friends or postal carrier said, "No. Really. I don't want to hear about what you did at work today," or perhaps just avoided you?

Howard: Honestly, I thought that people would be like that but… strangely, no. I think if I’d said: “Let me tell you about a rotting pig I tore apart!” people would be ready to pull back, but this wasn’t the ghoulish side of death that I wanted to portray. The story I wanted to tell was about how a lifeless object like a dead pig can become an ecosystem in its own right, home to countless tiny wasps, beetles, flies, centipedes and other invertebrates. People were quite responsive to this attitude. It’s cliché to go on about how “death breeds life” but it really does. The pigs, and chapters covering animals like them, are worthy of celebrating, I hope.

Kidding Around When It Comes to Death

Q. Having researched not only death but life and how we define it, has this book changed your worldview in a profound way?

Howard: I would say that spending months and months and months and months writing about and researching the topic of death has given me a better perspective on life; this is something that I’ve heard proper "death-writers" also say. In the real world (away from writing) I spend a lot of my time working with young people, talking about careers in zoology and paleontology. I’ve taken to showing them an image of a massive sedimentary rock cliff, on which you can see lots of geological time zones. I point to where our age begins, at the very top of the cliff, and I hear myself telling the children that every single part of their lives will one day be represented in a millimeter of rock. The teachers often look horrified about me saying this but the kids are always like: “Cool!” I feel like them now. It is cool. Yep, I think I’ve changed. I think I used to be like the teachers. Now I’m a kid again.

More From Discover
Health
Walking vs. Running Benefits: Should You Walk or Run for Exercise?
Technology
What Is a Social Media Cleanse?
Mind
Gut Bacteria's Role in Anxiety and Depression: It’s Not Just In Your Head
Mind
What Psilocybin Psychedelic Mushrooms Are Teaching Us About Human Consciousness
Health
Is Vitamin C Actually an Effective Cold Remedy?
Health
Why Walking Might Be One of the Best Exercises For Health
Recommendations From Our Store
My Science ShopDiscover STEM Kits
My Science ShopDiscover 2022 Calendar
My Science ShopStrange Science
My Science ShopElements Flashcards
Shop Now
Stay Curious
Join
Our List