Take A Look At This Wee Spinosaurus Fossil! 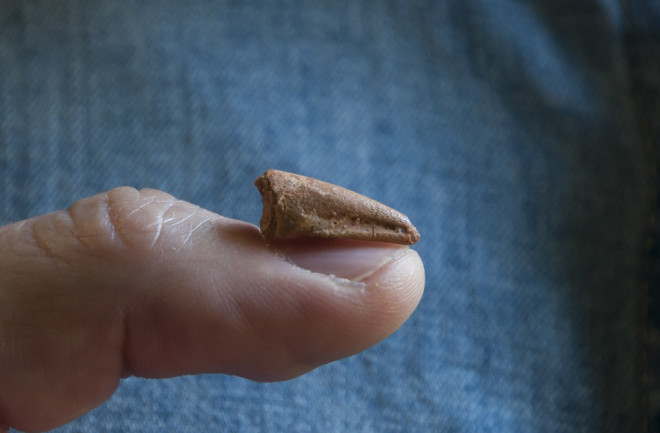 This tiny toe tip of a baby Spinosaurus reveals a surprisingly big piece of information about the famous dinosaur. (Credit G. Bindellini) Big paleontological news can come in teensy packages, as shown by a new study on a fragment of a very young Spinosaurus, one of the most fascinating flesh-eating (in this case, fish-eating) dinosaurs. You remember Spinosaurus, right? And I'm not talking about its cheesy guest role in the worst of the Jurassic Park sequels. I'm talking about the animal believed to be the largest carnivorous dinosaur, lost to science in WWII and then rediscovered with a whirl of controversy over whether it was aquatic, semi-aquatic or even a legitimate species. Research earlier this year that provided further evidence Spinosaurus was primarily a fish-eater boosted the case for its watery ways, but its lifestyle choices continue to be contested by some paleontologists. Well, it's back in the news, this time in fun-size form. Researchers this week described single ungual bone — essentially, the tip of one of the tiny toes on its back foot — as having a shape identical to the same bone in adult Spinosaurus. That shape, suggesting feet that were flatter, broader and paddle-like, is distinctly spinosaurid and was one of the traits that led researchers to believe the massive sail-backed fish-eaters spent most if not all of their time in the broad river systems of North Africa during the middle of the Cretaceous Period. Some modern dinosaurs have a similarly shaped foot: shorebirds that walk on sandy beaches and other soft surfaces. By analyzing pitting present on the bone that is seen in hatchlings (but disappears as the animal matures), the researchers believe the toe tip belonged to a very young Spinosaurus. Despite its age, if juvenile proportions are similar to those of adults, the animal was likely about 1.78 meters long; that's about the height of the average American adult male. The 100-million-year-old toe bit is not new to science; it was found in 1999 during an excavation of Morocco's famously fossiliferous Kem Kem Beds and sat on a museum shelf in Milan for nearly 20 years.

Size matters: compare this trio of Spinosaurus reconstructions based on fossil finds from Morocco: a baby, MSNM V6894, based on the newly described fossil, and two other examples, including the largest, MSNM V4047 (known from a snout fragment), with a puny human (1.75 m tall) for scale. (Credit Marco Auditore and Prehistoric Minds) Though the poor little Spinobaby's time on Earth was brief, it left a legacy: the adult-like shape of its specialized toe suggests that the juvenile Spinosaurus spent as much time swimming and shore-strolling as the big'uns. Although fragmentary finds make it difficult to say with confidence, this little guy appears to be the latest example of a dinosaur that came into the world essentially looking like a mini-adult and grew to epic size. The open access study was published this week in PeerJ.