T. Rex May Have Been a Hot-Blooded, Sweaty Beast 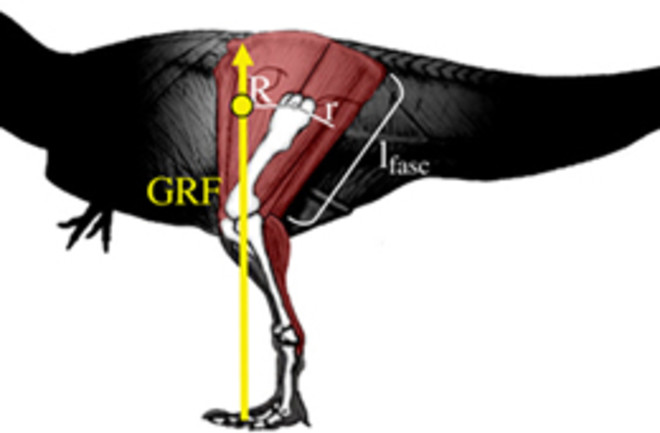 The world domination achieved by such fearsome bipedal dinosaurs as the T. rex may have been a result of their warm-blooded biology, according to new research.

For decades, scientists assumed that because dinosaurs resembled lizards, they were cold-blooded as well, their internal temperature rising and falling with the outside world. However, birds are warm-blooded, and the fact that birds seem to be descended from dinosaurs raises the question of whether their ancestors were as well [LiveScience].

The new study, published in the journal PLoS ONE, examined the anatomy of 14 species of bipedal dinosaurs, and argues that many of them needed more energy to power their massive leg muscles than a cold-blooded metabolism could provide. Lead researcher Herman Pontzer based his

findings on the estimated amount of energy dinosaurs must have expended moving about. Recent research by Dr Pontzer has shown that the energy cost of walking and running is strongly associated with leg length. Hip height - the distance from the hip joint to the ground - can predict the observed cost of locomotion with 98 per cent accuracy for a wide range of land animals [Telegraph].

The research team also used measurements of fossilized leg bones to determine the leg muscle mass of each species, and found that the muscles would have required a great deal of energy during walking and running. The dinosaurs would have benefited from a warm-blooded metabolism, Pontzer says, because they could have been agile and active even when the temperature dipped, and could have therefore spread through areas with colder climates. But there would also have been a downside:

Maintaining a stable internal temperature ... costs a lot of energy and requires the animals to feed more regularly [The Guardian].

At any rate, the new results aren't likely to convince paleontologists who aren't in the warm-blooded camp, and you can expect the debate to continue. Related Content: 80beats: Miniature T. Rex Was a Man-Sized Monster 80beats: How Did Dinosaurs Get So Big? Maybe Because They Were Couch Potatoes DISCOVER: Distinctive Dinosaur Death Throes DISCOVER: How to Build a T. RexImage: PLoS ONE / Herman Pontzer, et al.